Initiatives falling within the Freshwater Programme to date include: 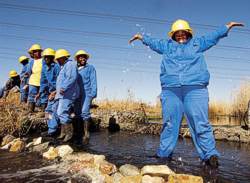 Reason for our programme

Recognising the value and threatened status of South Africa’s freshwater biodiversity, and the need to build competence and leadership in this area, SANBI has established a programme focusing on freshwater biodiversity. This is in line with the establishment of other biome and ecosystem programmes within the institute. The freshwater programme promotes integration, coordination and synergy between initiatives, thereby allowing a programmatic approach to be adopted.

Working for Wetlands started rehabilitating wetlands throughout South Africa 10 years ago. Currently there are 40 projects in all provinces that see to it that degraded wetlands are rehabilitated.