The angulate tortoise is the only species in the genus Chersina, and it is endemic to southern Africa. It has striking markings on its beautiful shell, which is used for protection. The tortoise will usually retract its head, feet and tail into the shell when threatened. Another defence mechanism is that it will readily eject the liquid contents of the bowels when handled, often spraying it some distance. Their adaptability and hardiness allow them to thrive in captivity, in which the species has been recorded to live for up to 32 years.

The angulate tortoise is considered not threatened and is common and abundant in its home range. The angulate tortoise is used as a food source by people living in rural areas of the Karoo and is also often kept as a pet. Its trade is, however, closely controlled, because it is listed on CITES Appendix II and it is a protected species in South Africa and Namibia.

How to recognise an angulate tortoise

They are the only tortoises on the African continent with a single throat shield. Males differ from females in size, shell profile, shell dimensions, the shape of the supracaudal shield, tail length, anal notch, and in the presence of a plastral concavity. Mature males have a carapace (upper section of the shell) that is elongate and flared at the front and back. Females have a pronounced dome and steep sides towards the rear. The weakly hooked beak is rarely serrated. They have bent forelegs with five claws on the front feet and four on each of the back feet. Buttock tubercles are absent and the tail lacks a terminal spine. The angulate tortoise has a dark grey or black shield with a yellow centre around the dark areola. The marginal shields have alternating triangles of black or yellow that extend from the edge of the shell, up the edge of the costals.

The colour pattern in this species is variable; light brown and black is the more common pattern. The plastron (belly) is red-brown with a black centre. These individuals are found in the Western Cape and it is this brick-red colour that gives the species the common name rooipens or “red belly”. 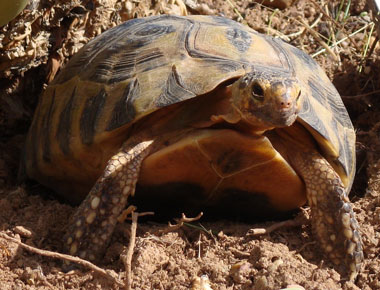 Generally, tortoises are remarkably slow movers. Over short distances the eyesight of most tortoises appears to be good.

Tortoises are loners, unless it is mating season when males pursue the females.

The angulate tortoise is mainly restricted to the south-western parts of South Africa, with isolated recordings of sightings in southwestern Namibia. Its distribution follows the coastline from southwestern Namibia, through the Northern and Western Cape provinces, to the Eastern Cape. A population of these tortoises is found in the Karoo National Park, in the Great Karoo. They also occur on the Robben, Dassen and Dyer islands. They have probably been introduced to the latter two islands, but they may have a natural presence on Robben Island.

This species is found in a wide variety of vegetation types, ranging from sandy coastal regions and coastal fynbos in the west to mesic thicket in the east. Isolated, inland populations are equally at home inmoister habitats with higher rainfall. Both sexes wander around similar-sized home ranges of up to 2 ha (often smaller in moister habitats). 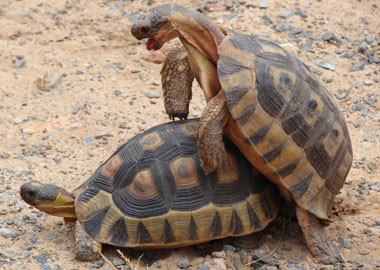 Males do not defend territories, even though they live in high densities. Dominant males prevent other males from mating with females. The angulate tortoise’s lifespan is more than 30 years and sexual maturity for both males and females is reached at 10–12 years. During the mating season, which lasts from September to April, male angulate tortoises exhibit intensive male-male combat. This involves vigorous ramming and use of the enlarged gular to overturn the opponent. These battles may be fierce, as breeding males try to flip one another over until one combatant runs away or is left on its back. By vigorously kicking out its legs and shaking its head, an overturned tortoise can usually right itself. The kicking and shaking causes the tortoise to rock from side-to-side until a foot or the head can find some grip; then it will flip itself over. The conquered male will wait until the victor has moved off to right himself. If he is unsuccessful, he can die from exposure. Larger males usually win the fights and this gives them access to the females. For this reason, the males grow larger than the females (in most other tortoise species the females are larger). It is not easy for sneaky male subordinates to mate without being spotted as tortoise mating is prolonged and noisy. Courtship involves the male in persistent pursuit of the female with head bobbing, nudging and the emission of soft grunts. Mounting the female is facilitated by the male’s concave plastron (the lower section of the chelonian shell) and in order to maintain this position, the male will use his forelimbs to grip the female`s carapace (the upper section of a chelonian shell). This is then followed by louder grunts, gasps and wheezes until copulation eventually happens.

Females can store sperm for extended periods before using it for fertilisation. The fertilised ovum is coated by albumen and then a shell layer forms around the egg. The egg is retained in the tortoise body for a period that varies from 23 to 212 days, depending on the ambient temperature and rainfall (Hofmeyer 2004). Once the egg is fully developed, rainfall stimulates egg laying and the female will usually start searching for a suitable nesting site shortly after the rain has softened the ground. The hole is about 100 mm wide and within it there is a smaller chamber about 40 mm wide and deep. The female uses the claws of her hind feet to break up the soil, which she then pushes away with the side of her lower leg. She lays a single, hard-shelled, round egg, 30–35 × 37–42 mm in size and weighing 20–25 g. After egg-laying is completed, the female fills the nest and then gently tamps down the soil with her shell. The whole nesting process can take 2 to 3 hours. Depending on the season, incubation takes 90 to 200 days. Hatchlings weigh 8 to 12 g and emerge after the first autumn rains. In ideal conditions, female angulate tortoises can produce six clutches of eggs per year. 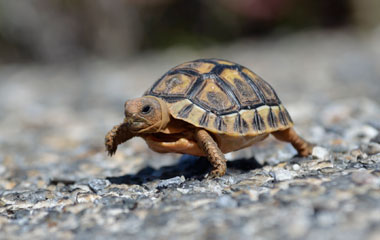 Chersina angulata has many enemies, the worst of which are humans. This is because humans are responsible for habitat destruction through indiscriminate agricultural and urban development and illegal collecting of wild tortoises for the pet trade. The tortoises are also vulnerable to veld fires; strong, fast wildfires in sandy habitats can have a negative effect on the population numbers. Other enemies include small carnivores, baboons, rock monitors, secretary birds, sea gulls and crows. Hatchlings have been found skewered on thorn trees by fiscal shrikes. The domestic dog can be added to the list and when a tortoise ends up in the road, some motorists deliberately run them over.

They have a number of tricks allowing them to withstand dry spells. A tortoise’s skin is dry and impermeable, so that water loss through the skin is greatly reduced. During the heat of the day, tortoises avoid activity, not just to escape overheating, but also to avoid water loss from dry wind. They are active in the morning and evening in late spring and summer, displaying bimodal activity and sheltering at midday. They are active throughout the day at other times. The angulate tortoise also makes optimal use of scarce water resources in the dry season, for example it is able to orientate its body and shell so that the water droplets that accumulate on its shell during wet conditions (e.g. dew accumulation in the morning) flow and accumulate around its head, and the water is later sucked up through the nose (Hofmeyer 2009). It is also thought to be able to survive fire by burrowing into sand or by taking refuge among rocks (Stuart & Meakin 1983; Wright 1988). The angulate tortoise has defence mechanisms such as the use of its shell as a refuge and protection when threatened and it will readily eject the liquid contents of its bowels when handled, often spraying it some distance.

This tortoise eats large quantities of plants, as a result their scats are full of undamaged seeds. They are ideal seed dispersers as they defecate inside bushes giving seeds a better chance of germination and survival.

Children are often fascinated when they see tortoises moving about. They are often kept as pets, though trade is restricted by regulations. The angulate tortoise is utilised as a food source by people living in rural areas of the Karoo. 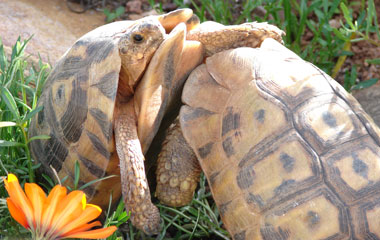 The angulate tortoise is considered not threatened, as it is common and abundant in home ranges. It is, however, listed on the CITES Appendix II, together with other tortoise species that are not necessarily now threatened with extinction but that may become so unless trade is closely controlled. In South Africa it is further classified as a protected species by the Nature Conservation Ordinance No. 19 of 1974 (as amended in 2000) and it may not be collected, transported, or possessed in, or imported into or exported from, the Western Cape Province without special permission in the form of a permit from the relevant conservation authorities. Similarly, the species is also classified as a protected species in Namibia. Wild tortoises should be left in their natural habitat where they belong.