Derivation of common nameThe word “chacma” is derived from the Hottentot (Khoikhoi) name for baboon, viz choachamma or choa kamma.

Chacma baboons (P. ursinus) are the largest members of the monkey family and are a highly social species that live in groups of four to 200 individuals. Within a troop, adult males form a dominance hierarchy that is established and maintained by fighting and aggression. Male ranking is unstable (6–12 months), because young males tend to emigrate between troops and high ranking males frequently lose their status to younger immigrants. In contrast, females remain in their natal groups and form strong hierarchies that transcend generations. Chacma baboons are largely omnivorous and are common in savannah woodland, steppes and sub-desert, montane regions (e.g. Drakensberg Mountains), Cape Fynbos and Succulent Karoo areas of southern Africa. Although the species is not threatened, increasing overlap between their natural range and human settlements has resulted in human-wildlife conflict.

How to recocognise a chacma baboon

Chacma baboons are large, hairy, terrestrial monkeys that have a dog-like head, with a prominent muzzle and a heavy brow above beady, close-set eyes. Males have long (about 5 cm), razor-sharp canine teeth and a dark mane on the neck and shoulders. 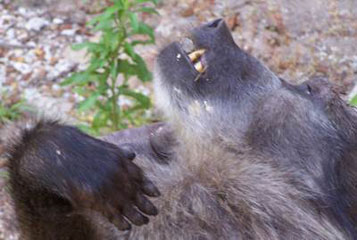 Their fur is coarse, short and varies in colour from grey to nearly black, with grey-brown being common. They have long limbs with the arms being longer than the legs. The hands and feet have long and dexterous digits. The black-footed P. u. ursinus is larger and heavier than the grey-footed P. u. griseipes. 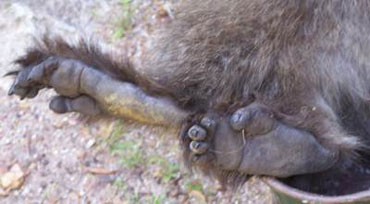 Chacma baboons are sexually dimorphic and males are physically bigger than the females. A male Chacma baboon may weigh between 30 and 40 kg, while the female may weigh about 15–20 kg. Males have a single, hard pad of naked grey skin that extends across both buttocks, but the female buttock-pads are pink, and at the onset of the menstrual cycle the skin becomes bright and swollen.

Chacma baboons are terrestrial and diurnal, meaning that they spend most of their daylight hours foraging on the ground and in the trees, and at night they sleep in trees or on cliffs where they are safe from predators. They walk on all four legs with their tails held in an arch.

A baboon uses facial expressions and body postures to communicate its level of excitement, anger and arousal. Friendly behavior is associated with non-threatening behavior such as soft grunts, avoiding eye contact and retracting lips to display clenched teeth. Presentation of the rump is used as an invitation by sexually receptive females and also as a conciliatory signal by baboons of both sexes. Adult males may sit with their erect penis in full view to communicate to other males that an adult is present in the troop. This also occurs when the male is on guard.

Aggressive behavior is associated with staring fixedly at an individual, displaying canine teeth and thrusting head and body postures that may be accompanied by shaking of grass and tree branches.

Baboons have a wide range of vocal signals that can be graded into one another and combined with each other and with visual signals in complex and subtle social communication.

The well-known ‘bokkum’ double bark is an alarm and aggressive signal given only by high-ranking males when there is inter- or intra-group aggression between males, and when a predator is nearby. The call also communicates male presence and arousal.

The alarm call for the other low ranking group members is a shrill single bark. This call is emitted in reaction to a sudden disturbance. A single dog-like bark is given when one part of the troop re-joins another. Grunts with subtly different intonation can signal contentment, desire for contact, or mild aggression. For example, females in oestrus emit a muffled growl during copulation.

Baboons can also use deceitful signals. An infant can scream in apparent alarm to incite its mother to attack another female who has some food that the infant wants. False alarms or false alarm reactions, or panic at a minor disturbance, are used by subordinates to distract attacking dominants.

When two individuals meet each other they touch noses as a friendly sign.Social grooming is used to reinforce social bonds, as well as to remove parasites and debris from the fur. Social mounting serves to signal a friendly reassurance. 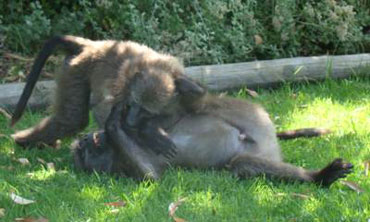 Chacma baboons are found in the southern African countries of Angola, Botswana, Mozambique, Namibia, South Africa, Zambia and Zimbabwe. The subspecies P. u. griseipes is found in south-west Zambia, Botswana (Okavango Delta), Zimbabwe and Mozambique, while P. u. ursinus occurs in the remainder of the range, South Africa and Namibia.

Chacma baboons inhabit a wide range of habitats and are common in woodland, savanna, steppes and sub-desert, montane regions of the Drakensberg, Cape Fynbos and Succulent Karoo. They normally occur in areas with adequate food and water supply and suitable night resting places such trees or high, rocky outcrops.

Chacma baboons are opportunistic omnivores that feed on a wide range of food items and are able to change their diet relative to what is available in the environment. They prefer feeding on bulbs, shoots, roots, seeds or fruit. Their diet also includes invertebrates, small vertebrates and seashore life. Fungi and lichens are eaten as and when they are available. They will also feed on refuse from human settlements.

Even though the chacma baboon diet is diverse and flexible, they are also highly selective in their food choices, with nutrient composition playing a large role in food selection. Reports claim that baboons typically choose foods that are high in protein and lipids and low in fibre and potential toxins.

Chacma baboons that reside near human settlements may opt for an easy solution to getting food by directly stealing food from homes, game lodges, and picnic spots in national parks. In some cases, humans deliberately feedbaboons thus reinforcing the baboons’ perception of an association between humans and food and further attracting baboons to human-frequented areas.

Young baboons learn what is good and safe to eat, and how to go about getting it, by watching their mothers and other older members of the troop. New food sources are usually discovered by inquisitive young baboons, and the knowledge quickly spreads to the rest of the troop. 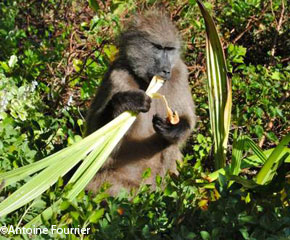 Chacma baboons may live in troops of 15 to 100 or more individuals. Large troop numbers confer chacma baboons with an advantage when hunting and avoiding predation. Within a troop, adult males form a dominance hierarchy that is established and maintained by fighting and visual displays of aggression such as staring, display of canine teeth and chasing. The dominance hierarchies within a given troop influence access to food and amongst males, access to mates. Males tend to leave the troop when they reach adulthood and will often change troops several times during their lives because of successional battles for access to mates. As a result, male ranking is unstable, with high ranking males frequently losing their status to younger immigrants. In contrast, females remain in the group in which they were born and form strong hierarchies that span generations.

Grooming is an important social interaction activity that is used to form and strengthen relationships among troop members. For example, male-female grooming is used to form short term relationships during courtships, and during nursing, females may consort with certain male members of the troop to protect their infants from infanticidal males. In female to female interactions, subordinate females may use grooming to gain acceptance and reduced harassment from dominant females in the troop. Reciprocal grooming is also common and can lead to strong long-term relationships among related and/or unrelated females of the same age or rank. 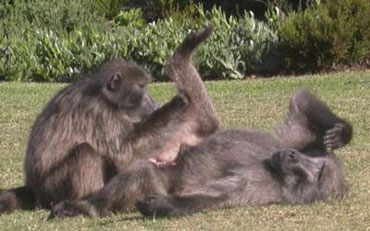 Chacma baboons breed throughout the year. Sexual maturity is reached at five years for both sexes, although young males often only start breeding at seven to ten years when they have grown big enough to challenge the dominant males.

The female reproductive cycle is about 36 days. When a female is sexually receptive, her posterior swells and becomes bright pink. This sexual swelling is at its peak for a few days just before ovulation. Mating activity intensifies around this period and reproductive success depends on mate choice by females and hierarchy rank of males. Females prefer to mate with the dominant male(s), and dominant males further prevent access to females by subdominant males through aggressive suppression. Occasionally, subordinate males mate with receptive females if they get the chance. The gestation period is six months. Infants are weaned after six months but they remain dependent on their mothers for protection and guidance until they are about two years old. Females give birth every two years, but the rate of reproduction can be depressed by high population density and adverse environmental conditions such as extreme heat and drought. Parental care is largely by the mother but males are highly protective of their offspring and occasionally “babysit” the young ones while the mother forages. Infanticide by males may occur during succession where the new dominant male kills the young offspring of their predecessor in order to bring the lactating females back into oestrous and sire their own offspring. They can also induce miscarriage through harassment of pregnant females. The average lifespan of chacma baboons is 30 to 40 years. 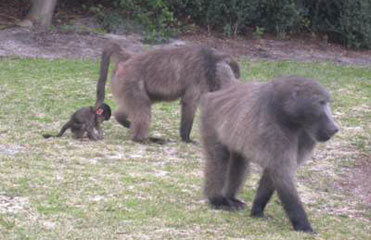 Chacma baboons have cheek pouches the size of their stomach in which they can store food. These animals require daily water intake to survive, but in water-scarce areas such as parts of Namibia, they can survive for as long as 20 days without water by eating food with a high water content.

Large troop numbers confer chacma baboons with an advantage when hunting and avoiding predation. Chacma baboons spend their nights in trees, high ridges, on cliffs or in caves to avoid predation. Chacma baboons are very vigilant and are usually on guard, especially when moving through cover that could conceal a predator. If danger is detected, a warning bark is issued to alert the troop and members seek refuge in trees and rocky outcrops. Male Chacma baboons may gang up on a predator and even kill it using their long, sharp canine teeth.

Chacma baboons play a role in aerating the soils and spreading seeds. They are a source of food for many animals and thus play an integral part in the local food web.

Chacma baboons are very interesting animals and they bring delight to people who visit them in zoos or see them in parks or in areas where they still roam freely. They are used for educational and medical research. These animals can be great pest to farmers and people who reside near their habitat. 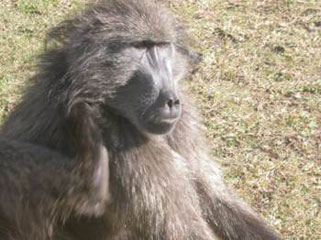 Chacma baboons are not listed as threatened or endangered. However, populations within the Cape Peninsula are considered to be potentially threatened and should be monitored and protected.