Pedioplanis: “ped” is the Latin prefix referring to foot, and “planus” is the Latin word for flat, so it is possible that the genus name refers to the flat feet of the sand lizards. “Lineoocellata” refers to the line of ocelli, or eye-like markings along the flanks on either side of the body, which are a distinctive feature of this species.

The spotted sand lizard is small but is often abundant and occurs over much of southern Africa. As common as this lizard is, very little is known about its life history or ecology. Most people have probably seen a spotted sand lizard, but most would not know its name or anything about it.

Description
The spotted sand lizard is orange to grey, about 50 mm long from the snout to the base of the tail, and looks much like most typical lacertids. This species can be distinguished from its relatives by the presence of a line of white-blue and dark bordered ocelli (eye-like markings) on its flanks in addition to more, paler, spots on its back which may be fused into a dorsolateral line. Sexes can be distinguished in adults by the presence of a hemi-penal bulge (a bulge on the base of the tail where the sex organs are stored in males). 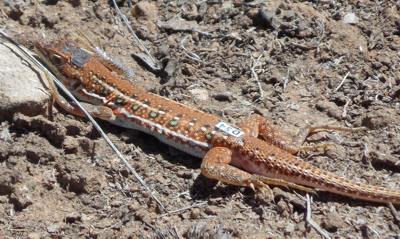 Getting around
The spotted sand lizard is a ground-dwelling lizard common in areas with open ground and plenty of rock fragments and its legs are most effective for compacted sands.

This species is predominantly a sit-and-wait predator and uses both chemo-sensory organs and vision for hunting and to avoid other predators. The spotted sand lizard has a lower endurance for exercise but greater capacity for bursts of speed compared to lizards that actively hunt their prey.

Adult males move distances of 30 m/day in un-degraded habitat, and home range sizes are about 200 m2 but they adjust daily movement according to food availability.

Communicating
Spotted sand lizards do not make any known vocalisations and instead communication is largely through visual displays.

Distribution
The species occurs in Namibia, Botswana and South Africa, where they occur in the North-West Province, Northern Cape, into the Great Namaqualand area, through the Little Namaqualand into the Western Cape and Karoo areas in the eastern-central parts of the country. There are seemingly isolated populations in Limpopo Province. There are few records of the spotted sand lizard from Botswana, possibly due to poor sampling and there are no known records from Zimbabwe or Mozambique.

Most of the available distribution records are from the west coast of South Africa, a predominantly winter rainfall zone covering Desert, Fynbos and Succulent Karoo biomes, but it does also occur in summer rainfall areas more inland as far as Botswana and Kimberley.  There are fewer records from the North-West Province and this might be because of the more grassy vegetation. 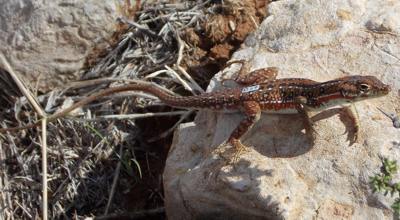 Habitat
The species is commonly associated with open ground and scattered rock fragments. It may use rocks as cover at night, possibly burrowing below rocks for safety. On a local scale different co-occuring lacertid species such as Pedioplanis namaquensis, Meroles knoxii and Nucras intertexta could be separated spatially by habitat preference- Pedioplanis lineoocellata would be more abundant in rocky, flat areas.

Food
The spotted sand lizard is more of a sit-and-wait predator than some of the other lizard species but it can an active hunter depending on what food is available. Not much is known about the diet aside from that the species is insectivorous. Observations of its hunting indicates that they feed on grasshoppers, flies, termites and most likely other small insects whenever an opportunity arises.

SEX and LIFE CYCLES
Sex
The main reproductive period is between December and February (summer months) and this ends between February and April.  Females may sometimes produce two clutches of eggs per season and around 7±2 eggs per female. Adult females bury their eggs in moist soil beneath a rock. Eggs may take 70-80 days to hatch. Sexual maturity is reached after about 18 months and adults can live for up to 5 years.

Family life
The species appears to be predominantly solitary and there are no records of any group activity or social living.

THE BIG PICTURE
Friends and Foes
Spotted sand lizards are likely eaten by many larger animals including snakes, scorpions, small mammals (mongoose, meerkats, cats, jackals etc) and smaller birds of prey such as shrikes and flycatchers. At the same time they are important predators for many invertebrates such as termites, flies, grasshoppers, roaches and most likely ants as well.

Smart Strategies
The predator avoidance strategy is to remain hidden but if they are seen they perform a little arm-wave ‘dance’ to let predators know that they are aware of the threat. When threatened further they may run very quickly and bolt between vegetation to confuse the predators.

Flexibility in its foraging behaviour and its diet allows this species to occupy very diverse habitats and a wide range of conditions- quite possibly one of the reasons for the large distribution of the spotted sand lizard. This flexibility could provide some safety in the face of environmental change. Current work also suggests that dispersal rates (i.e. movement between populations) may be very high thus allowing the species to move quickly to better suited environments.

The diverse range of colours and other aspects of their appearance suggests that this species has been able to adapt to new environments in a relatively short time which would be useful should their habitats change rapidly in the near future.

Poorer world without me
Not a lot is known about the value of this creature but because it is so common and occurs over such a wide distribution it is very likely important as a food source for other animals and as a predator for many insects. It thus helps keep the food web in balance and the loss of this species from an environment would affect many other species.

People & I
This species is not dangerous or poisonous and cannot harm anyone. It doesn’t seem to have any direct economic/commercial use and because lizards are often treated as a homogenous group in many cultures and societies there are no specific beliefs associated with the species compared to more charismatic creatures like chameleons or varanids.

Conservation status and what the future holds
The spotted sand lizard has not been evaluated for IUCN conservation status but is likely a Least Concern species because of its abundance and range. There has been no thorough investigation into conservation threats but habitat degradation, invasive plant species (such as alien grass) and rises in temperature are likely to be threats to this species.

RELATIVES
Pedioplanis is the most species-rich lacertid genus in southern Africa with 17 species, most of which are endemic to the region. Research using DNA has allowed scientists to estimate that splitting of the genus into species started about 10 million years ago, which is after the formation of the Namib Desert. The increased aridity of the Namib Desert might have been the cause for the rapid radiation of the genus. Species that diverged earlier have very wide distributions, whereas the more specialised species are more adapted to dry areas and have narrower ranges.

Previously Pedioplanis lineoocellata was divided into three sub-species on the basis of distribution and differences in the shape of the scales. Genetic work has identified that only the Waterberg population in Limpopo, formerly a member of Pedioplanis lineoocellata pulchella, is a separate species, and that there is no real genetic difference between the other subspecies.