The Harold Porter National Botanical Garden, serenely set between the mountains and the sea at Betty’s Bay, presents good opportunities for bird watching with 96 species recorded on its bird list. A visit to the area makes a much greater list than this possible, including the African Penguin, because many other habitats such as sandy and rocky sea shores, estuaries and lakes are found in close proximity to the Garden. 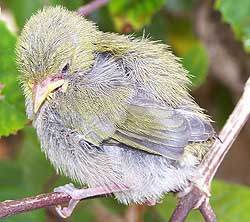 The fynbos-covered mountain slopes in the natural area of the Garden provide wonderful views over Betty’s Bay and the sea and you may be lucky enough to see a Verreaux’s Eagle or jackal buzzard soaring overhead, or closer to hand you may be fortunate enough to see the rare protea seedeater. This habitat is also home to the charming but untidy Cape Grassbird, the Cape Rock Thrush and the Ground Woodpecker.

Along the streams and dams enclosed by montane forests in the gorges, the bird watcher may catch a glimpse of the shy African black duck or the noisy Giant Kingfisher. Along the forest edges one will often see the dainty but unobtrusive African Dusky Flycatcher, quite often at close quarters. The sombre Greenbul is heard far more often than it is seen. In summer the striking dark-mantled, orange African Paradise-flycatcher builds its beautifully constructed, well-camouflaged nest in the branches. In the cultivated Garden one can almost always be rewarded with views of the brightly metallic-coloured male orange-breasted Sunbird (a fynbos endemic), or the Southern Double-collared Sunbird and their cryptically coloured mates, darting about the ericas and leucospermums. The male Cape Sugarbird can be seen flirting his long tail to chase off competitors and attract a mate, who is usually more interested in foraging amongst the proteas for nectar. The olive thrush may be seen busily scratching amongst the fallen leaves while the cocky Cape Robin-chat can be seen nearly everywhere, especially where weeding or planting has taken place. The delightful tiny Swee Waxbills with their bright red rumps move about the lawns in small flocks.

During summer, snakes, especially the large-eyed boomslang (tree snake), which, true to its name, spends most of its time in the trees, creates great anxiety and excitement among the breeding birds in the Garden. Many eggs and baby birds become food for these common reptiles. The noisy alarm calls of the Cape Bulbul, the Cape Robin-chat and various other birds alert the curious visitor, who may then see one of these snakes. The alarm calls may also signal the presence of raptors such as the Black-shouldered Kite or the African Goshawk being mobbed by a number of the smaller birds.

Also during summer several species of swallow and martin soar overhead. It is the best time for birding in the Garden, as a number of migrants such as the Paradise-flycatcher and the yellow-throated Woodland Warbler may be seen, but a visit at any time of year is sure to delight even the most casual twitcher.