Land purchases in the 1930s 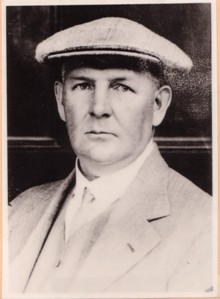 During the 1930’s land in the Hangklip area between the Palmiet River and the Rooiels River was acquired by three business partners, namely Harold Porter, Arthur Youldon and Jack Clarence. They called it the Hangklip Beach Estates and divided the area into three townships, namely Betty’s Bay (named after Youldon’s daughter, Betty), Pringle Bay and Rooiels and sold off plots to interested parties.

Until the Second World War when the coastal road (Clarence Drive) from Gordon’s Bay was built to service the radar stations at Stony Point and at Hangklip, the area was accessed via Sir Lowry’s Pass and Kleinmond and a pontoon crossing the Palmiet River.

After a fire in 1940 Harold Nixon Porter acquired an extensive tract of land in the Betty’s Bay area by a Trust Agreement to develop a garden and private nature reserve. He named it Shangri-la, meaning ‘paradise’. He turned the first sod on 2 October 1950 and it was officially opened as the Shangri-la Nature Reserve on 13 November 1955 by Professor Brian Rycroft, the Chief Executive Officer of the National Botanical Gardens.

After Harold Porter’s death on 27 February 1958 the Reserve was left to the Shangri-la Nature Reserve Company. Finding it too difficult to manage from Johannesburg, the corporate committee offered it to the then National Botanical Gardens of SA, which renamed it in Harold Porter’s honour and took on the financial responsibility for the Garden on 1 August 1959.

In 1962 the Hangklip Beach Estates added to the Garden property by giving it the adjoining area of Disa Kloof. Later still, the then Betty’s Bay Village Management Board, donated an additional adjoining piece of land which reaches to the sea. In total the land incorporated into the Harold Porter National Botanical Garden now comprises 200.5 ha, stretching from the top of the Kogelberg mountain range to the sea, encompassing a whole river system. Ten hectares have been cultivated as a garden while the remainder is managed as a natural reserve which is included in the core zone of the Kogelberg Biosphere Reserve, while the developed area forms part of its buffer zone.

When Harold Porter turned the first sod in the Garden, he was watched by just his overseer, Mr Veldsman, and an unnamed labourer. He marked out various pathways in the Garden, augmenting the naturally occurring plants with additional special or colourful plants from elsewhere. He also marked out and built the Zigzag path which leads to the top of Bobbejaanskop and is still in use today.

Some of the first labourers who worked the Garden were convicts who helped clear brush and built some of the retaining walls and weirs in Disa Kloof. 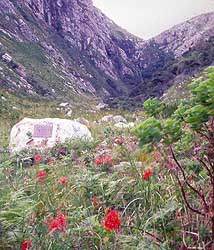 Harold Porter died at the age of 75 on 27 February 1958 and his ashes were scattered in a favourite spot of his where Nerine sarniensis bloom every March or April. A plaque of granite was sunk into a large sandstone boulder to mark the spot.

For a time his wife Olive May, and son Arthur, continued to support the Garden and were instrumental in shaping some of the features which can still be seen in the Garden. One of these is the entrance building, designed by Arthur, and built from the stones of their home, Afterglow, which was burned down in a terrible fire in 1960. The pole at one corner of this building was fetched with considerable effort from the beach where it had washed up after a massive storm. This building was opened on the 23rd Sept 1963.

A bridge connecting the main Garden to Disa Kloof across the Dawidskraal River is named after Olive May Porter and was opened by her on 14 February 1967. Another feature in the Garden which owes its existence to Olive May is the Dunes section of the Ecosystems Walk. She died in 1984 at the grand old age of 98 and her ashes were scattered near her husband’s memorial stone.

The original paths through the Garden, as laid out by Harold Porter, were simply slashed through the existing vegetation. Each curator over the years has added to the features and infrastructure of the Garden. Ponds were built and streams cleared, all the gravel was removed and now lawn or exposed aggregate paths lead the visitor from one section to another.

Over the years new offices, a workshop, storerooms, staff quarters, an Eco-Centre (now demolished) and a new restaurant and conference centre have been built. In 2008 attractive landscaping, including a pond and stream, new lawns and flower beds were added to the front of the Conference Centre.

The new centre comprises a restaurant and a fully equipped conference centre. Much of it is clad with local sandstone blocks to blend in with the environment and the style of the original entrance building. A larger, paved parking area was also laid out. These new facilities were all part of a Public Expanded Works Programme, an initiative to provide wages and simultaneously train previously disadvantaged individuals, funded by the Department of Environmental Affairs and Tourism.

A new pedestrian bridge was completed in August 2008, re-establishing the wheelchair-friendly path leading to Disa Kloof that was destroyed in one of the landslides during the 2005 storm. A boardwalk which also acts as a viewing platform was completed in 2009 at the Disa Kloof waterfall.

Fires have occasionally swept through the Garden but have fortunately never damaged any of the buildings in the Garden itself. Garden beds have however been decimated from time to time and much work has been needed to clean up and start again with new plantings in the cultivated areas. However, as the natural estate comprises of fynbos, the fires, if they occur at appropriate intervals, are a necessary part of the natural cycle of this vegetation type.

In April 2005, an extremely bad storm resulted in severe flooding which caused extensive damage to the Garden.  A similar flood took place on 16 November 2013, again causing a great amount of damage which will take a while to fix. The last major fire to sweep through the estate was in June 2010. A small fire occurred on 4 November 2013 which burned about 200 m² on the eastern boundary of the Garden. It was caused by a young baboon that climbed the electricity pylon, causing an electrical short circuit with the subsequent shower of sparks setting the veld alight. Unfortunately the young baboon was electrocuted and died immediately.

As always with disasters such as fires and this flood, many of the local Betty’s Bay residents have come to the aid of the Garden, helping to put out fires and to clear up the damage afterwards.

Curators over the Years

Over the years each curator has contributed to fulfilling the mandate of the Garden, which is to grow and display the local indigenous fynbos flora for scientific, horticultural, educational and recreational purposes.

Harold Nixon Porter assisted by the following foremen in turn – Mr Veldsman, Mr Ryk Grunewald and then Mr Harry F Wood, (1957 – 1959) who stayed until the first NBG curator was appointed in 1960.

No curator for 8 months but Mr Bernard Vogts kept an eye on the Garden.

No curator for 10 months. Mr B Vogts and Mr Jack A Marais (Kirstenbosch curator) watched over Garden operations.

No curator for 8 months. Garden run by the foreman Mr Leslie Harper, and 6 labourers and checked fortnightly by the Kirstenbosch curator.

Mr Johannes P (Hans) Heilgendorff. A full-time horticulturist was appointed to assist the curator in August 1991. Before this time the curator had to fulfil the managerial, horticultural, administrative and educational roles singlehandedly.

No curator for 3 months. Miss J Forrester managed the Garden during this period.

Mr Rudi M Britz. A typist, Mrs Marie Britz, was employed 1 day per week during the latter part of this period.

Ms Catharina (Karin) M Behr. Staff complement at this stage was 11. As from 1 June 1995 a 5/8 post was approved for a typist/admin assistant. In March 1996 this post was upgraded to a full time post in order to assist the curator with administrative duties. A second horticulturist post was also approved.  Additional Groundsman I and II posts were approved and the staff complement increased to 18.

Mr Werner Voigt. In 2008 a full-time Education officer was appointed which has enabled the Garden to fulfil its educational function to a greater extent. The staff complement increased to 26 and was boosted by students from time to time.