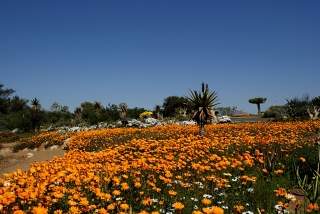 Spring is announced by the flowering of annual Namaqualand daisies (dimorphothecas) that creates ‘rivers’ of orange in the landscape.

Later in spring gazanias, ursinias, pelargoniums and vygies (mesembs) burst into a colourful display of lustrous pinks, magentas, reds, yellows, whites and oranges. Flowering depends on the amount of rain the area receives.

Ground orchids, such as Satyrium erectum with its pink flower spikes, flower in the natural areas of the Garden. 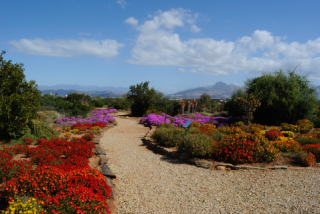 Later in spring, mesembs, or vygies, start flowering. These cheerful, sun-loving plants come in various colours, except black, blue or brown. A wide variety of vygies are displayed throughout the Garden.

The temperature is still cool at this time of the year. The maximum temperature is about 28°C and early morning temperatures are around 6°C. Snowfall on the surrounding mountains is possible as late as October. 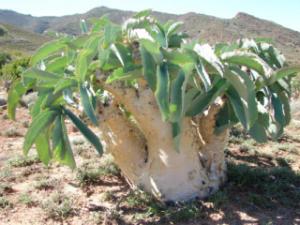 During this hot, dry period of the year (December to February) most of the geophytes (bulbs) and succulents are in resting. Some unusual and interesting plants worth seeing in summer include the architectural caudiciform plants. These plants have swollen stems or exposed rootstocks. Examples include Cyphostemma juttae (Namibian grape), Tylecodon paniculatus (botterboom/ butter tree), Adeniums (impala lilies or sabie stars), Othonnas and Senecios.

The Namibian grape, Cyphostemma juttae, growing in the Namibian Garden and the spring annuals beds, has inconspicuous flowers, but in late summer it produces a bunch of red grape-like berries.

Summers are traditionally hot and dry – typically Mediterranean. Summer temperatures can reach 44°C. The cool south-westerly winds give some relief on hot days. The area receives very little or no rain in summer. Rain in summer comes in the form of thunderstorms. Only one or two thunderstorms are experienced each year.

Please be sure to wear a hat and use sun screen. Also, drink plenty of fluids when walking the trails. 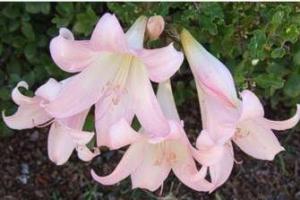 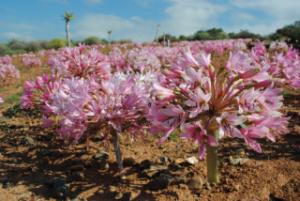 Cultivated in the Garden or occurring naturally, the amaryllid bulbs respond quickly to autumn rains. The two bulb beds near the Garden office and the amaryllids in the Knersvlakte section are a must see in autumn.

The quiver tree, Aloidendron dichotomum, with its striking yellow flowers, is one of the first aloes to flower in the Garden. Conophytum spp. are the first mesembs (ice plants) to flower, followed by Cephalophyllum spp.

The heat of summer is gone and autumn temperatures are a comfortable 25-29°C. These are champagne days, when the air is crisp and one can feel winter approaching. Early rain showers can be expected during May. 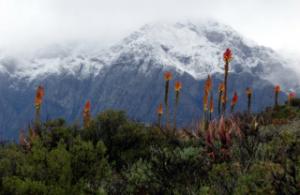 Winter (June to August) is the time of the year when most aloes are in flower. Aloe microstigma, the only aloe that occurs naturally in the Robertson Karoo, brightens the cold winter days with its orange-yellow flowers. Gazania krebsiana with its brightly hued flowers, the shrubby mesembs and annuals start to show their first colour.

Aloe marlothii, Aloe vanbalenii and Aloe petricola are some of the aloes that are cultivated and displayed in the Garden.

Winters are usually accompanied by generally strong north-westerly winds and erratic rain. The days are short, with mid-winter sunrise at 07h30 and sunset at 17h30. A typical winter’s day starts with a low of 2°C at sunrise, rising to 15°C to 17°C during the day. Temperatures can fall as low as -2°C in July and August. However, the occasional berg wind (hot mountain wind) can raise temperatures to 30°C!

In most years the 2 000 m Brandwacht Mountain, behind the Garden, is covered in snow. This mountain forms part of the Hex River Mountain system. Substantial amounts of snow may lie unmelted for as long as 3 weeks. Sometimes the mountains surrounding the Garden are entirely covered in snow – a touch of Switzerland in the Western Cape!