The garden was established in 1921 on 20 morgen (17-21 hectares) of land near a railway siding at White Hill, 5 km east of Matjiesfontein. The garden was known as Logan Memorial Garden and was the second National Botanical Garden (NBG) to be established after Kirstenbosch. Mr. J. Archer, former station master at Matjiesfontein and lover of succulents, was appointed as the first curator in 1925.

Because of a lack of water and the re-routing of the national road, it became evident that Whitehill was not a suitable site for the garden anymore. 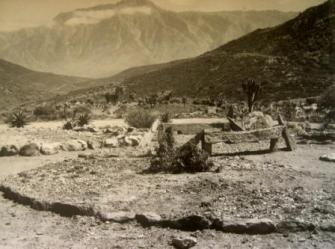 In 1944 Prof. R.H. Compton, Director at Kirstenbosch, and Mr. J. Thudichum, a Swiss horticulturist based at Kirstenbosch, began to search for a more suitable site. Two possible sites were identified. One was near Robertson and the other near Worcester. Thirty-six morgen of land, just north of Worcester, was donated by the Worcester Municipality and Mr. C.P. Heatlie, for the re-establishment of the garden. The garden was established on 15 August 1945.

Additional land was donated by the Worcester Municipality and Mr. Heatlie, increasing the total area of the Garden to its current 154 hectares. When the garden moved to Worcester it was known as the Karoo National Botanical Garden (Karoo tuin in Afrikaans).

Mr. Thudichum was appointed in 1945 as the first curator at the new location. He was responsible for the relocation of plants from White Hill to Worcester. Many of these plants, especially the Quiver trees, Aloe dichotoma, that were replanted in Worcester, still survive in the original location (to the east of the lower parking area). Mr. Thudichum watered the plants using a bucket, balanced on handlebars of his bicycle or by wearing a yoke to support the buckets. Mr. Thudichum is remembered in the botanical world for a showy yellow or orange mesembryanthemum, Drosanthemum thudichumii, which grows naturally on the shale hills of this garden. 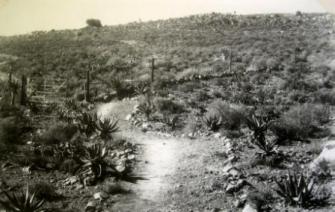 In 2001, 80 years after the garden was established, the name of the garden officially changed to Karoo Desert National Botanical Garden. With the addition of the word ‘desert’ to the name, it emphasises that this garden cultivates and displays plants from the desert and semi desert regions of southern Africa.

The interesting history of where the garden started can be read in the article, From Whitehill to Worcester, which appeared in the Veld & Flora magazine in March 2006.