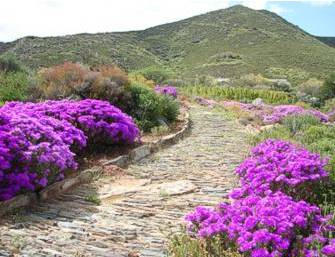 The Karoo is often perceived as a barren landscape, but this unique trail (approximately 1 km long) reveals various interesting parts of the Karoo that you never knew existed.

Interesting features in this section are: 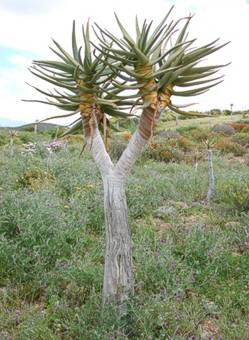 The main attraction of the Bushmanland area is the man-made quiver tree forest planted with a number of quiver trees in 1999. These quiver trees were rescued from a farm in the Klein Pella district of the Northern Cape. Their natural area was being destroyed by bulldozers to make way for a new road. The previous farm owner took the initiative to rescue some of them by digging them out and replanting them behind an old dam near the farm house.

Since many trees have died over the years, we are replanting the area with young quiver trees on an annual basis to slowly build up the man-made forest. Come watch how the area is being populated every year.

Bushmanland is an area situated in the upper Northern Cape Province that borders on Namibia. It is a semi-arid region with most of the rain falling during the summer months. Summers are generally hot and maximum temperatures of 45°C are not uncommon. Winters are cold with light frost experienced in most places. There are, however, a few areas of Bushmanland where most of the precipitation falls within the winter months, e.g. Loeriesfontein.

Visit our plant information website to read more about plants in our garden. 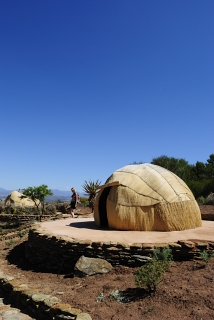 The heritage garden displays plants used by the Khoisan for food, water, hunting and medicinal purposes. A large emphasis is placed on the Khoisan culture, customs and how they lived. On the right side of the image is the traditional house of the Namas called matjieshuis ‘mat house’ and kookskerm‘cooking shelter’ is in the background. 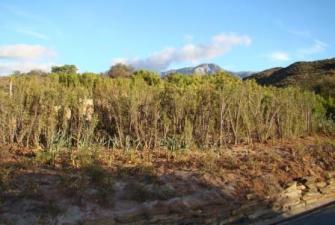 Spekboom, Portulacaria afra, is known for its ability to absorb excess carbon from the atmosphere. They are ideal plants to help slow down the process of global warming.

The spekboom leaves are slightly acidic and are edible for humans and animals. Indigenous Mozambican women eat the leaves when they are short of milk during nursing as they are believed to increase the milk supply of lactating women.

Spekboom occurs naturally in the Little Karoo (near Ladismith), Eastern Cape and towards Mozambique. Other plants from the Eastern Cape such as the common soap aloe (Aloe maculata) and the bitter noors (Euphorbia ledienii) have also been planted in this section. 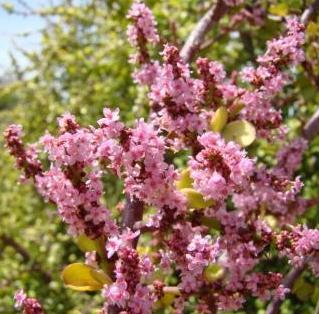 Spekboom grows easily from stem cuttings, makes an excellent hedge and is very fire resistant. It is thus an ideal plant to cultivate near homes that are surrounded by natural bush.Read more about Portulacaria afra on plantzafrica.com 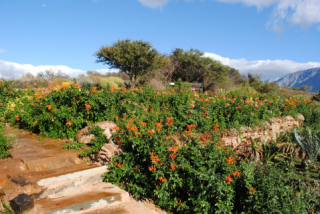 The maze, which was completed in 2010, contains colourful Cape honeysuckle (Tecoma capensis), in pink, orange, red and yellow varieties. These contrast beautifully with the blue and white colour forms of Plumbago auriculata. Both of these plants create excellent hedges. They respond well to pruning, are fast growing and, with their colourful flowers, attract many birds and butterflies to a garden. 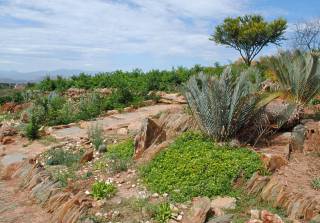 The new layout surrounding the maze focuses on plants from the Eastern Cape such as euphorbias, pelargoniums and the Karoo cycad, Encephalartos lehmannii.

The spekboom from the old maze was moved to form a larger spekboom forest. 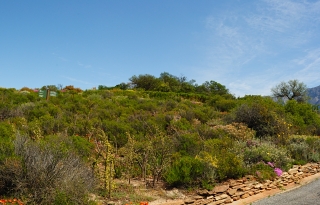 This area was previously the Great Karoo Section. An Albany Thicket has now been planned for the space. Spekboom, Portulacaria afra, have already been planted to start the process of creating the thicket. 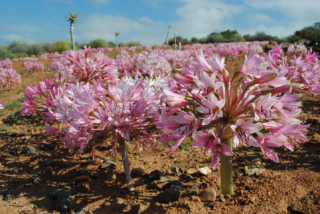 Amaryllids, in the form of Brunsvigia bosmaniae and the vulnerable Haemanthus lanceifolius, have been planted as a result of plant rescues. It is estimated that there are at least 5 000 bulb plants in this area. Every year more and more of these amaryllids start to flower, becoming a bigger attraction each year.

The best time to visit this section at the Karoo Desert NBG is when the amaryllids are in flower from end of March – May. Afterwards they produce two, usually large, leaves that die back at the first sign of summer. 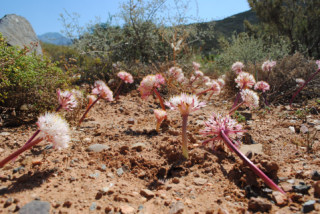 The Knersvlakte is situated in the Western Cape Province between Bitterfontein in the north and Vanrhynsdorp in the south. Fields of white quartz pebbles cover the gentle rolling hills. Between these pebbles one discovers the highest diversity of succulent plants in the world.

The vegetation of the Knersvlakte is characterised by stone plants and other dwarf succulents. Succulents from the Knersvlakte are threatened by small scale mining, overgrazing and the illegal harvesting of rare and localised endemic plants species. 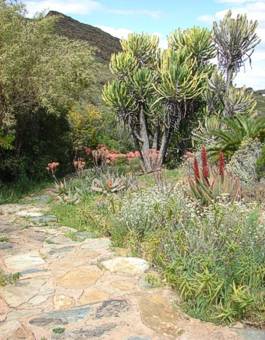 The Eastern Cape is floristically very rich. The displays at the Karoo Desert NBG centre mainly on the succulent-rich floral diversity of the region.Euphorbias of all shapes and sizes are found in this section – from the large Euphorbia triangularis (river euphorbia) to E. caerulescens and the smaller E. clava. Euphorbias have a poisonous milky latex which may cause temporary blindness if it comes into contact with your eyes. Euphorbias have little or no leaves, with only their green stems for photosynthesis. This ability to photosynthesise without leaves helps the plant to conserve water. 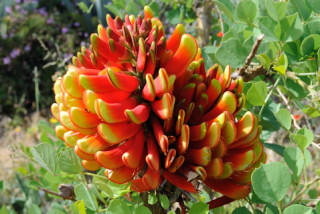 There are also non-succulent plants in this section, such as the yellow form of the Strelitzia reginae‘Mandela’s Gold’, the vulnerable Strelitzia juncea, Erythrina acanthocarpa (the tambookie thorn) and some Eastern Cape cycads.