This section contains the Karoo, gousblom and bulb beds.

The miniature rockery, just in front of the main administrative office, represents four of the main semi-arid areas in the Karoo namely the Little Karoo, Great Karoo, Ceres Tanqua Karoo and the Worcester Robertson Karoo.

The gousblom, Gazania krebsiana, gives a spectacular display in late spring with its warm bright flowers, while the bulbs are in full flower in autumn. 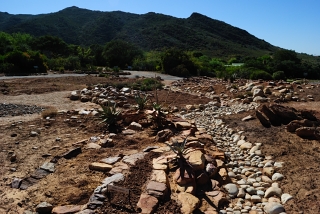 We are currently revamping this area which used to feature plants from various geographical areas of southern Africa. The new area will focus on our four major collection regions including the Little Karoo, Great Karoo, Ceres Tanqua Karoo and the Worcester Robertson Karoo.

The Namibian bed is the only bed that will remain the same, as the welwitschia has a long taproot and cannot be transplanted.

The plant beds have been cleared and soil and rock from the regions have been brought in. The horticulturalists are hard at work collecting and cultivating new plant material. 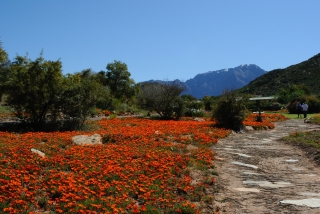 The gousblom (Gazania krebsiana) is one of the best known spring flowering plants. It is an extremely showy plant when in flower, creating colourful beds of brilliant orange or red. It starts to flower in late August and continues until January, peaking from October to November.

Gousblomme means ‘golden flowers’ in English – although the gazania in the Karoo Desert National Botanical Garden are bright orange or red. There are several beds displaying these gazanias.

Insect pollinators are only active from mid-morning to early afternoon, as they are cold blooded. Some beetles overnight in the flower. As soon as the flower opens the beetle will take off to the next flower, in search of pollen.

The dark marking at the base of the petals has a striking resemblance to monkey beetles. This might serve to attract passing males in search of females.

Gousblomme are very easily cultivated from seed. In the southern hemisphere, sow the seeds in March in a light, loamy soil about 5 mm deep. Keep moist and they will grow rapidly – transplant in May. They will flower in September of the same year! 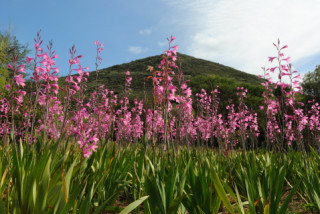 The best time to visit this bulb bed is from March till May and October. From March onwards the autumn flowering bulbs are in full flower. The spectacular flowers of Brunsvigia, Amaryllis and Haemanthusspecies transform this otherwise barren landscape into a brilliant field of pink and orange. In late spring it’s the bright pink and purple flowers of the watsonias that give colour to this section.

The orange-red flowering paintbrush, Haemanthus coccineus, the March lily, Amaryllis belladonna, the kandelaar, Brunsvigia josephinae, and the gifbol (poison bulb), Boophone disticha, are displayed in this bed. More amaryllids are displayed in the bulb bed on the other side of the karoo beds.