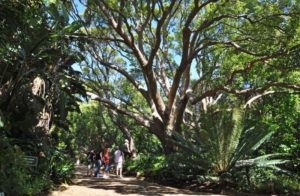 The trees of the Camphor Avenue are a remnant of the avenue of trees planted by Cecil John Rhodes in 1898 along what is now Rhodes Drive. It is said that he planted the trees to represent the outposts of the British Empire to honour Queen Victoria, hoping that she would visit the Cape. The more prosaic version tells that he planted them for shade and privacy while riding along his favourite path.

The section of Rhodes Drive that runs through Kirstenbosch includes camphor trees (Cinnamomum camphora) from China, Moreton Bay figs (Ficus macrophylla) from Australia and stone pines (Pinus pinea) from southern Europe. If you were to continue along Rhodes Drive in the direction of Hout Bay, you would find Spanish chestnuts (Castanea sativa) and cork oaks (Quercus suber).

Queen Victoria never saw the avenue, nevertheless we have inherited beautiful trees forming a magnificent avenue, where a variety of shade-loving bulbs, cycads, ferns and herbaceous plants thrive under the spreading canopy. You will see yellow and orange Clivia miniata in the spring, dainty Streptocarpus in the summer, and in autumn the avenue is painted blue, purple and white by Plectranthus. You will also see magnificent specimens of the shade-loving Encephalartos paucidentatus (Barberton Cycad).

History of the Camphor Avenue

The path along which Rhodes planted his avenue was the old wagon road, probably in use since the late 1600s for dragging timber from the forests. In 1913 the section of Rhodes Avenue that passed through Kirstenbosch was a rutted, almost impassable track.  It was upgraded to take vehicular traffic in 1914-15 and the road beyond the Garden, from Rycroft Gate to Constantia Nek, was open to traffic in 1923.

In 1913, the provincial authorities planned to get around the very steep section up Kirstenbosch Hill (now Camphor Avenue) by deviating the road  to the west, which would have taken it right through the Garden. Fortunately the first Director, Harold Pearson managed to convince them to deviate the road to the east instead. Thus in 1916 Camphor Avenue was closed to traffic and the newly built deviation road to the east, from the bottom of Camphor Avenue and through what is now the Nursery, was opened.  In the 1950s the third director, Brian Rycroft, successully negotiated with the City of Cape Town to deviate the entire section of the public road that ran through Kirstenbosch to the garden’s eastern boundary. This second deviation was open to traffic in June 1964. In the 1970s Rycroft had to fight the City again to prevent Rhodes Drive from being converted into a 6-lane freeway – this 5-year campaign is remembered  as the ‘battle of the road’. Read more about the early days of Kirstenbosch on the History page.