Clivia Dam/ wetland gets its water supply from the Dorpspruit River and forms part of our inter-connected wetland area. This dam opens up to the Dorpspruit River again and flows downstream towards Kingfisher Lake. The open water of this wetland has been naturalised by the introduction of the blue and pink forms of the striking indigenous water lily, Nymphaea nouchali and Cyperus papyrus – known as the plant that produced the first paper on earth. 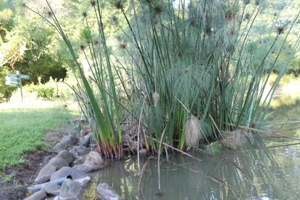 Cyperus papyrus is among a number of plants that have been planted on the banks of the wetland to stabilise it and to prevent soil erosion. Indigenous wetland species such as Gunnera perpensa, Crinum graminicola, and Bowkeria citrina have also been planted in this wetland. A pair of Egyptian Geese in this area regularly produces a clutch of goslings which children love to feed with bread scraps. The dam, which used to be the main water supply for the irrigation of garden beds, is very important as it attracts many bird species. 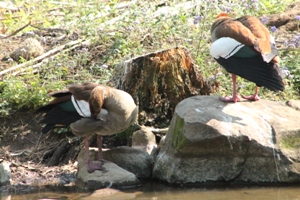 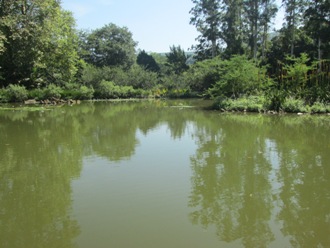 The centre is planted with fever trees. Fever trees are found in low-lying swampy areas of South Africa. This tree (Acacia xanthophloea) is popular with birds for nest building as the thorns add extra protection against predators such as snakes. Elsewhere, young branches and leaves are eaten by elephants. Insects, such as bees, are attracted by the yellow colour and sweet scent of the flowers and play a pollination
role.

Visit in spring and summer to see Village Weavers during breeding season making beautiful nests that look like hanging fruit on these trees. 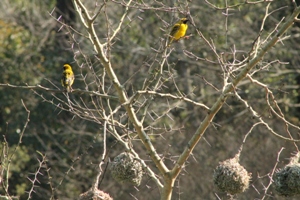 A Cormorant diving into the water to catch fish is a sight not to be missed during autumn through winter. Take a moment to witness this predatory bird working its magic and make sure you take pictures. 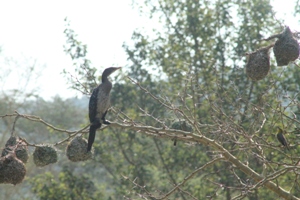 Here visitors can also spot dragonflies and damselflies and take a closer look to learn differences between the two. Damselflies are typically smaller than dragonflies. However, there are other distinctions that set them apart, including that most damselflies hold their wings at rest together above the torso or slightly open above whereas most dragonflies at rest hold their wings perpendicular to their body, horizontally or occasionally slightly down and forward. Also, the back wing of the dragonfly broadens near the base, caudal to the connecting point at the body, while the back wing of the damselfly is similar to the front wing. The eyes on a damselfly are set apart; in most dragonflies the eyes touch.