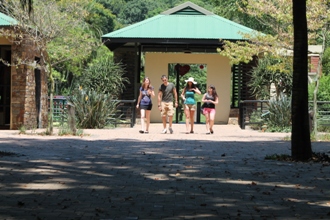 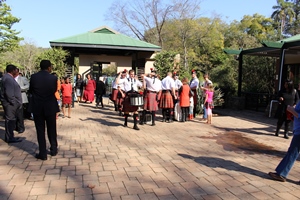 The visitors’ complex frames the entrance to Plane Tree Avenue and is reached from the parking area via a bridge across Magazine Spruit.

The ticket office opens onto a large paved area which provides a rendezvous site for visitors. The restaurant, complete with a large open fireplace and air conditioning, has scenic views across the Garden lawns and the Grand Old Trees section of the garden. An information centre, Kiosk, children’s playground and toilet block are also situated in the complex. 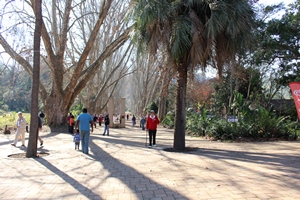 In this part of the Garden visitors are likely to spot, as illustrated in this section of the Garden map, the eyed pansy butterfly (Junonia orithya madagascariensis), the Cape clawless otter (Aonyx capensis), bush lily (Clivia miniata), Natal plum (Carissa macrocarpa) and tree aloe (Aloe barberae). 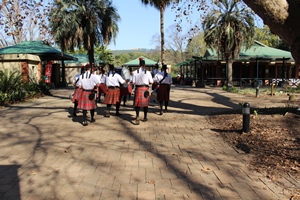 The eyed pansy is a widespread but uncommon butterfly, and its visibility peaks between August and November, and February and March. The larvae feed on Plectranthusand Thunbergia species.

The Cape clawless otter occurring here is the largest of the  two otters occurring in the sub-region. It is usually active in the early morning and late afternoon and rests during the warm part of the day. Freshwater crabs are their main food, but fish and frogs are also part of their diet. This species hunts by sight but much of its prey is found by feeling around with its claws and it can, therefore, hunt in water with poor visibility.