September, October and November in South Africa are spring months and the weather is warm and pleasant. In the lowveld the mean daily temperatures during this period is 11ºC (nights) and 26ºC (days) and the monthly rainfall is 22 mm on average. 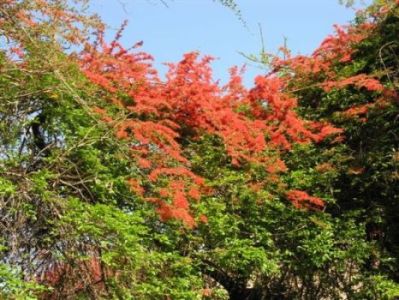 The first rains of spring clean and clear the air. Signs of renewal are found everywhere in the Garden. Fascinating plants start pushing their way through the soil. The blossoming of the wild pear, Dombeya rotundifolia, heralds the advent of the new season as the tree’s siSwati name, uMbikanyaka, implies.

This Garden is notable for its wonderful, massed displays of Clivia miniata which never fail to delight visitors. The startling scarlet of the flame creeper, Combretum microphyllum, next to the guest cottage, is a sure invitation to photographers to record the display. 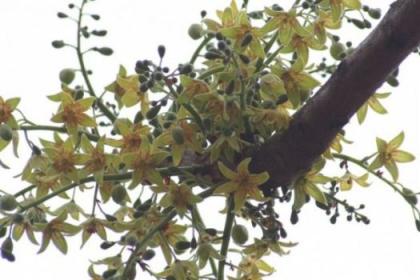 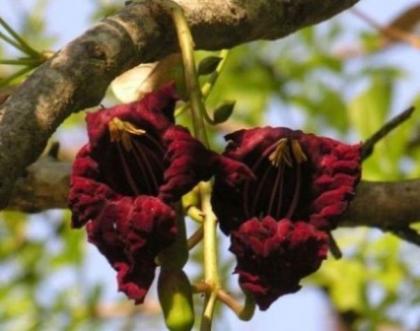 The well-known sausage tree, Kigelia africana, a member of the Bignonia family, has large, wine-red, trumpet-shaped flowers that are full of nectar and attract birds and bees from dawn to dusk. The sausage-shaped fruits are not of the delicatessen variety and are eaten by animals with teeth strong enough to crush this rather hard “sausage”! While still green, the fruit is sliced and applied to skin abrasions and reputedly also to skin cancers. 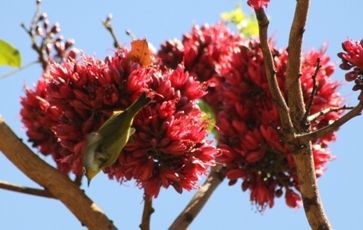 Schotia brachypetala (weeping boerbean) is a large tree that produces a riot of dark red flowers in spring. It is heavily laden with nectar which actually drips down from the tree. It attracts every kind of sunbird imaginable and other birds and animals looking for a sweet treat. 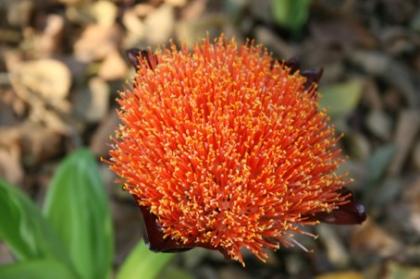 Scadoxus puniceus (paintbrush) is a bulbous plant that produces paintbrush-like flowers, on stalks about 50 cm off the ground. It usually grows in very shady areas and produces glossy, dark green strap-like leaves. Equally impressive red berries that attract birds follow the flowers. The flowers attract pollinators such as honeybees. Although the bulb is said to be poisonous it is used by some traditional healers to treat ailments such as headaches, coughs and stomach problems. 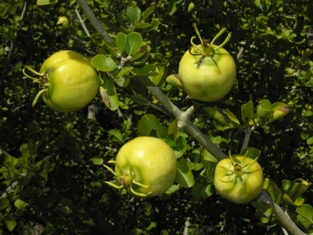 Gardenia cornuta (Natal gardenia), is a dense shrub producing large, beautifully scented white flowers, followed by equally attractive light to dark yellow fruit. Monkeys are known to eat the young fruit and people have been known to eat the fruit in times of food scarcity. The leaves are browsed by game.

In Nelspruit, summer lasts for more than the country’s average three months, starting in October and lasting till March. Summers can be very hot, with temperatures soaring to 35°C, occasionally even higher, with high humidity. The evenings are warm and sultry, with highs of about 20°C. The rain usually falls in the form of late afternoon and evening thunderstorms. The average precipitation is about 780 mm per annum.

During this period the Garden is a welcome haven for walkers, birders, picnickers and tourists. Its lushness and the refreshing sound of the cascading Crocodile River lures the visitor.

This is the rainy season, and in years with heavy rains the Crocodile River can become a raging, roaring monster, sending up a mighty plume of spray which can be seen from the White River Road.

The perfumed vlei orchid, Eulophia angolensis, grows in the marshy section near the bridge over the river. This species may be seen in other vlei areas in the district and is still relatively plentiful. The twin-spurred Satyrium hallackii is another vlei orchid. Dissotis canescens, akin to the tibouchina of horticulture, begins to flower in late summer.

The clear yellow blooms of Ochna natalitia are followed by intriguing, colourful fruits. The ochna fruits are green, ripening to black and resembling Mickey Mouse’s ears. 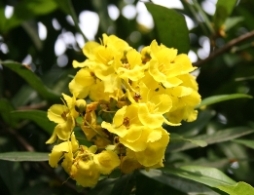 Acridocarpus natalitius(moth-fruit) is a spectacle to look for in the Garden. The Zulu people believe that chewing the roots can prevent anger when a mistake has been made and the leaves under the tongue of an opponent will leave him tongue-tied. This evergreen shrub-to-small tree produces a profusion of beautiful dark yellow flowers. The flowers attract numerous insects, which in turn attract insect-eating birds to the Garden. The winged fruit is what lends this plant the common name of moth-fruit as the fruit look very much like moths. 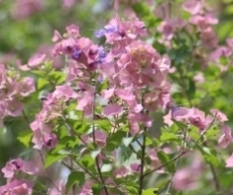 Karomia speciosa (southern Chinese hats) produces the most interesting profusion of paper-like flowers in a pink and purple colour combination. It is a great addition to a summer garden in cooler temperate areas, as it is deciduous and loses its leaves during winter. 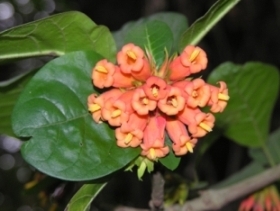 Wild pomegranate, Burchellia bubalina, bears brilliant orange flowers and has evergreen foliage. Flowers are laden with nectar for the sunbirds.

In autumn, between April and May, the heavy heat of summer has abated and the weather is mild, with a welcome hint of coolness in the evenings. The mean daily temperature during this period ranges between 12ºC (nights) – 25ºC (days) and monthly rainfall is 38 mm on average. 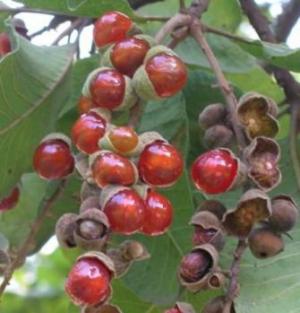 One of the highlights of this season is the autumn foliage of Bridelia micrantha, mitzeeri or brown stinkwood. The toad tree, Tabernaemontana elegans, has delightful, twin-lobed fruits with warty skins, almost like those of toads (Oleander family, Apocynaceae).

Pappea capensis, the jacket plum, bears most attractive fruits that are usually a pale shade of amber. In some years, for reasons as yet undetermined, they are brilliant red. The flesh around the kernel has a fresh, tart flavour, like that of lemons.

The Lowveld Garden boasts a good variety of barlerias which flower in autumn. 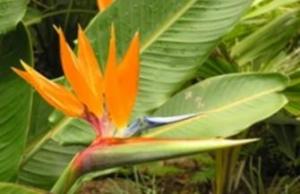 Strelitzia reginae (crane flower) is a well-known shrub and is sought after by florists and decorators. The long spear-shaped leaves, along with the orange and blue flowers, which look very similar to the head of a bird, make this a great addition to an indigenous garden. The flowers attract nectar-eating birds that pollinate the flowers in exchange for a sweet drink of nectar. Bees and other insects also visit these flowers. 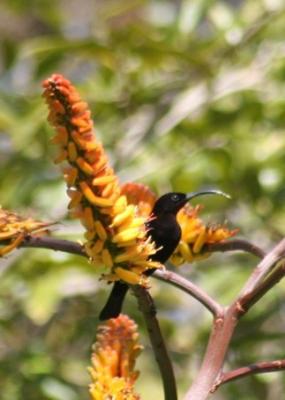 In winter the temperature in the Garden rarely plummets to near-zero. Night lows are generally between 6 and 9°C, with a daytime average in the low twenties. Winters are usually dry, but rainfall can sometimes be experienced in June or July (60 – 70 mm). The weather is perfect for outdoor living with lovely sunny days. Because of the brief and extremely mild winter, this is the most popular season for tourists.

The landscape is never completely brown or bare and the rivers are quiet, clear and tranquil, bubbling quietly over the rock-strewn river beds. In winter, the Garden appears more open and you can see the shapes of bare trees and recognise them by their bark and branching patterns. 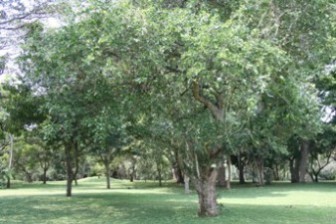 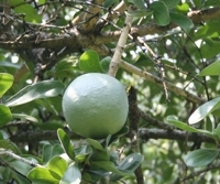 The enormous, decorative fruits of the black monkey orange, Strychnos madagascariensis, are more blue than black. The fruit has a thick, woody shell and contains large seeds covered with bright orange flesh that is relished by both man and beast. Baboons are adept at breaking open the shells. 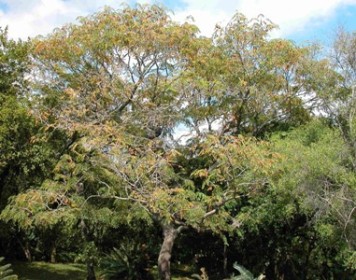 The distinctive bark and zig-zag branches of Pterocarpus angolensis, Transvaal teak, are more evident in winter and make the tree easy to identify, even from a distance. The timber from this tree is extremely popular for the manufacturing of furniture, bowls and ornaments. It is a slow growing tree so regeneration does not keep pace with or compensate for utilisation of the wood.

This is the time of year to appreciate the trunk of the lavender tree, Heteropyxis natalensis.

When the aloes start blooming the Garden is dotted with beautiful warm colours ranging from oranges and yellows to reds. 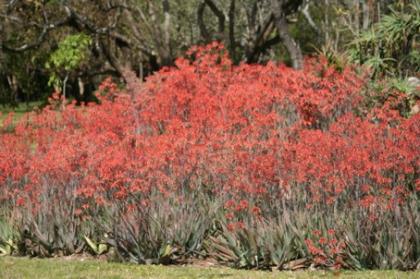 These winter-blooming succulents are a welcome source of high-energy food for both birds and insects and baboons often enter the Garden to make use of them as food, a source of moisture and, unbeknownst to them, a winter tonic. 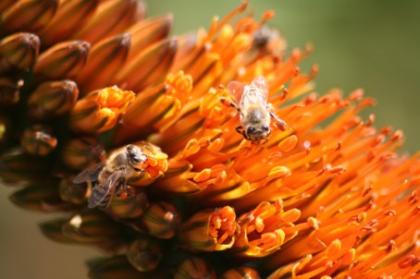 “Drab” is definitely not the way to describe the Lowveld National Botanical Garden in winter. It is well worth a visit at this time of the year.