The rainbow skink is one of many reptiles that can be found living in the Garden. Other reptiles include flat lizards, monitor lizards (leguaans), tortoises and various species of snakes.

The rainbow skink is a large, beautifully coloured skink with varied colouration, depending on sex and age. Juveniles and sub-adult males are dark olive-brown to black above, with three distinctive bluish-white stripes that are a brilliant electric-blue on the tail. Adult females retain their colouring, although the stripes may become subdivided and faint. 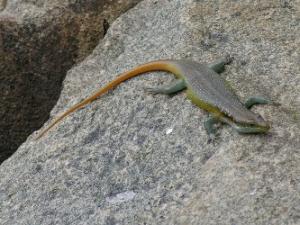 Adult males become buffy-olive to olive-brown above, each scale bearing a pearly white spot. The pale stripes become indistinct. The tail changes from yellowish to orange brown and the belly is creamy white.

The rainbow skink is a rock dweller and can often be seen running around on exposed granite domes and other rock faces, feeding on insects.