Dwarf mongoose is the smallest of the mongoose family Herpestidae and is highly social living in cohesive groups of three to 30 individuals that collectively engage in cooperative breeding, territory defense, sentry duties to look out for predators, babysitting and grooming. Within each group there is rigid hierarchy with a single breeding pair which is dominant and which suppresses reproduction of all other group members. Dwarf mongooses are active during the day in relatively open habitats were they mainly feed on insects but are also known to prey on snakes, lizards and small mammals.

How to recognise a Dwarf Mongoose
Dwarf mongooses have a long slender body and a furry tail that is almost equal to body length. The species can be differentiated from other mongooses by  body size, being much smaller than most other species (18 to 30 cm, 210 to 350 grams). They are dark brown to black; with hair on the dorsal surface more sparse than on the under belly. The head is large and pointed, ears are small and lie close to the head, the muzzle is pointed and they have short limbs. The front feet have long curved claws that are used for digging when foraging for food. Both sexes have cheek and anal glands that are used to mark territory and group members. Both sexes are alike in size and appearance.

Getting around
Mongooses are mostly terrestrial, moving on all four limbs. They can walk, run and occasionally climb. They have not been seen to swim, but the possibility is not ruled out. Dwarf mongooses have good eyesight and are active during the day. They emerge from their shelters after sunrise and return before sunset.

Communicating
They are very vocal, communicating with each other continuously with a wide range of twitters and whistles as they scuttle about looking for food. Vocal communication is very important to coordinate the movement of the group as they forage over a large area, especially as their line of sight to each other is often obscured. 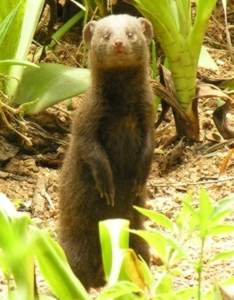 They have specific calls for certain behavior. There are calls indicating excitement when for instance they come across a new food source, a panic sound which indicates to dash for cover in case of danger. Danger calls can even relay what type of predator it is and where the threat is coming from (terrestrial vs. aerial predators).  There are also calls to indicate when they are at play. 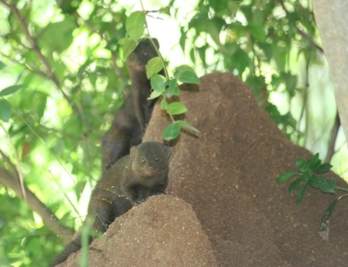 Habitat
Common in savanna and dry open woodlands that are associated with termite mounds, which are utilized as shelter. In the absence of termite mounds, fallen tree logs and rock crevices are used as substitute shelter.  The Dwarf Mongoose avoids montane areas (altitude > 2000m), thick forests and arid areas.

Food
The diet of a dwarf mongoose is primarily insectivorous and consists of insects such as grasshoppers, beetles, and larvae, though fruits and small vertebrates such as snakes, lizards and rodents may also be consumed. Dwarf mongooses are diurnal feeders that forage during the day in grass and tree undergrowth for flying and crawling insects. They also dig up insects and larvae from litter and soil. To minimise predation during foraging, sentries are posted among the group members to be on the lookout for potential predators such as birds of prey, jackals and snakes. 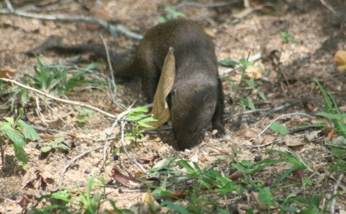 SEX and LIFE CYCLES
Sex
Within each group, only one, dominant pair breeds. In females it is thought that reproduction is suppressed in other females through blocking of ovulation, fertilization or implantation, while in males reproduction is suppressed by aggressive interference of mating attempts of subordinates by the dominant male. Despite this enforced reproductive suppression, subordinate group members often breed and subordinate females can produce 12% of the group’s litter while subordinate male may sire up to 25% of the offspring. However the survival rate of offspring from subordinate females is often low due to the dominant female killing the young of other females. The breeding season for the dwarf mongoose occurs during the wet season between the months of October and April, when food availability is high. The breeding cycle is highly synchronized among female group members, with the dominant female going into oestrus first followed by the subordinate females a day later. The duration of the oestrus period is 1 to 7 days and gestation period is 49-53 days. Two to four litters are produced per breeding season and each litter may contain four to six pups. The offspring are usually born and reared in termite mounds and adults members of the group undertake cooperative breeding by assisting in the feeding, grooming, and guarding of the offspring. Pregnant subordinate females may nurse the offspring of the dominant female and it is also not uncommon for non-pregnant females to lactate and help in the communal nursing of the groups` litter.  The offspring are sexually mature after one year but may not breed because of reproductive suppression unless they emigrate to start a new colonies or through succession. In the wild, males are known to live up to 10 years and females for 14 years. Captive specimens are known to live up to 18 years. 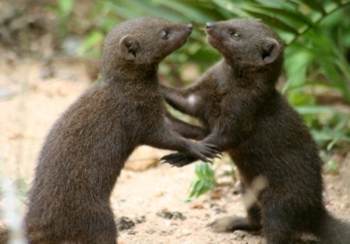 Family life
Dwarf mongoose are a highly social species  that live in cohesive groups of three to 30 individuals that collectively engage in cooperative breeding, territory defense, sentry duties to look out for predators, babysitting and grooming. Each group is led by a single breeding pair (usual the oldest individuals in the group).

Friends and Foes
Enemies of dwarf mongoose include birds of prey (e.g. Goshawks, Martial and Tawny eagles, Bateleurs), snakes, jackals and larger mongoose species. Dwarf mongooses are known to form mutualistic relationships with other species to reduce the risk of predation. For example, they often forage together with hornbills, where hornbills act as predator sentries and warn the dwarf mongooses of approaching danger and in turn the hornbills benefit from eating insects flying after being disturbed by the mongoose. Dwarf mogoose also respond to alarm calls of other species such as hyraxes and squirrels.  Rough-scaled plated lizards (Gerrhosaurus major) also co-exist with dwarf mongooses in termite mounds were the lizards feed on the mongoose faecal material. 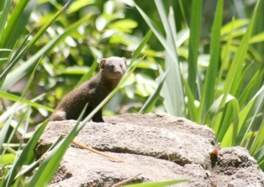 Smart Strategies
Several adaptations enable the dwarf mongoose to thrive in its environment and these are listed below.

3. Use of termite mounds, logs and rock crevices for shelter and refuge from predators

4. Adaptions of the nervous system that makes them relatively immune from snakes with neurotoxic venom.

Poorer world without me
Dwarf mongooses are often the smallest and most common carnivore in areas they occupy and because of their wide distribution and high densities they may play an important role in regulating rodent and insect populations.

People & I
Utilised as a food source in some parts of Africa. Also regarded as a pest (egg stealing) in areas where its habitat overlaps with human settlements.

Conservation status and what the future holds
There are no major known threats to the species and it is listed as a species of least concern on the IUCN Red List.