The vervet monkeys were placed in the genus Chlorocebus (meaning ‘green monkey’) by Grooves (2001) and he recognised six species in Africa: Ch. aethiops, Ch. cynosuros, Ch. djamdjamensis, Ch. pygerythrus, Ch. sabaeus, and Ch. tantalus, of which Ch. aethiops was recorded as occurring in southern Africa. However in a subsequent revision, Skinner & Chimimba (2005) retained the vervet monkey in the genus Cercopithecus. They argued that the status of aethiops is still somewhat confused in the literature, and until a consensus is reached it should be retained as a superspecies in Cercopithecus and with five sub-species C. (a.) aethiops, C. (a.)djamdjamensis, C. (a.) pygerythrus, C. (a.) sabaeus and C. (a.) tantalus, of which C. (a.) pygerythrus is the vervet monkey, which occurs in southern Africa. For the purposes of this assessment this taxonomy is adopted, and the vervet monkey of southern Africa is therefore referred to as Cercopithecus pygerythrus. 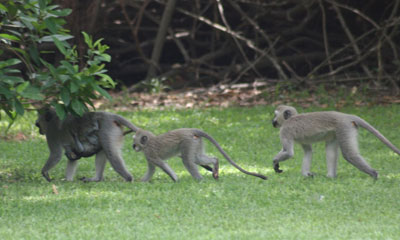 How to recognise avervet monkey 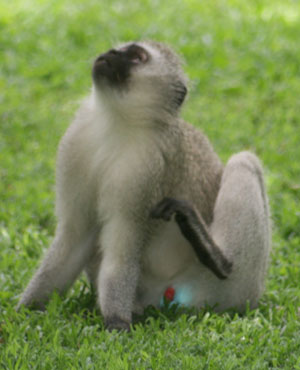 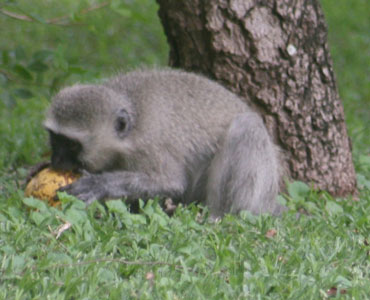 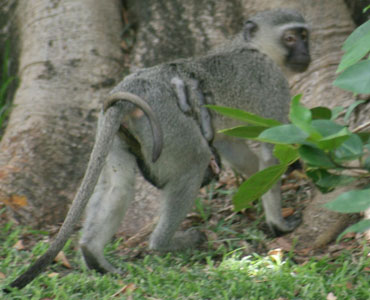 Vervet monkeys live in complex but stable social groups, called troops, numbering up to 50 individuals. Troops usually consist of multiple male members that may not be related. Within each group there is an order of dominance that is maintained by threat and aggression. Vervet monkeys use facial expressions (eye lid display) and body postures to communicate threats or aggressive behaviour. In vervet monkeys, the eye lids and adjacent areas have a light colouration that contrast sharply with the dark face. Retracting the eyebrows exposes these light areas and when this eye lid display is accompanied by a specific body posture (stare, crouching or upright body position) it functions either as a defensive or an aggressive threat. For example, a defensive threat display is associated with an eye display while the monkey is in a crouching position, while an eye lid display when the body posture is upright functions as an aggressive threat. Aggressive behaviour is also associated with thrusting head and body postures. Other displays include genital signals in male-to-male interactions that signify aggression, defence and avoidance. These include penile display by dominant males directed at subordinate males, and rump display by dominant males to subordinate males by displaying an erect tail, anal opening, scrotum and white fur tufts on the rump. The submissive male responds by crouching and uttering specific grunts. Vervet monkeys also spend much of their time (up to several hours per day) grooming each other. Grooming is used to reinforce social bonds, as well as to remove parasites and debris from the fur. 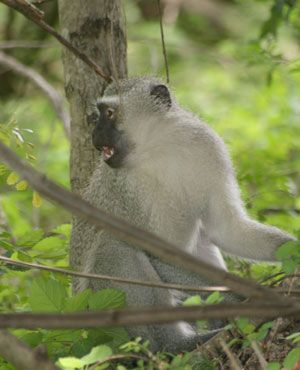 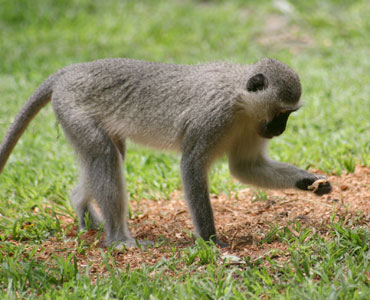 Vervet monkeys have been used for scientific research since the 1950s. They are still used to produce vaccines for polio and smallpox. They are also important in studying high blood pressure and AIDS. People use their skin to create traditional Zulu and Swati male clothes. Some people hunt them and sell the meat. As urban areas have spread and the natural habitat that they depend on has been removed and reduced, vervet monkeys have increasingly become a problem in some areas in South Africa. They raid dustbins and homes looking for food and damage plants and vegetables growing in gardens. Solving this human–monkey conflict in a way that is both effective and ethical is not easy. 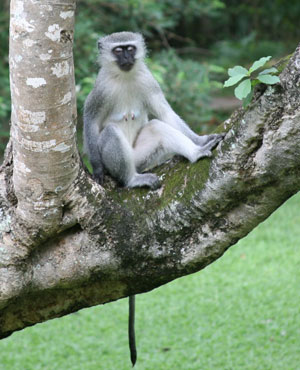