Skip to content
Home » Animal of the week » Fall Armyworm 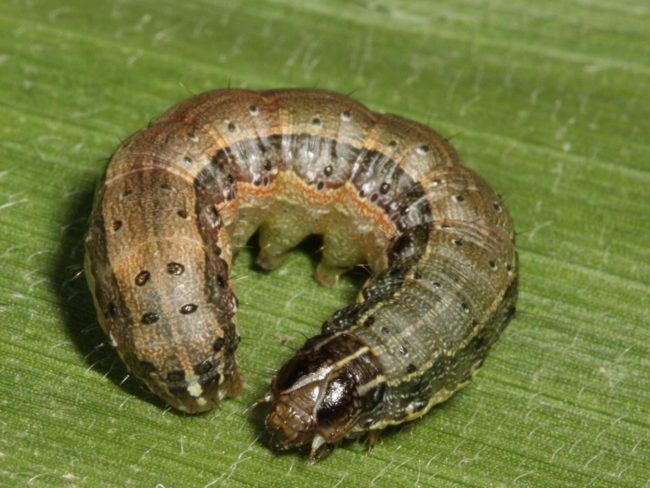 Derivation of scientific name
The scientific name derives from frugiperda, which is a Latin word meaning lost fruit. It is named for its capability to damage and destroy a large variety of crops.

First sentence/opening paragraph
Frugiperda spodoptera is a species that falls in the order of Lepidoptera. The fall armyworm is a large-scale invasive. It is called ‘armyworm’ because in its larval stage, individuals gather in huge masses (‘armies’), which can destroys large tracks of crops. It is native to South and North America, but alien invasive in Africa.

Description/How to recognise fall armyworm
The fall armyworm has a set of four dark large spots on the upper surface of the last segment of its body that forms a square. The face of the mature larva is marked with a white inverted ‘Y’ shape, which distinguishes it from other caterpillar pests. The life cycle includes several stages: laying of eggs; larval stage (which consists of six larval developmental stages called (instars)); pupal stage; and moth stage.

The egg is dome-shaped, the dorsal surface (upper part) body of the larva is brownish, the pupa is reddish brown, and both males and females have the appearance of silver-white hind wings. There is sexual dimorphism in the adult stage, with males having forewings that have distinct white spots whereas in females it is uniform.

Getting around
The larvae of fall armyworm have limited mobility because newly hatched larvae move in a looping motion. In contrast, the fall armyworm moth has the potential to spread further due to its long flying ability. It can fly up to 100 km per night. They can migrate about 480 km before laying eggs (per generation –all offspring born at the same time).

Communicating
Fall armyworm communicates for the purpose of mating by emitting pheromones. Females of the fall armyworm emit pheromones as a signal to attract males for mating. As each female mates only once a night, this results in fighting (competition) between males that fly towards a ready female during mating season.

Distribution
The fall armyworm is widely distributed in the eastern and central part of North America as well as in South America. It is native to the tropical and subtropical regions of America and it was confirmed as alien invasive in over 30 African countries in 2016. It has been detected and confirmed in six of the nine provinces of South Africa, with the exception of the Free State, Northern and Western Cape provinces.

Habitat and behaviour
Fall armyworm usually inhabits the underside of the leaves of corn (maize), grassweeds such as bentgrass and ryegrass. They are usually present in large numbers and migrate together. In North America, fall armyworm generation is seasonal, and it dies down during cold winter months whereas in Africa, generation is continuous throughout the year wherever the host plants are available. However, in South Africa, their specific patterns in terms of habitat and behaviour is yet to be determined.

Food
The fall armyworm’s diet consists mainly of grasses and grain crops. It can feed on leaves, stem and reproductive parts of more than 80 crop species. Primary preference is for maize and other main cultivated crops such as sorghum, sugarcane, rice, cotton, legumes, vegetable crops and pasture grasses. 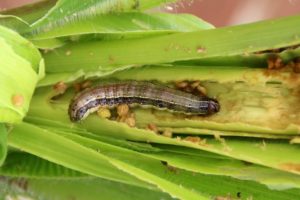 Friends and foes
The older larvae of the fall armyworm cannibalise the smaller (younger) instar larvae when the food is scarce and larvae are crowded. The cannibalism behaviour is a strategic mechanism to reduce competition by making more food resources accessible and indirectly increase the fitness of the fall armyworm. Flying predators like birds and insects that spend most of their time in crops are the most common predators of the fall armyworm larvae, which feeds on plants leaves.

Smart strategies
Fall armyworm reproduce fast and in large numbers. They do not diapause, which means that their reproduction is uninhibited as long as the host plants are available and that therefore there is a suitable food source. They can migrate over a great distance. They can hide within growing leaves and are capable of resisting several insecticides.

People and I
Fall armyworm manifestation cause damage to crops leading to the loss of food production and capital costs, as farmers tend to spend more money on paying experts to deal with pests and on buying synthetic insecticides as a measure control. Moreover, the use of insecticides then leads to a high health problem to human beings through inhaling and indirect consumption of crops containing insecticides. Introduction of natural enemies and predators might help to control the manifestation. 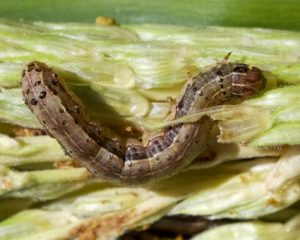 Conservation status and what the future holds
Fall armyworm is not indigenous to the African continent and its manifestation occurs in some provinces of South Africa. It’s an alien invasive and has no conservation status. It invades crops and cause damage wherever it is introduced. However, fall armyworm holds good for the future because it has two main important cell lines (sf9 and sf21) that are used for the expression of recombinant protein in biomedical research with the use of insect-specific viruses such as baculoviruses (natural hosts that infect invertebrates).

Relatives
The Noctuidae family has about 1 089 genera and 11 772 species globally. Fall armyworm is currently diverging into two separate species leading to difference in habitat and reproductive behavior. This main genetic difference depends on the food they feed on, for example: rice and corn strains.

Sex and life cycle
Oviposition (laying of eggs) starts in the same night that mating takes place and females lay eggs in batches of 100 to 200, and the eggs hatches in four days. It takes one month for the fall armyworm to complete a life cycle during summer times and two to three months in cooler temperatures. It does not diapause (manifestations occur non-stop throughout the year where it is endemic).

The duration of the egg stage is two to three days during summer. The egg is dome-shaped and measures about 0.4 mm in diameter and 0.3 mm in height. The overall egg production per female is within a range of 1 500 to 2 000.

Fall armyworm has six larval instars. The first larval instars are greenish with a black head turning orange in the second instar. The surface dorsal of the body turns brownish with lateral white lines forming in third instar. In the fourth to sixth instar the head is reddish brown, mottled with white, and the brownish body develops white subdorsal and lateral lines.

Fall armyworm pupates at a depth of 2–8 cm in the soil by constructing a loose cocoon. The pupa is reddish brown in colour and it is 4.5 mm in width and 14 to 18 mm in length. This stage takes about 8–9 days during the summer season and reach as much as 30 days during cooler weather.

Adult fall armyworm moths have a wingspan of 32–40 mm and the duration of the adult stage ranges from 7 to 21 days. The male moths have shaded grey and brown forewing with a triangular white spots at the tip of the wing. The female moths have a greyish-brown forewing that is uniform in colour. Both sexes have the hind wing that has an iridescent appearance (i.e. silver-white) with a narrow dark border.