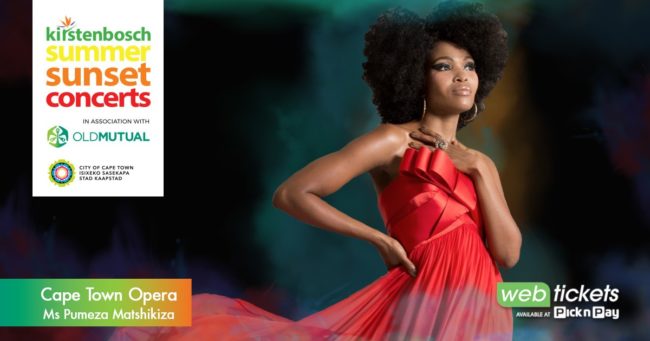 The Kirstenbosch Summer Sunset Concerts in association with Old Mutual will, for the first time, welcome South African lyric soprano Pumeza Matshikiza to the Garden’s stage on 22 March.

Hailed as ‘one of today’s most exciting new operatic voices’ and considered a rising star of her generation by fans and professional critics alike, Matshikiza’s voice has won the hearts of audiences in opera houses across the globe.

This summer, Capetonians will have a rare opportunity to hear her perform live on home ground. “This city is home to me and the Cape Town Opera, as well as Cape Town Philharmonic Orchestra, were some of my first musical experiences, so performing at Kirstenbosch feels like a beautiful return to where it all began,” said Matshikiza.

An exclusive Decca Classics recording artist, her debut album Voice of Hope was an eclectic arrangement of arias by Mozart and Puccini as well as traditional South African songs, while her follow up Arias showcased her later operatic roles from Puccini to Purcell. Concert goers will be enchanted by some of her favourite classical and African arias. “I will never tire of hearing the overture of Tannhäuser, for example, and the melodies of mbaqanga music,” she added.

Matshikiza’s performances will be accompanied by tenor Sipho Fubesi, the Cape Town Philharmonic Orchestra and Cape Town Opera Chorus, under the deft baton of Maestro Jeremy Silver. “Pumeza moved to the UK the same year I conducted my first show in South Africa, and our paths have been crisscrossing the world since. Although we have met many times, we have not had an opportunity to perform together, until now, so it is a special pleasure for me to finally share a stage with her, especially Kirstenbosch,” said Silver.

Every Sunday throughout the 2019/2020 summer, outdoor concerts are held at Kirstenbosch National Botanical Garden, where you can picnic and relish some of South Africa’s best live music while the sun sets. Moyo Food trucks serving freshly made burgers, boerie rolls, chipstix, beverages and snacks will also be available at the concert.