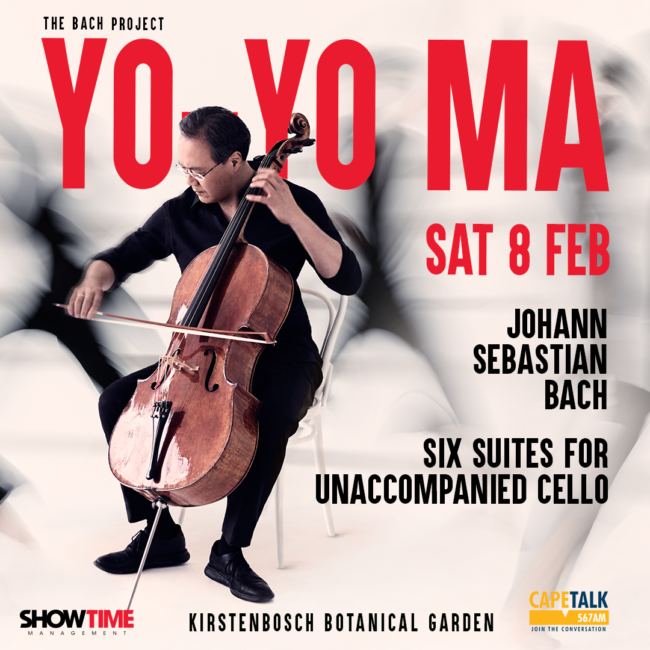 Kirstenbosch (ALL EVENTS HAVE BEEN CANCELLED)

In just a few months, cellist Yo-Yo Ma makes his long-awaited South African debut at Kirstenbosch National Botanical Garden in Cape Town, Western Cape. On Saturday, 8 February at 19:00, he will perform Johann Sebastian Bach’s Six Suites for Unaccompanied Cello without interval; his visit to Cape Town is part of his global Bach Project, presented locally by Showtime Management. Tickets on sale at Webtickets.

In August 2018, Yo-Yo Ma began the Bach Project, a two-year journey to play Johann Sebastian Bach’s six suites for solo cello thirty-six times on six continents. Since the project began, Yo-Yo has performed this extraordinary music in iconic and surprising locations including the Odeon of Herodes Atticus on the Acropolis in Athens, the ancient Huaca Pucllana in Lima, the Sydney Opera House, and Millennium Park in Chicago.

The Bach Project is a journey motivated not only by Yo-Yo Ma’s six-decade relationship with this 300-year-old music, but also by Bach’s ability to speak to our common humanity at a time when our civic conversation is so often focussed on division. “We live in a world of boundless possibility, but we also face daunting challenges, even to our very survival. I believe that during times of stress, confusion, and insecurity, we should share sources that offer comfort, purpose, and meaning. Bach does that. When his music touches us, it reconnects us to our common humanity,” says Yo-Yo Ma.

Alongside each concert, Yo-Yo and his team partner with artists and culture makers, cultural and community organisations, and leaders from across sectors to design conversations, collaborations, and performances.

Together with the concerts, these ‘days of action’ invite us all to think differently about the role of culture in society, exploring and celebrating all the ways that culture makes us stronger as individuals, as communities, as a society and as a planet. In Cape Town, as it does all over the world,  the Bach Project will explore how culture helps us to find truth, build trust, and act in service of one another.