The national bird of South Africa, the Blue Crane, is endemic to southern Africa with most of its range falling in South Africa. It is the world’s most range-restricted crane. Strong populations are found in the Overberg region in the Western Cape, the Eastern Cape and western KwaZulu-Natal, and in southern parts of Mpumalanga.

How to recognise a Blue Crane

Blue Cranes stand about 110–120 cm in in height, and weigh about 4.5–5.1 kg. Their wingspan is 180–210 cm. The plumage colour is pale grey, lightest on head and darkest on the tertial plumes. They can be distinguished from grey-coloured herons (e.g. the Grey Heron and Black-headed Heron) by their long tertial plumes, which almost trail on the ground, the differently shaped head and bill; and in flight by the outstretched neck. Juveniles lack tertial plumes, but otherwise resemble the adults. Chicks are covered in greyish down.

They fly at as much as 60–70 km/hr, sometimes in a V-formation, and walk on the ground while foraging. When threatened or disturbed, they may adopt a stiff, strutting walk while shaking their head and flicking the bill from side-to-side.

They communicate by making noisy calls, especially in flocks. Both sexes utter loud, guttural bugle-like notes, ‘krraaarrr’. Pairs perform a duet, dancing and jostling. Pairs and potential pairs engage in courtship dancing in which they bow to each other, leap into the air, take short runs and toss up bits of grass and small mammals into the air. Pairs then take break away from the flocks and take up occupation of breeding sites. Small young ones make a soft peeping sound until more than a year old. They start making the adult bugle sound from 10 to 11 months, but are only capable of the full bugle by about 16 months.

Blue Cranes are endemic to southern Africa, mainly the southern and eastern parts of South Africa from the southern and eastern Mpumalanga Highveld through the Free State, KwaZulu-Natal and the Eastern Cape. Flocks also occur in the Western Cape, especially in the Overberg area, and seasonally as far north as Nieuwoudtville. A small breeding population of approximately 60 individuals exists in northern Namibia, in and around the Etosha pan, and vagrants reach Botswana. There have been some unconfirmed records of sightings in Zimbabwe. They have been decreasing in numbers in the Eastern Cape and are no longer breeding at some former breeding sites in the province. However, they have increased their range in the Western Cape during the last few decades, inhabiting mainly agricultural areas. They frequent open country, such as Highveld grassland, Karoo, pastures and agricultural land.

The Blue Crane is a bird of open grasslands and other upland habitats. They are mostly found in natural vegetation in the eastern parts of their distribution (e.g. Mpumalanga and KwaZulu-Natal), but also utilises cultivated pastures and crop lands. Where shallow wetlands are available, Blue Cranes will roost and feed in them. They are also able to utilise grazed and burnt grassland. In more arid areas, such as the Karoo and Namibia, they are found in dwarf shrubland and dry grassland, but only where rainfall averages more than 300 mm per year. In the Western Cape, they are mostly confined to cereal crop fields and planted pastures. 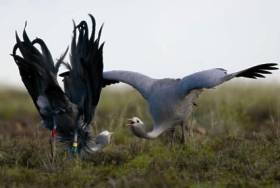 Evidence suggests that their diet is predominantly plant-based. However, Blue Cranes are omnivorous. They have a varied diet consisting of plant material such as small bulbs, seeds and roots, and animals such as insects (especially grasshoppers), small reptiles, frogs, fish, crustaceans and small mammals. They also eat fallen grains, e.g. wheat and maize kernels, and lucerne leaves.

Blue Cranes are monogamous and breeding pairs nest alone, away from other Blue Cranes. They are territorial when breeding, and will chase other Blue Cranes away from their nesting site and its vicinity. They prefer nesting sites in secluded grassland in higher elevations where eggs are laid in the grass or on the bare ground. In agricultural areas, they nest in pastures and fallow fields, as well as in crop fields when stubble becomes available after harvest. In winter, when they are not breeding, Blue Cranes are sociable and nomadic, whereas in summer they are sedentary and dispersed as breeding pairs.

Blue Cranes are single-brooded – breeding only once a year. They normally lay two eggs, which are incubated by both sexes. Incubation lasts about 30 days. Both eggs usually hatch, but due to sibling aggression, sometimes only one chick is reared successfully. The males take the primary role in defending the nest against possible danger. The chicks’ initial growth is centred on their legs and thighs, giving them an ungainly appearance when young, but making them very fast. Chicks fledge (first flight) between 3–5 months of age.

At the end of summer, the pairs and their young form groups; groups merge to form flocks, and there is then a general movement away from breeding sites. These winter flocks often number at least 50 birds and occasionally reach 300 or more; the birds feed together in old fields and roost together at night in shallow dams and ponds. Although sociable in winter, mature Blue Cranes probably remain permanently paired. Breeding sites are used year after year if the birds are not disturbed.

It often forages alongside Crowned Cranes Balearica regulorum and Wattled Cranes Bugeranus carunculatus, especially in croplands. It has been recorded hybridising with the Wattled Crane. 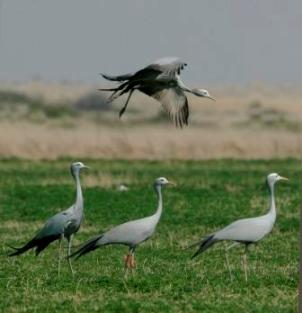 Blue Cranes have adapted well to the changes made to the landscape by agricultural activities. They usually nest in moist depressions, such as at the head of the valley where the incubating bird has a wide view and can sneak off if approached. They feed on a variety of food from insects to mammals, fish and vegetable material; this ensures that they have a wide range of food available at all seasons.

They often forage in old lands and feed on spilled grain and they may be helped through the lean winter months because of this food source; at times, especially in spring, they are liable to be a pest in lands where crops are sprouting.

The Blue Crane is South Africa’s national bird and such is probably familiar to many people since it is featured on the country’s stamps and coins, and is common in zoo and park collections.

Birders from around the world come to South Africa to experience the great variety of typical African birds, including the almost endemic Blue Crane, and thereby give a boost to our economy through tourism.

The Blue Crane is a special bird to amaXhosa tribe, who call it indwe. When a man distinguished himself by deeds of valour, or any form of meritorious conduct, he was often decorated by a chief by being presented with the feathers of this bird. After a battle, the chief would organise a ceremony called ukundzabela – a ceremony for the heroes, at which feathers would be presented.

Blue Cranes have declined in numbers due to habitat loss (urbanisation and human population growth), poisoning and power-line collisions. The population appears to be stable, but is still listed as Vulnerable in the IUCN Red List.

They were widespread and common in the Free State during the 1970s and early 1980s, but have since decreased significantly in numbers in that province. Generally, numbers have decreased in the eastern parts of their distribution, but in the Western Cape population growth has taken place since the 1960s, mostly due to suitable habitat opening up in the form of cultivated pastures and croplands.

Threats to their habitat include human population growth, loss and degradation of habitat through afforestation with alien pine and gum trees. Predation of eggs by dogs, collisions with transmission lines, urbanisation and crop farming all contribute to the decrease in numbers observed especially in the eastern parts of their distribution range. Poisoning by farmers, in response to the Blue Crane’s propensity for foraging in agricultural fields, have also had a negative impact on population numbers. In one recent horrific poisoning incident, one farmer killed over 200 Blue Cranes near Richmond.

There are only about 25 000 Blue Cranes left in the world, about half of which can be found in the Cape Overberg. All populations of Blue Crane require ongoing and thorough monitoring, as well as the implementation of appropriate management strategies in farming areas.

The South African Government has enforced legal protection for the Blue Crane. Other conservation measures that have been implemented are focusing on research, habitat management, education and recruiting the help of private landowners.

The Blue Crane’s closest relative is the Demoiselle Crane (A. virgo) of Europe and Asia.