The Eastern Cape region is diverse with all the major floristic regions merging here. However, plants originating mainly from the Albany Thicket biome are displayed, as it is the most threatened and interesting. Albany Thicket occurs in the dry intermontane and fertile valleys of the Eastern Cape and rich in succulent plant species. The climate of the region is unpredictable. With rain in summer or winter, the region is known for its floods or severe droughts.

The Enon Conglomerate geological formation is rich in endemic species and this rock type, together with shale, was introduced to the display. Thicket vegetation is not confined to the Eastern Cape alone but with relict patches elsewhere in Africa. Albany Thicket has a high proportion of endemic species and is characterized by its dense impenetrable growth of thorny shrubs and small trees, and many succulent plant species, many of these, finding shelter in the dense under-growth. 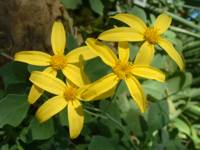 Aloes in the Eastern Cape Section 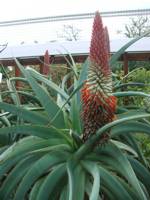 Aloes are well represented in thicket vegetation. They vary from tall erect species such as the tilt-head aloe (Aloe speciosa) (far left), the Uitenhage aloe (A. africana ) (adjacent), the French Aloe (A. pluridens) to the smaller climbing species such a the climbing aloe (A. ciliaris). Aloe flowers are pollinated by sunbirds and the latter frequently visit the conservatory.

Albany Thicket vegetation is well adapted to animal disturbance, from elephants to tortoises, and adapted to cope with animal grazing and abuse. It is so well adapted that this animal disturbance is sometimes vital for plant reproduction. These plants turn abuse into good use. The karkai (Crassula ovata) and other crassulas (in the family Crassulaceae) as well as some bulbs, Albuca longibracteatum,from this region root from a leaf or branch which has become detached from the mother plant. Branches of Portulacaria afra when becoming detached will root and sprout again. Adromischus and Gasteria leaf fragments will root when falling to the ground. Crassula arborescens subsp. undulatifolia is a shrub bearing grayish leaves. It also thrives in cultivation.

Many of the under-growth plants are well camouflaged. Gasteria and Ledebouria socialis have mottled leaves making them difficult to detect in the undergrowth. Gasteria excelsa is a large robust aloe-like plant with triangular leaves, flowering during summer. Gasteria bicolor is a common thicket species with mottled strap-shaped leaves. Gasteria pulchra has narrow pointed ascending leaves. It has small orange-pink tubular flowers.  All Gasteria species are pollinated by sunbirds.

There are also many climbing succulent plants such as Ceropegia, droog-my-keel (Cyphostemma cirrhosum), Delosperma, kambro (Fockea edulis) and Ivy-leaf pelargonium (Pelargonium peltatum). The kambro (Fockea edulis) has a large edible root, which can be eaten fresh or cooked. The Khoi and San tribes formerly used it. The elephant’s foot (Dioscorea elephantipes) has a large tuber with a corky tortoise-like bark. Annually it produces green climbing branches; small flowers succeeded by the fruit capsules and winged seed. Formerly used to extract cortisone, the plants are now protected. Males and females are separate. The climbing aloe (Aloe ciliaris) is an attractive species with red flowers pollinated by sunbirds.

Origin of some of the world’s best house plants 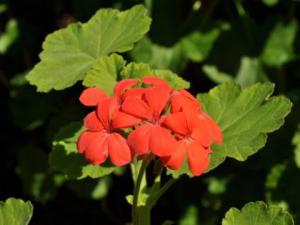 Some of the world’s best houseplants originate from this area such as the scarlet pelargonium (Pelargonium inquinans), ivy-leaf pelargonium (Pelargonium peltatum), hen-and-chickens (Chlorophytum comosum), Plectranthus madagascariensis and silver squill (Ledebouria socialis) etc. The bitter aloe (Aloe ferox) has been planted in the background. The leaves of the bitter aloe, common in the Eastern Cape region, are fed to livestock during drought which rids them of ticks. The sap is extremely bitter.

Go to our plant information website to find out more about the plants and how to grow them.