South Africa is well known for its rich diversity of dwarf succulents, especially its stone plants. This corner unit displays typical stone plants including Lithops species, Pleiospilos species, Argyroderma species and Gibbaeumspecies as well as other dwarf succulents, such as Crassula species and Conophytum subfenestratum which resembles a pebble. The display represents a transect through South Africa, from the west coast desert to the east coast of the Eastern Cape. The middle beam of the corner unit more or less divides the winter and summer rainfall flora. 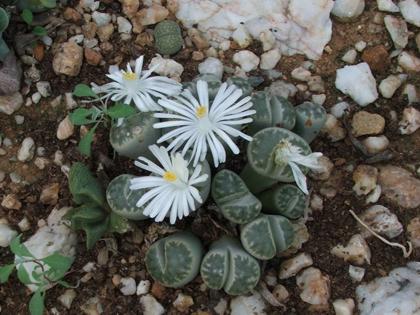 As most stone plants come from the quartz gravel flats, this corner unit is based mainly on the Knersvlakte. The name comes from the grinding sound, kners in Afrikaans, of one’s footsteps on the stones as one walks over the ground. The gravel was collected from Kwaggaskop farm, belonging to Mr. Buys Wiesse.

Go to our plant information website to find out more about the plants and how to grow them.