The Namaqualand region is well known for its spectacular spring floral displays. The region includes the winter rainfall western parts of the Northern Cape adjacent to the Atlantic Ocean. The climate is semi-arid to arid, the coast sandy and rocky hills towards the escarpment. The coastal parts are cool but the inland portion very hot and dry in summer. The annual display is caused by the dormant annual seeds, which germinate in mass during autumn, followed by winter rains. The result is a spectacular spring show. The plants disappear over the dry summer period, surviving in seed form waiting for the next rainy season.

The Richtersveld is situated in a spectacular mountain desert landscape, located in the north-western corner of Namaqualand. The dominant geological formation of Namaqualand is granite. The region also represents one of the world’s richest succulent plant concentrations and the vegetation is Succulent Karoo. 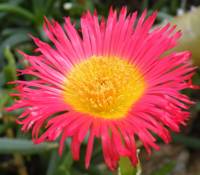 Plants from the Namaqualand section of the conservatory originate from various parts in the region and represent typical examples, with the mesembs forming the core of the collection. These include Stoeberia spp., Astridia sp., Cephalophyllum, Enarganthe, Lampranthus, Prenia and Cheiridopsis, all colorful when in flower. Jordaaniella spongiosum (adjacent) has large pink/orange flowers with a distinct yellow centre.  Sceletium tortuosum is known as kougoed in Afrikaans. The fermented leaves were formerly used medicinally as a sedative. It has creeping stems with soft fragile succulent leaves and straw-coloured flowers.

Natarra fig and halfmens
The natarra fig (Ficus ilicina), a rock clinging shrub has also been introduced and some trained up the main poles. The halfmens (Pachypodium namaquanum) has cylindrical spiny stems and adult plants somewhat resemble a human, hence the Afrikaans vernacular name. It has tubular flowers during spring, and is pollinated by hawk moths. 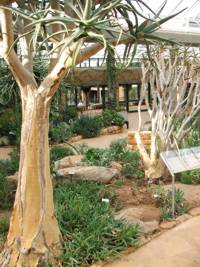 The large quiver trees (Aloe dichotoma) and granite rocks were donated from Goegab Nature reserve near Springbok. This very decorative tree aloe, which can grow up to 5 m has forked branches and a rounded crown. It has a striking white and yellowish bark and produces bright yellow flowers during winter.  In nature it is pollinated by sunbirds.The Khoi and San tribes used the hollowed out branches for storing arrows.

Other noteworthy plants grown here are the bastard quiver tree (Aloe pillansii) and Pearson’s aloe (Aloe pearsonii), the latter a shrubby species from the Richtersveld region.

Euphorbias
The spurge family (Euphorbiaceae) are also well represented here. Euphorbia dregeana is a multi-stemmed shrub bearing extended cylindrical stems. The poison euphorbia or gifnoors (Euphorbia virosa) is cactus-like in appearance with milky latex that is a severe irritant to the skin and eyes.

Namib spekboom
The Namib spekboom (Portulacaria armiana) is a shrub of 1 m in height and producing long whip-stick like flowering branches to 4 m in length. It is a slow grower with large gray smooth leaves.

Bulbous plants
Massonia bifolia is a curious bulb with large fleshy leaves and green flowers in winter. It is summer deciduous. The Gariep bowiea or lopertjie (Bowiea gariepensis) is another curious bulb introduced into this section. It has a gray climbing inflorescence with white flowers in winter. The paint brush or rooikwas (Haemanthus coccineus) has two large ear-like leaves becoming leafless in summer. Its conspicuous red flowers resembling a paint brush or powder puff (kwas) are produced in the autumn. The Richtersveld cyrtanthus (Cyrtanthus herrei) is a large bulbous species from cliffs in the Richtersveld. It has evergreen leathery strap-shaped leaves and flowers in autumn.

Shrubs
The Namaqua red balloon or kloekloekie (Erythrophysa alata) is an erect evergreen attractive shrub from Namaqualand. It has red sunbird pollinated flowers and reddish balloon-like fruit. These are wind dispersed. The Namaqua jackal-berry (Diospyros acocksii) is a slow-growing rare shrub only known from a few sites. The Hunsberg plumbago (Plumbago hunsbergensis) is another small shrublet with pinkish flowers in summer.

Pelargoniums
Pelargonium is also well represented in Namaqualand. Pelagonium paniculatum is the more robust, a shrub that can grow up to 2 m tall. It has stems as thick as a man’s arm. The Rosyntiesberg pelargonium (Pelargonium desertorum) is very aromatic. The latter has a chemical defense against browsers.