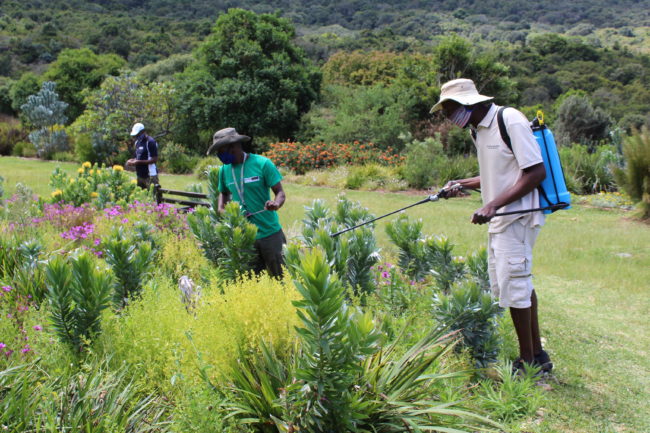 Kirstenbosch National Botanical Garden in Cape Town, in collaboration with the Botanical Society of South Africa, Table Mountain National Park (TMNP), FABI (Forestry and Agricultural Biotechnology Institute) and the South African National Biodiversity Institute (SANBI), has launched an innovative project to save an endangered tree which only occurs naturally in a tiny area of the Cape Peninsula.

The Silver Tree, also known as the Silver Leaf Tree, Witteboom, or Silwerboom, is a protected evergreen tree which is part of the Protea family. This enormous silver Protea is naturally confined to a tiny area in and around the city of Cape Town – with its main population growing on the slopes of Table Mountain, notably the Lion’s Head area, above Rhodes Memorial and the mountain slopes above Kirstenbosch National Botanical Garden.

Historically, the Silver Tree was widespread on Table Mountain, covering much of its slopes in shimmering silver forests. However, early demand for timber led to much of these forests being felled and now the Silver Tree is a rare and threatened species – in danger of becoming extinct in the wild in the next 50 years if we do not take care of the remaining wild populations. 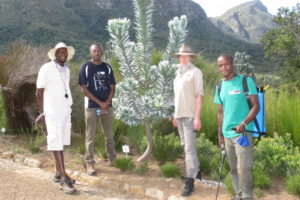 Unfortunately, this rare tree is susceptible to infection from a fungus called Phytophthora cinnamomi, a soilborne pathogen that causes root and collar rot. Phytophthora feeds on living plant roots and stems, reducing the plants’ ability to transport water and nutrients – often leading to the death of the host.

Dr Trudy Paap, Dr Mesif Gosa from FABI, Mashudu Nndanduleni and Mpendulo Gabayi, the conservation horticulturists at Kirstenbosch National Botanical Garden explain that this devastating introduced pathogen is present in wild Silver Trees as well as in the population found in Kirstenbosch National Botanical Garden, where it is causing the death of many of these trees. “Unfortunately, the soil in some of our garden beds is infested with this devastating organism, which is why many of the Silver Trees in Kirstenbosch are dying.” 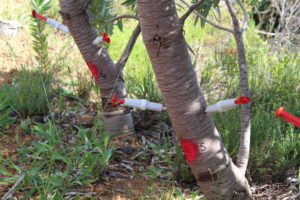 In a bid to save the Silver Trees, Kirstenbosch, in collaboration with FABI, have launched a phosphite treatment trial.  “We are testing the application of a biodegradable fungicide known as phosphite, which can protect plants against Phytophthora die-back. Phosphite will not eradicate Phytophthora from the soil, but it can protect plants from infection, and can help them recover if they are already infected,” explains Dr Paap. “We have sprayed some of the Silver Tree seedlings and injected bigger trees with phosphite. We have also left other plants untreated, as controls, and are monitoring the survival rates of the treated and non-treated trees.”

Phosphite is used in South African agriculture and horticulture settings to guard against Phytophthora root and crown rot of several important commercial crops. However, it has never been applied to indigenous South African flora.  “The team is incredibly excited about the first use of this treatment on indigenous South African flora and are optimistic that the trials will confirm the suitability of phosphite application as a means to protect this iconic tree species,” says Dr Trudy Paap from FABI (Forestry And Agricultural Biotechnology Institute). 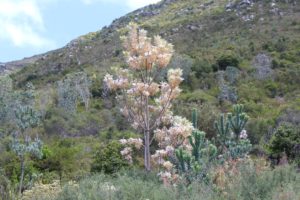 “Not only do we hope to find an effective treatment against Phytophthora in order to save the Silver Tree population in Kirstenbosch, but we also have the objective of restoring 8000 Silver Trees to sites where historically they occurred naturally.”

Visitors to Kirstenbosch may notice marked trees. This is to assist with the monitoring of the project and people are urged not to remove these tags. Kirstenbosch are also calling on the public to stay out of the plant beds as the microscopic spores of Phytophthora are easily spread on the bottom of shoes.

“SANBI’s overall mandate is ‘To explore, reveal, celebrate, and champion biodiversity for the benefit and enjoyment of all South Africans’. To this end, conservation projects such as this one, which plays an integral part in the protection and survival of indigenous trees, are essential,” concludes Gabayi.