Skip to content
Home » Animal of the week » Black wildebeest 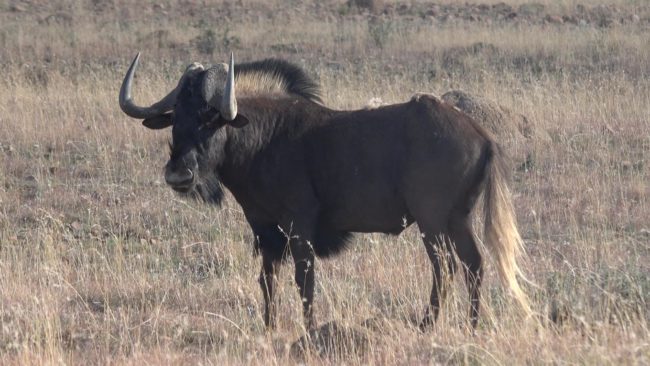 Derivation of scientific  name: Connochaetes is derived from the Greek word kónnos, which means ‘beard’, and gnou originates from the honking call they make, which is described as ge-nu.

Black wildebeest, which is also known as the white-tailed gnu, has a white fluffy tail that resembles a  horse’s tail, but as its name suggest,  black wildebeest is indeed blackish in colour. This mammal is an even-toed ungulate antelope species and is endemic to South Africa, Swaziland and Lesotho. Black wildebeests have been trophy hunted for many years.

Mature males are dark brown in colour, which appears to be black; the juveniles and females are lighter brown, and new born calves are fawn (light yellowish tan) in colour. They have a large head with wide nostrils and a tuft of stiff black hair on the top of the muzzle, a black beard and a long fringe running underneath the neck all the way to the forelegs, they also have a stiff mane on the back of the neck.

Horns are present in both sexes with the males’ horns much heavier and thicker than those of the females; the horns  grow downwards and forwards, and then curve sharply upwards. In calves, the horns grow straight up, beginning to curve at about age nine months. Males grow to 1.2 m  in height and they weigh about 160 to 205 kg; females are 1.15 m in height and weigh 130 to 145 kg.

Black wildebeest are mostly active in the early morning and late afternoon, resting in the middle of the day. When threatened they gallop around and stand with their forelegs on the ground whilst kicking with their hinged legs. They quickly run forward for a distance then stop to turn and look back to where they came from.

Black wildebeest give a  loud snout and make a ge-nu-like sound to warn of danger. They also make a loud ‘hic’ sound accompanied by an upward jerk of the chin. 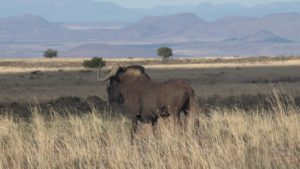 Black wildebeest are endemic to South Africa,  Swaziland and Lesotho. They were found in large populations in the Free State, Northern Cape and KwaZulu-Natal. Due to hunting by humans, they were greatly reduced in numbers, and came close to extinction. They were then reintroduced in many other provinces including Western Cape, Limpopo and Eastern Cape.

Black wildebeest occur in  open Karoo and grasslands where they have access to water. Black wildebeest prefer areas with short grass, which they can feed on and which give them better visibility to be able to keep guard against predators. . Open habitat with good visibility is also essential for reproductive behavior; territorial males require unblocked views of their territories in order to breed.

Black wildebeest are unselective grazers and they prefer short grasses. They are attracted to burned sandy grassveld on south-facing slopes..Their diet consist of 93% grass, 3 to 34% Karoo bushes and 3% forbs. They move more than 500 m away from water and shade when grazing. When their movement is restricted, they tend to overgraze an area Calves begin grazing before a month old.

In the wild, black wildebeest can live up to 22 years. Mating is in March to April and calves are born from November till January, depending on where they occur. The gestation period is 8.5 months, after which the female gives birth to a single calf that are able to follow its mother within minutes of birth. Calves are fully independent at about six months old. The females first mate at 16 months and get their first calf at two years. Males reach sexual maturity at 16 months and start mating at 3 years.

Black wildebeest form breeding herds of ten to 60 animals, within which three social groups are formed: one being the female herd made up of adults sub-adults and calves. Then there is a bachelor herd made up of adult and sub-adult males. The last one is for the territorial adult bull. The bachelor herds move around whereas the female herds are strongly attached to home ranges. The territorial  bull chases the bull calves away from the breeding herd once they are a year old and they then join the bachelor herd.

Black wildebeest are grazers and they play a huge role in grazing the grasslands, thereby controlling grass growth. They are preyed upon by carnivores like lion,leopard,hyena and crocodile. The crocodiles attack old, sick and young black wildebeest when they drink water, they drag them into the water and pull them underneath until they drown. Lions target the matured black wildebeest and hyenas and leopards targets the calves. 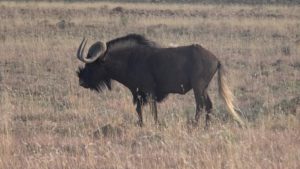 Black wildebeest live in herds, which helps prevent unnecessary attacks and it makes it easier for them to spot the predator quickly. The calves are ready to run with the herd within minutes after birth and this is a very valuable strategy, because when a predator tries to attack even newborn calves are able to escape with the whole herd.

They play a role by being a source of food to many large predators in the wild.

This animal is found on the KwaZulu-Natal coat of arms. It was mostly hunted in the early days for its skin, which was used to produce leather, and even today people still hunt it for this reason, for trophies and for its meat.

This animal once roamed the grasslands of South Africa in hundreds of thousands, but due to human hunting in the late 1800s, it nearly went extinct. Thanks to a couple of farmers in the Free State province that came up with a conservation strategy, today more than 18 000 of black wildebeest occur throughout South Africa and are categorized by the IUCN as Least Concerned (LC).

Black wildebeest are related to blue wildebeest (C. taurinus). If kept together in a fenced land they will hybridise and the hybrids are bigger than both parents and are known to be fertile.