Skip to content
Home » Animal of the week » Barn swallow 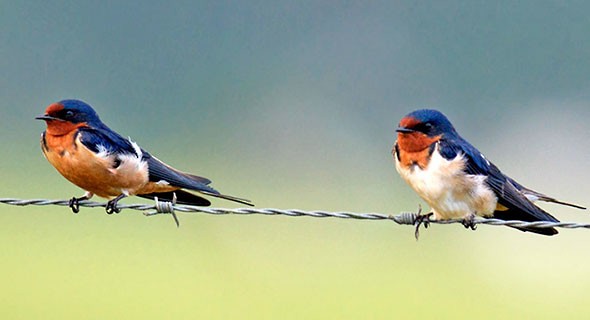 Barn swallows are the most abundant and widely distributed species of swallows in the world and an estimated 22-44 million birds from west Europe and 44-88 million from east Europe and Asia enter Africa annually on southwards migration.

Barn swallows are relatively small birds weighing approximately 20g at a length of about 20cm (Hockey et al. 2005), they have a chestnut rufous throat and forehead, a blue-black breast band, glossy steel-blue upperparts and a deeply forked tail. They have a white belly and flank which clearly shows on the tail when spread.

The birds are paleartic-br summer migrants (Hockey et al. 2005) who spend their winter in parts of Central and South America, and have been found as far as Argentina. Because they are aerial insectivorous, they spend most of their time in flight, and can spend all day going up and down feeding and also feeding their young.

Barn swallows render a loud witt-witt contact call given all year round (Keith et al. 1992) and they use vocalisations and body language (postures and movements) to communicate. They have a wide variety of calls used for different purposes, from predator alarm calls, to courtship calls and calls of young in nests. Nestlings give off a faint chirp while begging for food. Barn swallows also make clicking noises, which they create by snapping their jaws together (Brown & Brown 1999).

Barn swallows have a wide distribution range and are reported from Africa, Europe, America and Asia and breeds in the Paleartic and Nearctic (Keth et al. 1992). They have breeding ground across North America and Eurasia. In non-breeding season, the population moves to South Africa, America and southern Asia. (SABAP 1; Hockey et al. 2005; Harrison et al. 1997).

In the breeding areas, large flies make up around 70% of the diet, with aphids also a significant component. However, in Europe, the Barn swallow consumes fewer aphids than the House or Sand martins. On the wintering grounds, hymenoptera, especially flying ants, are important food items (Chittenden et al. 2016).

Sex: The female Barn swallow first breed at the age of one and the male can remain unpaired until two years old (NatureServe 2010). Generally the clutch size ranges from 2 to 7 eggs, although it is commonly 4 or 5 eggs in the nest. The female incubates more than their male counterparts and the incubation lasts approximately 13 to 14 days (Smith & Montgomerie 1991). The female chooses the nest site and the male partner, with the later influenced by feather length and colour. Both the males and the females defend the nest but the male is particularly territorial and aggressive.

Family life: Barn swallows are socially monogamous but extra-pair copulation are common, making this species genetically polygamous (MØller 1994). The breeding pairs form each spring after arrival on the breeding grounds, with the pairs that nested together successfully most likely to remain mated for several years (Shield 1984). Barn swallows are highly gregarious and are found in loose flock during the day but at night they roost in groups of a few hundred to 2-3 million birds (Van den Brink & Van der Have 1993).

Barn swallows are preyed on by a number of predators including American kestrels, rats, snakes, domesticated cats etc. And many are trapped and eaten on migration through Africa, especially in east, west and central Africa (Oatley 2000) .They usually give alarm calls when predators come near. Most predators attack the young ones, while other birds such as hawks, falcons and owls tend to feed on the adult Barn swallows (Barker et al. 1994; Brown & Brown 1999).

To escape predators, Barn swallows are swift and agile in flight, and they also build their nets in places that are difficult for the predators to reach (Barker et al. 1994; Brown & Brown 1999).

Barn swallows are quite effective in reducing insect pest populations, and also serves as indicator or trigger organisms. A decline in their relatively abundant numbers may precede other more obvious effects of extreme weather conditions such as unseasonally cold weather, rain and hail storms (Broekhuysen 1953; Martin 1995; Vincent 1969; Moore 2001; Perrins 1989).

Barn swallows are also useful food source for many predators like raptors (Bijlsma et al. 1994) and Marabou storks (Bennun 1992; Barker et al. 1994; Brown & Brown 1999; Wolfe 1994). As one of the earlier migrants, this conspicuous species is also seen as an early sign of summer’s approach.

Because Barn Swallows feed on and reduce populations of flying insects, they are tolerated by humans and are often reported to be nesting on human structures. Many cattle farmers believed that barn swallows spread Salmonella infections, however a study in Sweden showed no evidence of the birds being carriers of the bacteria (Haemig et al. 2008).

The Barn swallows are common and abundant, non-breeding paleartic migrants that have an enormous range, with an estimated global Extent Of Occurrence (EOO) of 51,700,000 km2 (20,000,000 sq mi) and a population of 190 million individuals. The species is enlisted as least concern on the 2007 IUCN Red List (BirdLife International 2012) and although not globally threated, the populations are decreasing in many parts of Europe (Engen et al. 2001; Hagemeijer & Blair 1997).