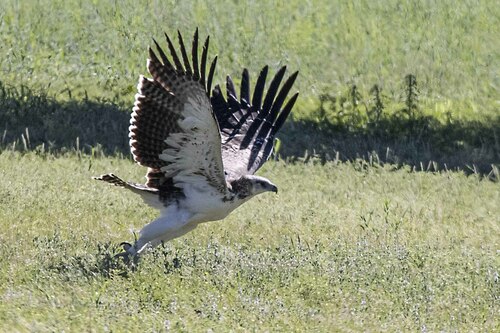 Martial Eagles are some of the largest, most powerfully built eagles in Africa. They are similar in size, weight range and wingspan to the Verreaux Eagle, with the mean mass of the Martial Eagle only slightly heavier. The northern hemisphere Golden Eagle, which has a small part of its distribution in north Africa, has a similar body mass, but shorter total length and wingspan.

Martial eagles are large raptors with broad wings, long tarsi and legs, sharp long claws, a short tail, and a short crest of feathers on the back of its head. The physical characteristics of these birds change throughout their growth phases. Nestlings have dark brown eyes; their downy feathers appearing dark grey above, with large pale grey patches and flanks, a pale grey forehead, cere and legs.

Immatures and sub-adults are also dark grey above and below white with two lines of dark spots on each side of the breast, their underwings are grey-brown and white, and coverts are covered in spots, the wings and tail are barred and greyer in comparison to those of adults, they have yellow-brown eyes, grey to greenish cere and feet. The adults have intense yellow eyes; they are dark brownish-grey above, including the upper wing coverts with the edges of the feathers in a paler shade. 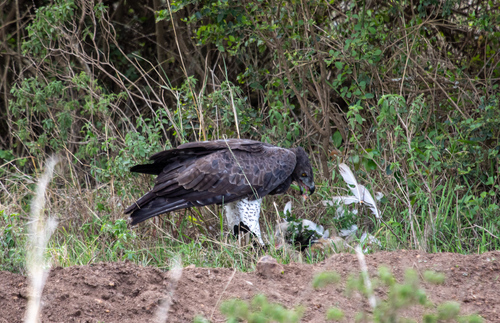 Martial Eagles spend most of their time soaring very high, mostly further than a human eye can see above ground. Their broad wings enable them to soar, and their tails are useful for steering them through different currents in the air and also assist in braking when they land; on land they move by a combination of wing and leg power – the wings propel them forward and allow them to be continuously lifted in the air and their strong legs drives them forward and upward.

Martial eagles utter different sounds or calls that signify a specific action or sometimes specific sound telling of the age of the individual: young, immature or adult. These birds normally display a loud series of notes ‘klee-klee-klee-klee-klooeee-kloeee-kule’ when perched or fighting. The most common call is the low whistle ‘hlueeoh’ or ‘queeeor’ when they are perched, the low gulping ‘quolp’ and subdivided ‘kwip, kwip’ calls that the young make when seeing food.

Martial Eagles are widely distributed throughout parts of Africa, including Senegal, West Africa, West Somalia and southern Africa. It is uncommon in Mozambique with less than 200 individuals estimated present, while South Africa has an estimated 550 pairs. In South Africa, the Eastern Cape, Western Cape and Northern Cape are home to approximately 150 pairs; while Free State has only about 12 pairs. The majority of these birds are distributed within strictly protected areas such as the Kruger National Park.

These birds can be found in a wide range of landscapes, in open shrublands, farmlands, grassy plains, thornveld, woodland, lowlands and semi-desert areas. They are most prevalent in areas with moderate tree and shrub cover, and areas with increased elevation and steep slopes, and they occur much less near rivers, in mountainous and grassland areas without any trees, densely wooded forests, and extremely arid areas.

They use trees for hunting, perching and roosting and the trees and bushes form an important part of their hunting strategy from where they launch unexpected attacks on their prey. In addition, they are rarely found near roads and other areas where there are evident anthropogenic pressures and transformed landscapes. They are known to prefer nesting in areas with high primary production.

Martial Eagles consume a variety of prey weighing between 1 and 5 kg, including birds, small mammals and reptiles. The preferred prey composition may vary in different regions and landscapes, depending on the availability of prey, and the impact of anthropogenic activities. In South Africa, for example, mammals may make up to about 89% of the diet in the arid western regions, with birds making up 10% and reptiles on 1%, while in the northeastern savanna, birds make up 45% of the diet, followed by 38% reptiles and only 17% mammals.

Mammal prey include hares, rabbit, warthogs, antelope up to the size of impala, young chacma baboons and other primates, jackal, striped polecat, ground squirrel, all the mongoose species, rock hyrax, caracal, pangolin and fruit bats. Bird prey include guineafowl, francolins, spurfowl, ibises and small bustards, and reptilian prey are dominated by rock and water monitors, while snakes, terrapins and tortoises are also taken.

Martial eagles can spot prey from up to 6 km away. They usually hunts on the wing, soaring high and attacking in a long, slanting stoop, but may also occasionally hover for short periods of time or attack from a high perch. It is known to stake out waterholes to catch birds and other prey coming to drink water unawares, and other times drops over game trails or a group of trees. Small prey is normally killed on impact, while larger prey is strangled; small prey is usually taken to high perch, and heavier and larger prey is consumed on the ground. 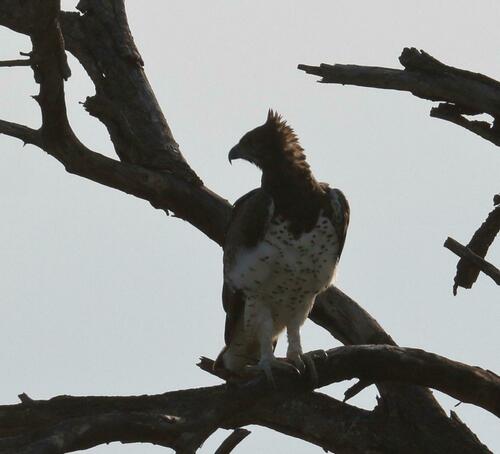 Sex: Martial Eagles are known to be monogamous and mate with the same partner for their entire lives. They may attempt to breed as often as once or twice a year, but the female may also only lay one egg every second year. The eggs are incubated for a period of 47–51 days and the young bird takes about 90–109 days to develop and become ready to fly. These eagles reach sexual maturity at six years old when they take on an adult appearance.

Family life: Martial Eagles mate for life, and these adult pairs are mostly known to be territorial, while some are ranging floaters. The adult pairs normally have exclusive home ranges dependent on their preferences and need for survival, and they defend their home ranges from other adult pairs of the same species. The roles between the male and female pairing are different during the breeding season. The female takes on the nurturing role of incubating the eggs and chicks whilst the male hunts and delivers food to the nest and also acts as a protector.

The sub-Saharan region is home to a diverse group of eagle species that share many characteristics, which imposes interspecific competition in some cases. The large-sized eagles that dominate in this region include Martial Eagles, Verreaux Eagles and Crowned Eagles. Their prey preferences may be similar, however, their habitat preferences and distribution range, and hunting, and nesting techniques are different, which eliminates some of the competition. Other eagles inhabit the same landscapes preferred by martial eagles and hunt the same prey, however, they are often disadvantaged in competition with Martial Eagles because they are smaller in size such as the African Hawk-eagle, Tawny Eagle, and the Bateleur or Short-tailed Eagle.

The robust body of the Martial Eagle is built for hunting. Their habit of soaring at very high heights, perching and moving swiftly towards prey makes them strategic hunters, and while they can see well from those heights, spotting prey from as far as 6 km away, they mostly can’t be seen by organisms from ground level. They have very strong and long legs with large feet, slender toes and very sharp talons enabling them to catch prey efficiently. Their broad large wings also enable them to be less prone of being robbed of their prey.

Martial Eagles are on top of the food chain where they have no specific natural predators of their own. They play a critical role in the ecosystem by being an apex predator that ensures that a balance prevails in the community composition of mammals, reptiles and birds. The most common service they perform is the removal of carcasses, this inhibits the spread of pathogens and diseases and alerts the farmers of possible poaching events by hovering over the carcasses which help with detection.

They are also valuable to the tourism industry through bird-watching activities and other money-generating interests concerning these species. Moreover, these birds can also be used as indicators of environmental health, their needs for survival and thriving are very specific and requires the environment to be healthy so when present it is a good sign.

Eagles have a history of being revered, feared and worshipped, and they symbolise different things in different cultures and religions for thousands of years, for instance, in the Christian religion, eagles are used in the bible as illustration of the strength a believer can possess; the Sumerians believe that eagles carry people’s souls to heaven after they have passed away; in battle the Romans carried an image of the imperial eagle along with their other essential cultural items they regard important for battle, they also believed that by watching eagles fly a gifted person is able to foretell the future; in Greek culture eagles were believed to be immune to lightning and farmers buried eagle wings in their land to protect them from storms; in native American culture eagles were believed to be prayer carriers to the creator, they also use the feathers of eagles to create cultural costumes and accessories and they wear them on their head as a mark of their identity.

In traditional medicine, eagle bones were believed to have healing powers and were used to cure humans of diseases. South African traditional practitioners and healers believe that when vultures or eagles’ brains are burnt and the smoke inhaled, their gifts will be enhanced and they will possess some of the birds’ qualities like foreseeing and swiftness There are also many false myths about eagles, such as how they prey on humans, specifically children, which is false. Most of these myths and cultural beliefs are not species-specific, Martial Eagles fall under these generalised beliefs about vultures and eagles. Some species are highly valued by collectors in the forms of live birds and eggs, which may indicate a risk of illegal harvesting and trade in these species, which is not currently well documented.

The Martial Eagle is listed as Endangered in the International Union for Conservation of Nature (IUCN)’s Red List Assessment in South Africa, Namibia, Eswatini and Lesotho because of the decline in the population. The species is subjected to several threats such as over-hunting of the naturally suitable prey for this species, which is one of the main threats, because it leads to the Martial Eagles consuming domestic animals.

This causes conflict and the farmers resort to poisoning or shooting these eagles in addition to indirect poisoning where the birds consume what was meant to trap other problematic animals. Habitat alteration, including agriculture and aquaculture, disturb the preferred environments for the species. Other threats include electrocution by power lines and pollution. In addition, these birds are also known for traditional benefits, and they are targeted by the muthi markets.

Locally in South Africa, it is encouraged that when farmers’ livestock becomes threatened by this species it should be reported and there is a system to compensate for the loss to avoid the persecution of the Martial Eagles. Moreover, on an international level, this species is listed in the Convention on International Trade in Endangered Species of Wild Fauna and Flora (CITES) Appendix II, which means trade in this species is under strict regulations that ensure sustainability and protection.

Polemaetus bellicosus is the only species in this genus. It is a sister to a clade that consists of Lophaetus, Ictinaetus, Clanga, Hieraaetus and Aquila.

Pictures: Peter Southwood Introduction The root-mouthed jellyfish (Eupilema inexpectata) is one of the few true jellyfish species that occur in […]