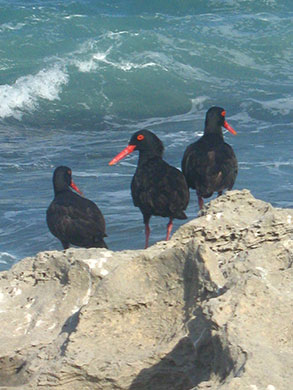 In 1856, Bonaparte described the African Black Oystercatcher as a species for the first time. He named the species ‘moquini’ after Horace Benedict Alfred Moquin Tandon. The genus name, Haematopus, means legs and feet red like blood.

The African Black Oystercatcher is a black bird with pink legs and feet, a bright orange-red bill and red eyes surrounded by an orange eye ring. This black bird is found along the coast of southern Africa. Both male and female have the same plumage colouration. The female is bigger than the male. Males have shorter blunt bills than the female. Chicks are well camouflaged with grey plumage and black stripes behind the eyes and along the crown. Juveniles have duller plumage.

The birds walk (feet) and fly (wings) along the coast. Chicks can also swim.

These birds use both vocalisation and display to communicate. They produce a loud kleep, klee-a or klee-eep sound. When in danger, the birds (adults and chicks) will produce a sharp repeated ‘pic’ or ‘pic-pic’ alarm call. Parents will perform an elaborate ‘distraction’ display to defend their young when they hear the alarm call.  A ‘distraction-lure’ display with no vocalization may be used by parents to divert the immediate danger from the chicks towards themselves. Parents may also perform repeated sessions of ‘false brooding’ display away from the nest-site. During breeding season birds will perform ‘piping’ displays to establish and defend territories, and ‘butterfly’ flights may be use during courtship.

African Black Oystercatcher is near-endemic to the coast of southern Africa. It is found from Angola to Mozambique with breeding places from Namibia to KwaZulu-Natal, South Africa.

These birds are found living on rocky, sandy and mixed rock and sandy coasts along the mainland and islands, and to a lesser extent, in estuaries and lagoons. Nests are simple shallow holes in the ground excavated in sandy soil, lined with rocks and shells. If the ground is too hard to dig into, shells and rocks are placed by parents around the rim of the nest. The nests are typically placed near the high water mark, concealed by rocks or kelp.

These birds are monogamous slow breeders; breeding exclusively along the coast of southern Africa. Breeding takes place from October to April with a peak during December and January. Females reach sexually maturity when they are 3 years old and males at 4 years. It is essential for the birds to establish a territory for breeding to commence. Females will lay 1–2, rarely 3, well camouflaged eggs in sand or rock depressions. Eggs are incubated by both parents for about 32 days before hatching.

The chicks hatch simultaneously in a fairly advanced physical state; however, they are still dependent on the parents for food and shelter. These chicks remain the same size until they are two weeks old when they become visibly different. The larger chick will fledge earlier than the smaller chick and it will have a greater chance of survival compared to the smaller chick. It will take 50 to 180 days after fledging for chicks to leave the parents’ territory for nursery areas. Adults are known to live for over 18 years. Populations on islands have a higher reproductive outcome followed by mainland protected areas and mainland unprotected areas respectively.

These solitary birds roost in flocks of up to 200 individuals during non-breeding season. These large numbers protect them from predators. Adults are non-migratory and territorial. Independent juveniles migrate from their parents’ breeding territory to nursery areas along the coast of Namibia and Angola, where they stay for 2–3 years before returning to their native area.

The African Black Oystercatcher has powerful neck muscles and a long, laterally flattened, chisel-shaped bill that is specifically adapted to jab between the partly open valves of mussels and scissor the flesh out. Chicks have a dull greyish plumage, which camouflages them well under vegetation, rocks or cracks. Chicks also swim well and may dive to escape danger. These birds are active day or night depending on when the tide exposes their foraging area.

African Black Oystercatchers are excellent indicators of the health of the coast because they are highly susceptible to human development. This bird has played a vital role in reducing and controlling the population of the alien invasive Mediterranean mussel (Mytilus galloprovincialis) within the marine ecosystem, thus reducing competition between the native and alien mussels, and increasing the population of native mussels along the coast of South Africa.

Humans have had both positive and negative impacts on the population of these birds. The introduction of an alien invasive Mediterranean mussel (Mytilus galloprovincialis) increased the food availability of the African Black Oystercatchers and allowed the birds to explore new feeding niches. Urban development and the use of recreational vehicles along the coast disrupted the bird’s population by destroying their breeding places and lowering breeding success.

The increased or stable population is due to improved management plans that were put in place to protect these birds as well the additional food source in the form of the alien Mediterranean mussel (Mytilus galloprovincialis) that lead to an increase in breeding success. Reduced human disturbance and the near-eradication of predator populations on islands played a huge role in increasing the birds’ population on islands.

The Oystercatcher Conservation Programme (OCP) was established in 1998 to increase the conservation of this species, raise public awareness and get local communities involved in the conservation of these birds. In 2000, a national ban of recreational vehicles along the beaches of South Africa was put in place. This ban reduced the level of disturbance along South Africa’s coasts, thus increasing the bird’s breeding success and population along the coastal areas.