Skip to content
Home » Animal of the week » African honeybee 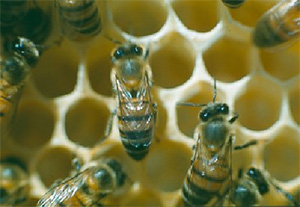 The African honeybee is native to central and southern Africa. Honeybees play an important role in human lives as they are managed by beekeepers to allow for honey harvesting and to provide a pollination service to farmers of pollinator-dependent crops. Humans have been keeping honeybees for thousands of years, yet we are continuously learning about them. Recent reports of massive honeybee losses across the world have helped encourage public interest in the honeybee and the flower resources the honeybee needs for survival.

How to recognise an African honeybee

While still having the characteristic yellow-striped abdomen of honeybees, the African honeybee is slightly smaller; the average body length of a worker is 19 mm. Its upper body is covered in short, fine hair and its abdomen is striped with black.

A honeybee has two sets of wings used for flight. The wing hooks enable the bee to attach one of each set of wings together during flight for maximum efficiency.

Honeybees communicate by performing a series of dance moves. Through the number of turns, duration of the dance and the moves themselves, they can communicate the distance of the food and the direction of the food in relation to the sun.

The African honeybee occurs in the natural veld of South Africa (except the Western Cape and some parts of the Eastern Cape) and central Africa. Some crops like sunflowers or subtropical fruit are important forage resources for managed honeybee colonies and beekeepers often trap wild swarms in these regions. Managed honeybees can abscond from hives to become wild again, and therefore the wild and managed honeybees are all related.

Honeybees forage on nectar (carbohydrates) and pollen (protein) of flowering plants, and they require a large diversity of pollen and nectar from different plant sources to be healthy. While some beekeepers may supplement a colony’s food with sugary water, this is not a long-term or healthy option. African honeybee beekeepers use a variety of plant species (including indigenous plants, crops and weeds) as forage resources for their bees.

The honeybee lifecycle includes egg, larva, pupa and adult stages. Honeybee colonies comprise of a single mated queen and 10 000 to 50 000 of her worker daughters. The queen can choose the sex of her offspring because of haplodiploidy (the sex-determination system of bees, wasps and other Hymenoptera). Diploid eggs are fertilised and produce female offspring (workers and queens), while unfertilised, haploid eggs develop as males (drones).

In order to mate, a queen flies with drone aggregations on one to four successive afternoons, mating with six to ten males on each flight. The average lifespan of a queen is three to four years; drones usually die upon mating or are expelled from the hive before the winter; and workers may live for a few weeks in the summer and several months in areas with an extended winter. The Cape honeybee is unique among honeybee subspecies because the workers can lay diploid female eggs, while workers of other subspecies can only lay haploid male eggs. This ability allows the Cape honeybee to become a social parasite in the African honeybee (A. m. scutellata) colonies, causing the colonies to dwindle and often die out.

The honeybee is a social insect feeding on pollen and nectar of flowering plants, while at the same time providing the essential service of transferring pollen from one flower to another – thereby facilitating pollination and the reproduction of flowering plants. Honeybee colonies around the world are experiencing problems with the varroa mite pest (Varroa destructor) and diseases like American foulbrood (Paenibacillus larvae subsp. larvae). Various invertebrates, birds and mammals prey on honeybees or raid their hives for the brood and honey.

Although it was believed that bees hibernate in winter, the colony actually creates a winter ecosystem inside the hive and lives off stored honey with the bees maintaining warmth by vibrating their wings.

The African honeybee is an important pollinator of flowering plants, including many of our thorn trees. Honeybees are used to pollinate about 50 crops across South Africa, including sunflower seeds and subtropical fruit found in the northern region of South Africa. Imagine your world without all the fruits and vegetables we rely on for a healthy diet!

In the Xhosa culture (Madiba clan), visitation by a swarm of bees is presumed to be a message from the ancestors who would like the family to do something for them (e.g. the brewing of traditional African beer (umqombothi) and/or the slaughtering of a goat). If the bees produced honey while they were visiting, all honey combs will be removed by a member of the family and placed on small branches before being consumed. But most importantly, words of respect will be said to the bees as they are being persuaded to leave.

In the Pedi culture, a swarm of bees in the yard is always taken as a symbol of the ancestors bringing luck to the family. One needs to then prepare some kind of African beer, but it should not ferment like umqombothi. It is called mashifa, and the sorghum should still be strong and prevalent in the water. You then summon the ancestors accordingly and acknowledge their presence and let them know that you anticipate the good wishes or blessings. The bees are never chased away or killed, and are left in peace to leave of their own accord.

Also in the Pedi culture, the queen bee is used in traditional strengthening. The queen bee is alive when she reaches the traditional healer, but is then respectfully killed and mixed in with a concoction that is applied to the face daily or weekly. This is to subdue your enemies and command respect from those around you – just like the queen bee does in the colony.

The African honeybee is not officially classified as Threatened; however, they are experiencing threats, including diminishing forage resources, pests and diseases, as well as problems arising from the misuse of pesticides and insecticides in the environment. Much research and action is needed to mitigate these threats, and SANBI is undertaking an important project researching the honeybees’ forage resource requirements. South Africa also has a unique problem in that the Cape honeybee (A. m. capensis) can become a social parasite if introduced in the other subspecies’ (A. m. scutellata) range. To remedy this, a dividing line has been drawn to separate the area in which A. m. scutellata and A. m. capensis can be used for beekeeping activities and no bees may be transported across the demarcation line.

Twenty-eight subspecies of Apis mellifera (the Western honeybee) occur across Asia, Europe and Africa, but only two are found in South Africa: A. m. capensis and A. m. scutellata. The oldest known honeybee specimen dates from 100 million years ago.