Skip to content
Home » Animal of the week » African leopard 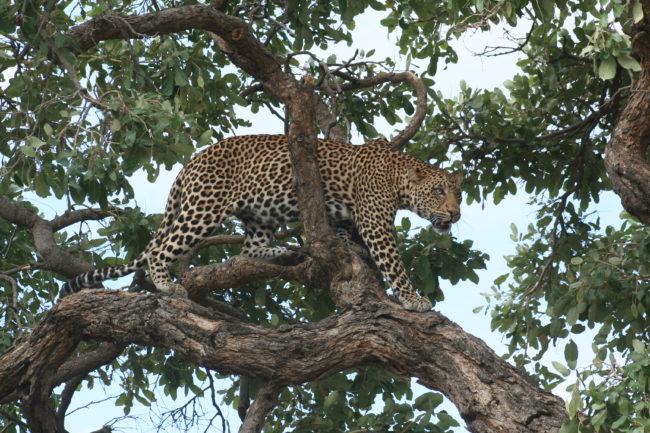 The common name, leopard, is a combination of the Greek words leōn (lion) and pardos (panther), which reflects the ancient belief that the leopard was a hybrid between a lion and a panther. The genus name, Panthera, and the species epithet, pardus, are, respectively, from the Latin and Greek for panther.

‘Secretive, silent, smooth and supple as a piece of silk, the leopard is an animal of darkness, but even in the dark it travels alone,’ – J. du P. Bothma.

There is no other large carnivore as elusive and shy as the leopard.

The African leopard vary greatly in size and colour depending on the location and habitat. Its colour ranges from pale yellow to deep gold or tawny, and is patterned with black rosettes while the head, lower limbs and belly are spotted with solid black. Two colour variations, black and strawberry, caused by autosomal recessive genes, occur and have for example been spotted in areas within Mpumalanga and the Magaliesberg mountain range in South Africa.

The species is sexually dimorphic with large male leopards weighing up to 90 kg in some areas, and females up to 60 kg. In the Kruger National Park the mean weight is 58 kg for males and 37.5 kg for females. The leopards from the coastal mountain areas of the Western Cape Province are much smaller, the males weighing on average 31 kg and the females 21 kg. An old male leopard can easily be identified by a very prominent dewlap.

Leopards are very stealthy and like to stalk close and run a relatively short distance after their prey. They kill through suffocation by grabbing their prey by the throat and biting down with their powerful jaws. Leopards are extremely mobile, agile climbers and immensely strong, being able to drag heavy prey high up a tree with apparent ease. 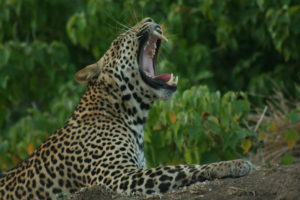 Similar to many other cat species, leopards use a variety of communication systems, which include vocalisations, body postures and various forms of chemical communication. The female uses her tail as a visual guide when leading her cubs somewhere, when returning to her cubs she makes a chuffing sound consisting of three or more short, sharp puffs to greet them.

Leopards also emit a characteristic hoarse, rasping cough to advertise their presence when moving through their range or territory. During or after feeding leopards can be heard purring loudly. Similar to lion, range boundaries are clearly marked by scent, or are proclaimed by making particular sounds.

The leopard is the most widespread felid, extending across much of Africa, as well as Asia from the Middle East to the Pacific Ocean. It has the widest habitat tolerance of any African felid and is the only species occupying both rainforest and desert habitats. Leopards are most abundant in woodland, grassland savanna and all forest types, but also occur widely in montane habitats, coastal scrub, shrubland, semi-desert and desert.

Approximately 20% (248 770 km2) of South Africa is suitable leopard habitat fragmented into four general regions: one stretching along the southeast coast, one occurring in the interior of KwaZulu-Natal, one encompassing the Kruger National Park and interior of Limpopo, and one in the northern region where the Kgalagadi Transfrontier National Park is located. Sixty eight percent of leopard habitat is currently outside of protected areas, and leopard conservation efforts should be focused on these areas, where leopards are most at risk.

The leopard has the broadest diet of larger obligate carnivores and can include beetles in buffalo dung, small mammals and even other carnivores. Leopards preferentially select prey weighing 10–40 kg, regardless of the presence of lions or other dominant competitors. In the African savannas the impala is an important and stable prey source for leopards and forms their staple diet even in years of drought. Although leopards can kill prey many times their size, they rarely do so, probably due to the risks inherent in attacking large prey as a solitary predator. Leopards are also not particularly water‐dependent; in the Kalahari, leopards have been known to drink only once in ten days.

Leopards of both sexes reach sexual maturity at 24 to 28 months, though they rarely breed before three to four years. Cubs are born after a gestation period of 90 to 106 days and litter size at emergence varies from one to three cubs. A leopard cub weighs between 500 g and 1 kg at birth. The cub’s eyes are closed at birth and only opens for the first time after six to ten days. In South Africa, cubs reach independence from ten to 18 months, and the interval between successfully raised litters varies from 16 to 24 months.

Leopard cubs are normally born in a secluded spot amongst thick vegetation, or in a suitable lair or burrow such as that of an aardvark or porcupine. Cubs suckle for approximately 12 weeks, but may start to eat some meat when about eight weeks old. From approximately three months old, cubs start accompanying their mother when she hunts. However, cubs may be left alone for up to six consecutive nights if the mother does not hunt successfully and this makes them highly susceptible to death from starvation and predation.

The cubs normally leave their mother when 12 to 18 months old, but female cubs may stay near their natal range for longer. Cub mortality is high in most areas and can vary between 35% and 90%.

The higher likelihood that human–carnivore  conflict and thus legal Damage Causing Animal (DCA) control takes place on private land are the most likely reasons for the shorter lifespans for leopard outside of protected areas. Longevity of wild leopards is poorly known, but females in protected areas have been recorded living to 19 years and males to 15 years. A study conducted in Karongwe Private Nature Reserve estimated the average productive live span of wild female leopard at 6.6 years (SE = 0.9 years).

Like most cats the leopard lives a solitary life, and the only groups formed are those of a female and her dependent cubs. Males and females only associate briefly to mate. In general leopards have well defined, but partially overlapping territories. One male territory can include a number of female territories. 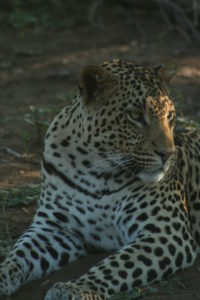 Describe the role of this species in the ecosystem and how adapts to its environment: Use the following subheadings.

Throughout Africa, the major threats to leopards are habitat conversion and intense persecution, especially in retribution for real and perceived livestock loss. Lions are sympatric with leopards in 91% of their extant range. A recent study showed that the adequate availability of suitably sized prey allow for resource partitioning between lions and leopards, thus facilitating their coexistence. The ability of leopards to climb trees may be a particularly important adaption in terms of allowing them to coexist with lions without segregating spatially.

Describe specific adaptations which enable it to thrive in the environment

Their behavioural plasticity allows them to persist in areas where other big cats have been extirpated or severely isolated. This adaptability does not necessarily inure the species against all levels of threat, however. The leopard’s adaptiveness is reflected by the fact that it is the most common large predator found in southern African fossil deposits, which date back 1.8 to 1 million years.

Even today, the leopard is the only large cat which can survive near human habituation. Think about the leopards that still persist in the Magaliesberg, just outside of Pretoria, despite a growing human population and urbanisation.

Large mammalian carnivores are incredibly important to ecosystems and environments. As apex predators, the extirpation of carnivores can trigger trophic cascades that can reduce biodiversity, increase the transmission of infectious diseases to humans, increase crop damage, reduce carbon sequestration and even modify river morphology. They are among the most sought after species by tourists, and they are of great economic significance through the tourism and hunting industries. Carnivores are also incredibly important to human societies. People tell stories about large carnivores in traditional fables, their likenesses inspire artwork, they play roles in witchcraft, and their products are used in traditional rituals and medicine.

The leopard is more revered than lion by many African people for whom the leopard is the ultimate symbol of power because of its courage and tenacity in attack. In these societies only men of high social standing may wear leopard-skin cloaks, and many secret societies have the leopard as their totem. Amongst the Karamajo and Acholi people of East Africa, leopard skins are part of the warrior’s regalia.

Leopard skins are used in ceremonial wear by a number of cultural and religious groups in KwaZulu-Natal and Swaziland. Most notably, members of the Nazareth Baptist ‘Shembe’ Church wear leopard skins as a sign of worship. A leopard’s claw are widely used to promote business stability. In West Africa the leopard is a symbol of wisdom, and leopard images are frequently carved by Ife and Benin sculptors. Even in ancient Egypt priests of the later dynasties wore leopard-skin vestments.

In South Africa, privately owned land is extremely important for the conservation of leopards, and carnivores in general. However, management of carnivore conflict through translocation and killing of DCAs are limiting carnivore persistence on private land.

Trophy hunting, when well-managed, can be an important tool for the conservation of species and habitats through the provision of financial incentives, especially when revenues are invested back into conservation and when benefits are shared equitably with local communities, and it has similarly been argued that trophy hunting can foster tolerance towards leopards. Southern Africa has a particularly well-established sport hunting industry that generates substantial revenues.

The total estimated financial value of leopard trophy exports from SADC (the Southern African Development Community) over the period 2005  to 2014 was USD9 964 702 (USD1520/leopard trophy). Approximately 14% of these trophies originated in South Africa (USD1 395 058). Leopard is also the most valuable trophy exported from SADC, followed by elephant (USD1303) and hippopotamus (USD759).

Leopard have lost 63–75% of its historic range worldwide and 80% of its past range in South Africa. As a consequence, the leopard has recently been uplisted to Vulnerable on both the global IUCN Red List and the Red List of Mammals of South Africa, Swaziland and Lesotho, highlighting an increasing concern over its conservation status. Similar to other carnivores, leopard numbers are declining across its range.

The key threats are all ongoing and include habitat loss and fragmentation, prey depletion, conflict with people, unsustainable trophy hunting, poaching for skins and body parts, and indiscriminate killing. In South Africa the main threat to leopard persistence is the illegal skin trade. Data generated from the South African Leopard Monitoring Project suggest an 8% decline in the national population per year, and significant declines in leopard density have been observed in five out of 18 sites surveyed in 2017.

Although leopards occur in numerous protected areas across their range, the majority of the population occurs outside of protected areas, necessitating a need for improved conflict mitigation measures, trophy hunting management, non-lethal mitigation actions, centralised monitoring of trophy harvest and quality, issuing of DCA permits as well as providing education programmes to ensure leopards do not become locally threatened.

According to genetic analyses, nine subspecies are recognised, with all continental African leopards attributable to the nominate form, P. p. pardus.