Skip to content
Home » Animal of the week » African mantis 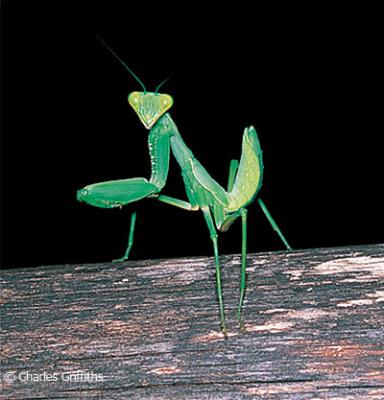 The common name, praying mantis, is derived from the Greek word for ‘prophet’ or ‘soothsayer’, and comes from the spiny, raptorial forelegs that gives it the characteristic praying posture when stationary – making it look like a praying person.

How to recognise an African praying mantis

The raptorial forelegs are their defining feature and African mantises use them to capture prey and defend themselves from predators. They are robust insects 1–17 cm in length. They have long, slender walking legs used for lunging. They are green or brown in colour. The African mantis has whitish spots or stripes in the anterior part or the flank of the abdomen on each side of the fore wing. It has a very mobile triangular head that can turn 180° and large compound eyes set up in the head’s corners, with a visual range of 2–15 m.

The binocular vision enables them to judge distance to prey and strike with great speed and accuracy. The prothorax, first part of the thorax section between the head and the abdomen, is very elongated and narrow. Females and males can be distinguished based on the number of abdominal segments – females have six and males have eight abdominal segments. Nymphs lack wings and curl the abdomen over the body. The colouration and pattern in nymphs is very different from adults and they are often mistaken for ants during early stages of development.

The common name ‘African mantis’ refers to many species native to Africa, including S. viridis, S. belachowski, S centralis, S. gastrica and S. lineola, as well as to the African twig, grass and bark mantises. Most of these occur in South Africa.

Praying mantises are protectively coloured (camouflaged); thus similar in colour to the plants they live on. Mantises inhabit almost all types of undisturbed vegetation. They can be found in grasslands where other insects that are prey live. They are found in the foliage of trees, branches in domestic gardens and in households.

They are ambush predators that feed on a variety of insects, including crickets, flies, grasshoppers and moths. Larger species prey on frogs, lizards, fish and even rodents. When they are about to feed, praying mantises lie in wait with the raptorial fore legs raised. However, in some instances, praying mantises would feed on one another. Bats, spiders and birds feed on flying adults of praying mantis, and predatory aquatic insects feed on larvae and pupae.

Females are larger than males and during mating it is best for males to be on top of females to avoid sexual cannibalism. In sexual cannibalism, when both sexes are facing each other during copulation, the female tends to feed off the male’s head; a female may eat a male’s head during or after mating. However, copulation is not disturbed; the male survives and completes copulation. The ability of the male to complete copulation is due to strong copulatory reflexes.

The development of common green mantises consist of three developmental stages: eggs, nymphs and adult stage; which is referred to as incomplete metamorphosis. The female lays its eggs on a leaf or branch or on the ground. The eggs are encased in a soft, foamy ootheca – a protective case of eggs containing 10–400 eggs. The egg case is boat shaped and made of a series of vertical chambers, where each chamber contains a single egg. It protects the eggs during harsh conditions. The eggs hatch during spring since warmth expedites the hatching.

The nymphs dispatch and immediately start hunting so as to avoid cannibalism. Nymphs do not resemble their parents and can be mistaken for ants during early stages. The African mantis, like other mantis Orders, have a life span of about twelve months. As they grow they go through 30 moults until they reach their full size. It is thought that before each moult they become sluggish and do not feed on anything. This is the phase they are most vulnerable to predators since each shedding of the exoskeleton can take a few hours to complete.

The African mantises play a vital role in biological control research. They can be seen as a species that plays a role in the biological cycles of balancing nature.

The Order Mantodea is the largest group of praying mantises. The genus Sphodromantis is well known and the most common. They are part of the food chain as they are both prey and predator.

They use the raptorial legs to defend themselves and to capture prey. The spines on the femur and tibia enmesh to trap prey. They have an elongated prothorax and elongated fore coxae to allow them to reach distant prey. However, the large bulging eyes enable them to judge distance of prey and therefore strike with great speed and accuracy. All species are ambush predators; they wait for prey on vegetation or habitats. The African mantis is highly cryptic; it mimics leaves, flowers, grass and bark that blend in with its own body colour.

Other groups of praying mantises use pink or white flowers that will blend with their body colour. The African mantis may change colour to blend with the black landscape after fires. The mantis raises its body; spreads its wings and forelegs to display threat as a mechanism of an anti-predatory behaviour. They also lunge and attack with their forelegs.

Praying mantis are important natural enemies of other insects. Some have been introduced in other parts of Africa to control crop pests, as means of biological control. They are also good garden predators.

The African mantis is a solitary and diurnal insect. They are not often seen interacting with humans, although other species are sometimes kept as pets. In the African culture it is believed that when the praying mantis is seen in a household, it is an indication of the presence of ancestors or a symbol of good luck.

They are closely related to termites and cockroaches due to similarities in reproductive structures – eggs that are deposited in oothecae. The have similar DNA sequences and gut morphology. These characters arose during the Jurassic era and radiated during the Tertiary period. Praying mantises are often mistaken for stick or leaf insects and Mantophasmatidae (gladiators, mantophasmids, mantos).

According to the Catalogue of Life and the Mantodea Species File (MSF), Sphodromantis gastrica Stål, 1858 is common and widespread. The only major threat to their population is habitat destruction.