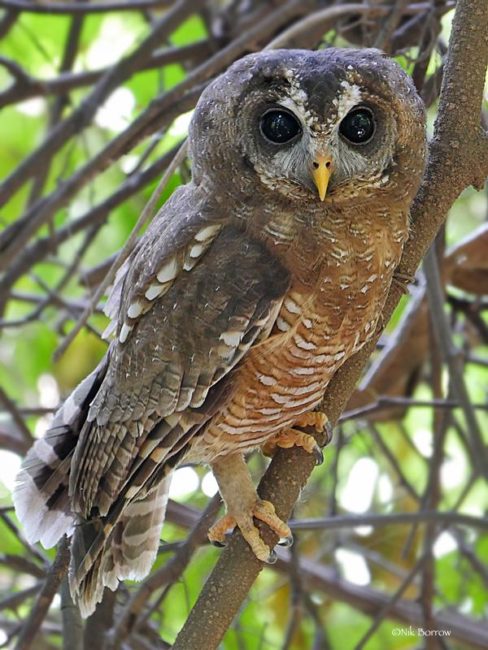 Derivation of scientific name:
The African Wood Owl and a number of Neotropical owl species were previously placed in the genus Ciccaba, but due to their close relatedness to species of the genus Strix, they have now been included in the genus Strix (Claus et al. 1999). The Latin name Strix referred to a legendary vamparic owl-monster believed to suck the blood of infants (Jobling 2010). Strix woodfordii (African Wood Owl) took its name from a British soldier of the Napoleonic Wars who was also a naturalist, Colonel E.J.A. Woodford (Rael 2005).

The African Wood Owl is the most common owl in the woodlands and forests throughout sub-Saharan Africa.

Description/How to recognize a……..
The African wood owl is medium sized at about 33 cm in height and weighs approximately 290 g, with the males and females being alike (Chittenden et al. 2016). Although there is individual variation in coloration from chocolate to buffy-rufous, the African Wood Owl generally has a pale rufous facial disc with fine grey barring, white eyebrows, dark-rimmed eyes, a dark rufous upper part and it lacks ear tuffs (Hockey et al. 2005, Chittenden et al. 2016).

The tail and the flight feathers are barred pale and dark brown, the underpart is barred russet, dark brown and off white (Hockey et al. 2005). The bill and cere are yellow, the legs are pale buff, barred pale dusky brown and feathered to the toes with yellow feet (Hockey et al. 2005). The juveniles fledges with pale rufous down (soft feathers found under the tougher exterior feathers of a bird), which is retained for up to five months (Chittenden et al. 2016).

Getting around
Little is known about the movement of the African Wood Owl except that it is mostly sedentary, although the juveniles are believed to be dispersive as they do not remain in the parental territory forever (Kemp & Calburn 1987).

Communicating
The African Wood Owl emerges after dark and usually calls soon thereafter, the calling continues for long periods and at intervals throughout the night, especially in summer (Hockey et al. 2005). The call of the African Wood Owl is a rhythmic series of hoots (who-who, who-who-who, who-are-you) and the calls often alternate between sexes, when the young ones beg, they give a short wheezing call (Steyn 1982).

Distribution
The African Wood Owl is found in forested habitats up to 2 100 m2 throughout sub-Saharan Africa (Fabian 1973). It is found in large parts of Africa, including Namibia, Botswana, Zimbabwe, Mozambique, eSwatini and South Africa (KwaZulu-Natal, patchily west to Cape Town and Cederberg, W Cape) (Malan & Steele 1994, Mendelsohn 1997). The range of this species has expanded into well-wooded suburban areas close to indigenous forests (Chittenden et al. 2016).

SEX and LIFE CYCLES
Sex:
The African Wool Owl is monogamous and each pair occupies a territory (Scott 1980; Steyn 1982; Steyn 1984; Steyn & Myburgh 1991; Steyn & Scott 1973) in extensive forests or along large rivers, and these territories may be contiguous (Hockey et al. 2005). Mate fidelity is believed to be high (Steyn 1982) and the African Wood Owl usually nests in a natural tree hole with a side or top entrance (Hockey et al. 2005, Chittenden et al. 2016). The dates for laying eggs differ depending on locality.

In South Africa, one to two eggs are laid between July and October (Kemp & Calburn 1987), with two eggs often reported (Lepage 1999). Incubation takes about 31 days (Steyn 1982). After hatching, the nestlings stays in the nest for 30 to 37 days, juveniles (fledglings) then spend about three weeks hiding in vegetation close to parents until they fly well after about 46 days (Harvey 1977). It take about 14 days for the female to lay other eggs if a clutch is lost (Scott 1986).

Friends and foes
Most owl species including the African Wood Owl watch over their young closely, but because they are hunters, they often leave the owlets unattended, making them vulnerable to predators such as cats and dogs and other birds of prey (animals.mom.me 2018). The predators, however, are quite careful when approaching the owl’s nests, because owls can easily kill four-footed attackers, and will not hesitate to do so when protecting their young. Although owls are formidable birds of prey, other strong birds of prey such as eagles and hawks attack owls (animals.mom.me 2018).

Smart strategies
The African Wood Owl is one of those species of birds that are incredibly good at camouflaging and therefore are extremely efficient in hiding from predators and prey, especially in the daytime when they are mostly inactive (www.boredpanda.com 2018). During hunting, the owl’s wings are silent so as to catch the prey by surprise and because they mostly hunt at night, this is also a good technique used to capture prey with ease.

Poorer world without me
Owls, including the African Wood Owl, feed on small rodents in agricultural areas, and thus control the rodent population, which might otherwise eat crops in the field or in storage. Owls are also widely sought out by bird watchers who highly values sightings of these elusive and mysterious predators (http://science.jrank.org 2018).

People & I
All owls, including the African Wood Owl, have been linked with death, evil and other superstitions from ancient times, and many cultures believes owls are a sign of death, having reported to have predicted the death of Julius Caesar (www.mentalfloss.com 2018; www.quora.com 2018). They have also been associated with witches and other so-called evil beings. Many cultures unfortunately still have these superstitions about owls and in some places owls are killed based on these beliefs. In many other cultures, owls represent wisdom and knowledge because their nocturnal vigilance is associated with that of the studious scholar or wise elder (www.mentalfloss.com 2018; www.quora.com 2018).

The population size has not been quantified, although it is not believed to approach the thresholds for Vulnerable under the population size criterion (< 10 000 mature individuals with a continuing decline estimated to be > 10% in ten years or three generations, or with a specified population structure). For the above mentioned reasons the species is evaluated as Least Concern (www.iucnredlist.org 2016).

As the African Wood Owl is completely dependent on forest and woodland habitat, it is very susceptible to deforestation (www.iucnredlist.org 2016).

RELATIVES
The African wood owl belongs to the family Strigidae and this family constitutes species of a group informally known as the ‘true owls’. The family Strigidae comprises of about 25 genera (Cholewiak 2003), which consists of 17 species (Giniri 2017) including Strix woodfordii (African Wood Owl) and the species in the genus Strix are generally known as the Wood owls.