Skip to content
Home » Animal of the week » Agar animal 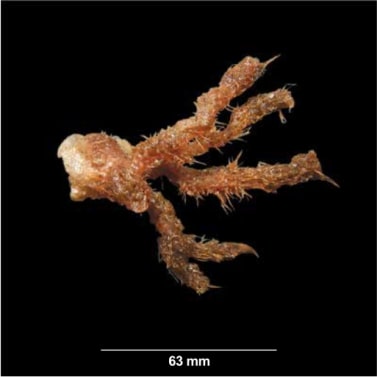 The animal has a disc-shaped cephalic shield (hard structure covering the head region) that protects its ventral mouth, giving it the name Cephalodiscus, or ‘disc-head’.

The agar animal, Cephalodiscus gilchristi, is a deep sea tube-worm that produces one of the most powerful anti-cancer compounds ever tested against leukaemia called Cephalostatin 1.

Each individual worm of an agar animal is called a zooid (Fig. 1). The zooids form colonies that live in a series of branched tubes connected at a base. The base also serves as the animal’s mechanism of attachment to its rocky substrate. They are commonly found attached to lace animals or sponges. Tubes are red-orange to brown in colour (Fig. 2) and made of collagen protein secreted by special glands of the zooids. Adult agar animals have spines on the branched tubes and a smooth base. Individual zooids are small – only about 5 mm in length – and live and move independently inside the tube structure. Zooids have a plump body with a ring of ciliated (hairy) arms on the dorsal side of the neck collar, and a cephalic shield (disc-shaped structure) towards the ventral side of the collar, which conceals the mouth (Fig. 3). The body is attached to a trunk, which houses the gonads and a posterior stalk with buds at the end. The largest recorded specimen of C. gilchristi was 190 mm long and 110 mm wide. 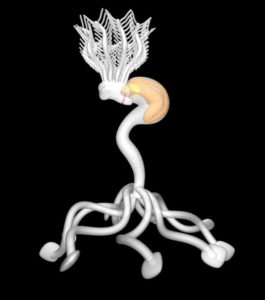 The colony of agar animals is not confined to the tubes, but rather, they are independent and can move onto the tube surface by means of a secretion by the sucker-like proboscis of the buds. Extendable stalks of the zooids, which are attached to the wall of the tube, allow the individual to retract into the tube when needed.

The agar animal, C. gilchristi, is endemic to South Africa and are found in shallow temperate waters, up to 1 000 m depth. They occur predominantly on the south coast, although some specimens have been found on the west coast. 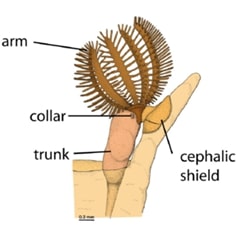 Gilchristi are benthic (on the seafloor) as adults, living in their tube network. They occur naturally on rocky surfaces (Fig. 4) on the ocean floor and are commonly found attached to bryozoans (lace animals) or sponges.

Not much is known about the diet of agar animals, but it is thought to comprise small phytoplankton given the animal’s minute size and its need to withdraw into the tube network. Filter-feeding takes place via adhesive arms around the mouth at the site of the collar (see Fig. 3). Food particles move along the arm grooves by ciliary action to the mouth. The oral muscles narrow when food is presented, and can seal completely by bringing the cephalic shield against it.

Agar animals have four different life stages – egg, planula-like larva, free-swimming sub-adult and adult. Eggs are shed into the coenecium cavity (tube cavity) where they develop. The distinctive body cavities of the adult arise in the early stages of embryonic development; however, metamorphosis through the various stages is not clear. The adults are dioecious (males and females are separate individuals), but the sexes are indistinguishable externally. The coenecium may be of one sex or a mixture of both and there are often cases where hermaphrodite individuals occur with one male and one female gonad.

Agar animals are colonial animals, living in a tube network.

The tube network in which the adult zooids spent their lives protect them from the environment and predation, and allows them access to larger areas to forage than they would have had as free-living micro-animals.

Details about the service these animals perform in the ecosystem is not currently known.

With the growing global interest in alternative medicines, marine invertebrates such as the agar animal play an important role in bio-discovery, which means exploring biological resources for industrial or commercial use. Natural compounds extracted from the South African agar animal produces one the most powerful compounds ever tested against leukemia cancer cells according to the National Cancer Institute. These compounds are called cephalostatins, and they prevent the growth of cancer cells. 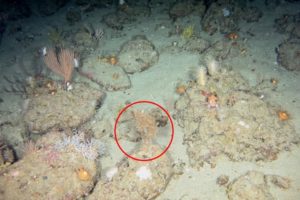 Figure 3. Typical rocky habitat of an agar animal. Note the species C. gilchristi with its outer tube structure attached to the substrate inside the red circle.
Pic: ACEP

Very little is known about this unusual animal and its conservation status is not assessed. Research is currently being undertaken to harness the natural products of this animal for the benefit of the medical industry. As it shows great potential in the medical industry, it is important to assess the population abundance of this species so that it can be preserved for the future as the bio-medical research field grows.

Approximately 100 species of hemichordate worms have been described globally and 11 of these have been recorded from South African waters. 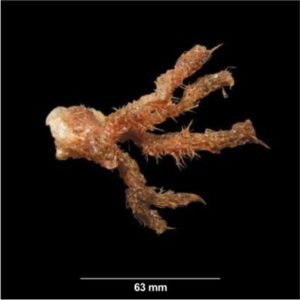