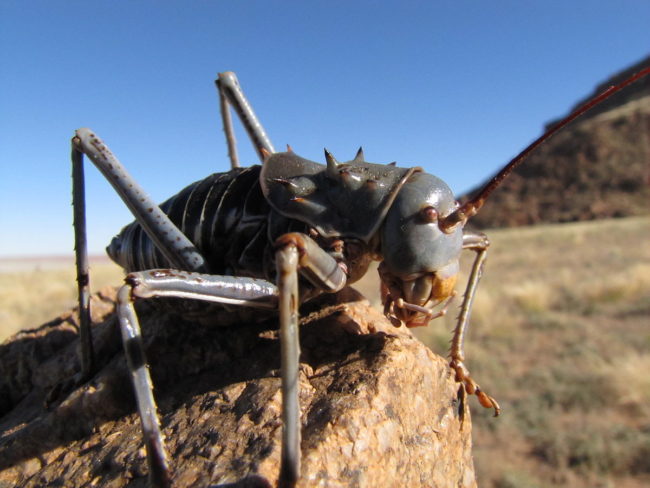 Armoured like a knight, the armoured ground cricket wears ‘armour’ of hard exoskeleton, which are covered with sharp thorny spines.

The hard, spiny exoskeleton of the armoured bush cricket’s colour comes in varying shades of brown, but some show mixtures of green, black and sometimes tones of red. The crickets grow to about 5 cm in size and have long protruding antennae and strong mandibles. Their strong armour and the strong jaw serve as a defence mechanism to deter predators. The crickets stridulate and secrete a blood-like, possibly toxic fluid called haemolymph to deter predators.

Getting around
Corn crickets adults are flightless insects and move around using their long strong legs.

Acanthoplus discoidalis make disturbance sounds when in contact with prey and rub their body parts together (stridulation) to scare predators. They also make calling sounds to attract mating partners.

The species are native and widely distributed in Namibia, Botswana, Zimbabwe and South Africa. In South Africa, armoured bush crickets are found in Limpopo and the Northern Cape.

Armoured bush crickets are found mainly in deserts and savannahs and sightings are at corn and sorghum fields during growing season. They prefer dry, arid or semi-arid habitats, where they are active during the day.

Corn crickets are omnivorous and their diet varies from leaves and crops to nestlings. They are also cannibalistic and will feed on other crickets when their diet is low in salt and protein. 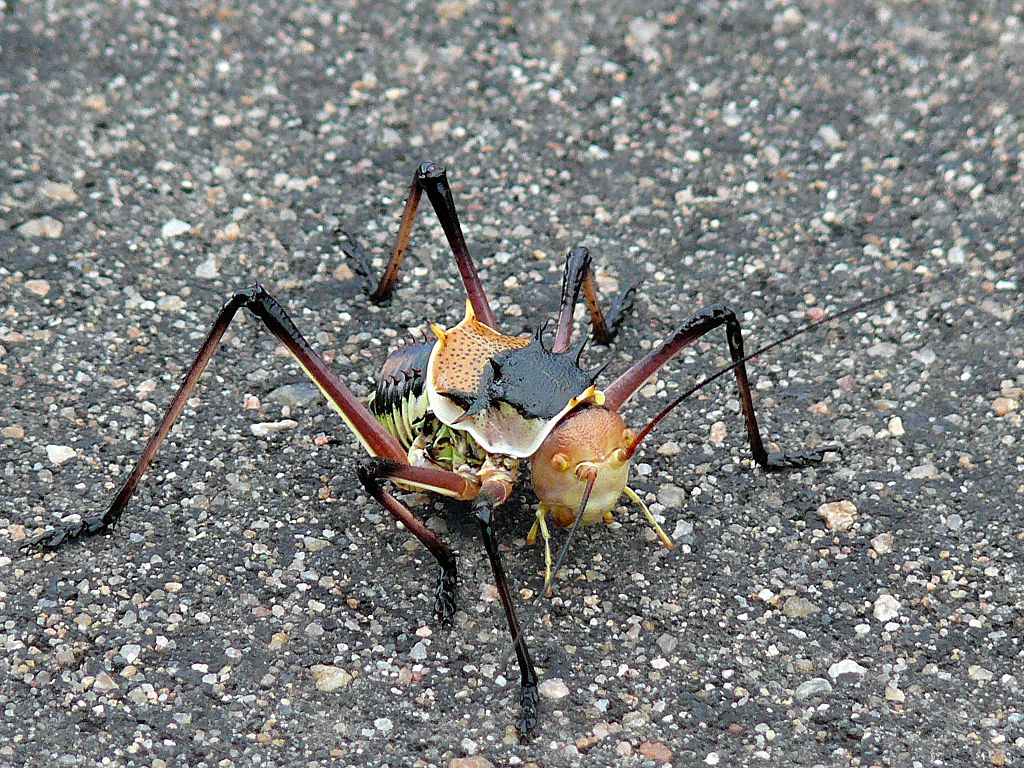 Sex and Life cycles
Sex:  The mating process is slow and females can mate every 12 hours, laying eggs in random order. Males, however, are picky and prefer mating with virgins as the process is energy intensive.

Corn crickets serve as food for many animals (mainly birds, including chickens, and reptiles) because they are large and flightless and therefore easy to catch.

As a defence mechanism, the exoskeleton and spines help to deter predators. The crickets release smelly toxins or haemolymph when attacked. To prevent being eaten by other crickets, they clean themselves up after excreting those substances.

Armoured crickets can bite humans when picked up. They are an annoying pest to corn and sorghum farmers and need to be controlled as they cause a lot of damage to the fields.

Acanthoplus discoidalis are currently listed as Least Concern on the IUCN Redlist (Last assessment done in 2013).