Skip to content
Home » Animal of the week » Black-footed cat 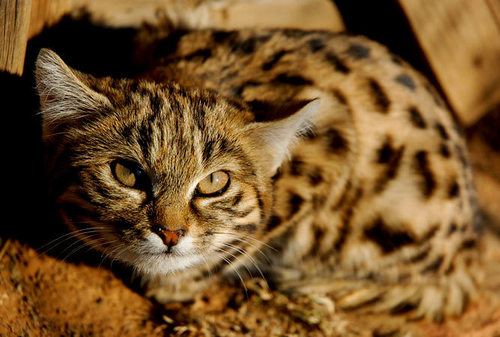 The Black-footed cat (Felis nigripes) is a solitary, secretive and nocturnal felid endemic to the south-west arid zone of southern Africa. It is the smallest wild African cat and the second smallest cat in the world.

The cat is characterized by a small stocky body, weighs approximately 2 kg and the whole-body length is 50 to 72 cm. Although the cat is shy in nature, it is still as vicious as the rest of the felid family. The black or dark brown under feet is the distinguishing feature of the cat.

Description/How to recognise the species

The two subspecies only differ in fur and marking color and have not yet been confirmed to be genetically different. Their legs have thick dark transverse stripes with dark under feet. Felis n. nigripes cat is tawny in color whereas Felis n. thomasi cat is cinnamon in color.

The cat has three throat rings, black in Felis n. nigripes or reddish brown in Felis n. thomasi and edged with rufous color. The hairs on the cat’s coat are about 25 to 30 mm long, they are grey at the base, and conform to the general color of the upper parts throughout their length except that some have white, others have dark subapical rings with white or tawny tips.

The underfur hairs are dense, fine, wavy, and shorter than guard hairs. The tail is short, narrowly black-tipped, and less than half the length of the body and head; the legs are relatively long. 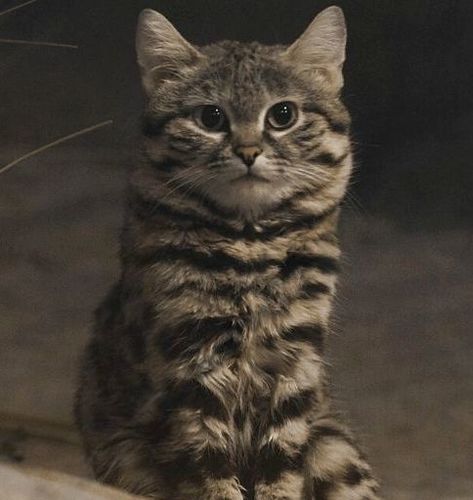 The black-footed cat is adapted to hunting in short vegetation, since it is predominantly a ground dweller and does not readily take to trees like other felids. The cat has large energy requirements (250 to 300 grams), and it would travel longer distances to actively search for food at night (4.5 to 16 km).

This little tenacious predator would either stalk or ambush prey from the back by putting its forepaws or dewclaws on the prey’s flanks. The cat employs three hunting strategies, the slow hunt, fast hunt, and sit and wait hunt. On the fast hunt, black-footed cats actively chase the prey out of vegetation.

Slow hunt involves stalking the prey at a slow speed and meandering cautiously through the grass, while being on the lookout by turning its head side to side. The ‘sit and wait hunt’ is usually done when hunting for rodents, the cat sits and wait motionlessly for prey in front of the rodent den and may sometimes even close its eyes.

Like most felids the black-footed cat is territorial, and their boundaries are always marked. Both males and females mark their territory through scent-marking, which is a form of chemo-communication. Females spray mark to inform potential males about their reproductive state and to assist their potential mates in locating them.

Spray marking is done by emitting small amounts of urine in a fine spray. This is done by lifting and vibrating the tail and simultaneously treading with the hind legs. The cats are also vocal, especially during the breeding season or when communicating with their kittens. Other forms of communication include cheek rubbing, scent rubbing and claw raking. 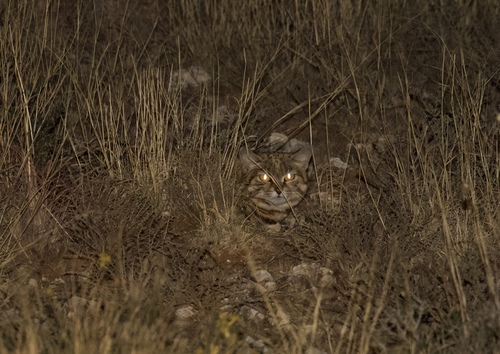 Compared to other African felid species, black-footed cats have a very restricted and fragmented distribution. Most of its distribution range occurs within the borders of South Africa, moving northward into Botswana, Namibia and Zimbabwe.

The cat is found in the southwest part of Botswana, as well as the central and southern parts of Namibia. In South Africa, the species occurs in six of the nine provinces namely Northern Cape, Gauteng, Limpopo, Eastern Cape, Northwest, and the Free State. Higher densities are found within the central part of the country.

In South Africa the Extent of Occurrence (EOO) is very high, but it is suspected that the Area of Occupancy (AOO) may be lower than expected. Population estimate studies are lacking for the species, and it is thus challenging to determine the subpopulation sizes inside and outside protected areas.

The species inhabits dry, open savannah, grasslands and Karoo semi-deserts with sparse shrub and tree cover with a mean annual rainfall of between 100 to 500 mm. The black-footed cat is endemic to the dry grassland or dwarf shrub, and savanna of the Karoo and Kalahari in southern Africa.

During the day the cat uses termite mounds or unoccupied burrows of springhare (Pedetes capensis), aardvark (Orycteropus afer), and Cape porcupine (Hystrix africaeaustralis). Additionally, they often use occupied dens of aardwolf (Proteles cristatus). The cat has a strong preference for open dens that are surrounded by short grasses and where there is high abundance of rodents or ground roosting birds.

Sexual dimorphism studies illustrate that the males and female of the species feed on different-sized prey to avoid intra-specific competition. However, males have a stable diet whilst females prey size varies with seasons.

Black-footed cats are solitary, and they are only found with other individuals of the opposite sex during the mating season or as a mother with dependent offspring. The males are polygynous in nature and can mate with up to five females and there is no paternal care. The females mature faster (7 months) than males (9 months).

In the wild, mating occurs between August-March, but in captivity it can occur any time during the year. The mating period is very short and last up to 5-10 hours. Two litters are produced yearly with one to four kittens born per litter. Kittens are born after 63 to 68 days in the dens weighing 60 to 88 grams.

The birthing season coincides with the rainy season when prey availability is high. The kittens are weaned at 2-3 months and maternal care only last 10-12 weeks after which the young become independent. The cats generally live longer in captivity (16 years) than in the wild (9 years). Only males disperse far from their natal range.

Black-footed cats are sensitive to human-wildlife conflict. The species is threatened by the indiscriminate persecution targeted to jackals (Canis mesomelas) and caracal (Caracal caracal), and the accidental deaths through poisoning activities targeted to locusts as well as illegal hunting.

The intraguild predation from blacked-back jackals, caracals, and domestic dogs (Canis familiaris) threatens the species. Other major threats include diseases, habitat loss, habitat degradation (which result in a loss of prey and a loss of den sites).

Black-footed cats cannot dig their own dens or burrows, so they rely on those made by other species. Studies indicate that black-footed cats can co-exist with other carnivores like Cape fox (Vulpes chama), through partitioning diet and activity. They also seek refuge in dens occupied by aardwolf.

The cats lead a very secretive life and hunt only at night. Black-footed cats hunt in short vegetation. Its rareness, cryptic appearance, smaller size, and secretive nature allows the species to camouflage and thrive in its environment.

During the day they spend their time hidden in dens or burrows. They also move very quickly, and do not travel on game tracks or roads like other animals.

Rodents can be agricultural and house hold pest and can carry diseases. By feeding on rodents, black-footed cats prevent the spread of diseases and act as pest control.

Black-footed cat is easily startled and flee readily but when cornered it will fight ferociously. The black-footed cat is a very courageous species, even the folklore also tells a story that the cat can bring down an animal as big as a giraffe by piercing its jugular.

The IUCN global and regional Red List Assessment has listed the species as Vulnerable under criteria C2a(i). The cat’s population is declining and there is < 10 000 mature individuals and < 1 000 individuals in any of the sub-populations. Because of the lifestyle the cat lives it is difficult to determine their population sizes, but studies indicate that the population trends are declining.

In South Africa black-footed cats are currently listed as threatened or protected species in terms of the National Environmental Management: Biodiversity Act (Act No. 10 of 2004) (NEMBA), meaning that a permit is required if a person intends to carry out any restricted activity involving black-footed cats such as keeping, hunting, catching, breeding, selling, conveying or exporting from the country.

The permit system is regulated through the Threatened or Protected Species (TOPS) Regulations (2007), which have been promulgated in terms of NEMBA. Black-footed cats are also protected under various provincial Ordinances/Acts.

The black-footed cat is one of Africa’s three endemic feline species. On a global scale, there are only 37 extant feline species. Of these, 16 are listed within the threatened IUCN global Red List categories, and of this, the 10 African species are considered Vulnerable and three are Near Threatened.

The domestic cat and wildcat are the most recently evolved species. The only known two fossil records of the black-footed cat are found in Equus Cave in Northwest province and in Malapa Hominin site in Gauteng.