Skip to content
Home » Animal of the week » Black mamba 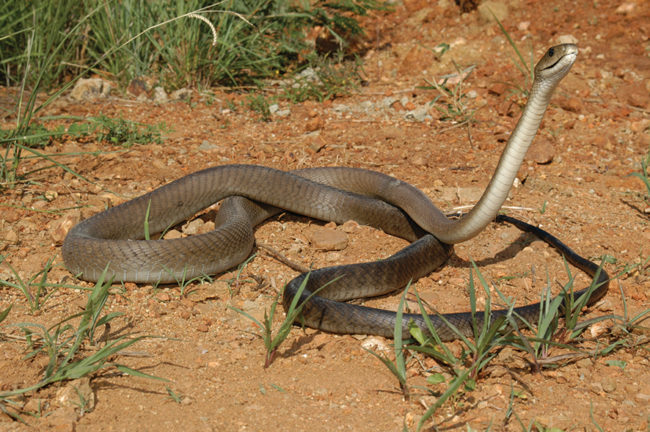 The deadliest and fastest snake in Africa! The death kisser.

How to recognize a Black mamba

Black mambas are known for their large size, quickness and extremely potent venom. They have coffin-shaped heads and are graceful, athletic snakes. Black mambas live in sub-Saharan Africa and are one of the continent’s most dangerous snakes. The average adult black mamba is 2.0–2.5 metres long, with a maximum length of 4.3 metres (14 feet). Despite its name, the snake is not black. Instead, it ranges in colour from grey to dark brown, with a lighter underside. The black actually refers to the colour of the inside of its mouth.

Black mambas are shy but aggressive, and if cornered, the snake may rear up and threaten with an open mouth and a slightly expanded or flattened neck (or hood) before striking. Black mambas can strike repeatedly, injecting its deadly neurotoxic venom which causes difficulty in breathing within half an hour. They have a specialised organ known as the vomeronasal organ, or the Jacobson’s organ, which is involved in the snake’s chemical communication and in hunting prey. The organ processes stimuli and helps the snake to detect what is in its environment and where potential prey is. They often use their eyesight, mainly for detection of motion, and sudden movements will cause them to strike. 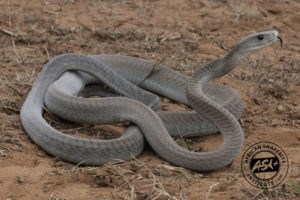 A black mamba moves using lateral undulation, which essentially involves moving in an ‘S’ shape and pushing off from objects in its path, such as trees, rocks or even piles of soil or dirt, to gain momentum. These sideways movements propel the animal throughout their environment successfully.

They have no external ears, but are quite adept at detecting vibrations from the ground. Like many snakes, when threatened, they will display aggression with a set of signals warning of the possibility of attack.

The black mamba inhabits a wide range in sub-Saharan Africa; its range includes Burkina Faso, Cameroon, Central African Republic, Democratic Republic of the Congo, South Sudan, Ethiopia, Eritrea, Somalia, Kenya, Uganda, Tanzania, Burundi, Rwanda, Mozambique, Eswatini, Malawi, Zambia, Zimbabwe, Botswana, South Africa, Namibia and Angola. The black mambas distribution in parts of West Africa has been disputed. In 1954, the black mamba was recorded in the Dakar region of Senegal. This observation, and a subsequent observation that identified a second specimen in the region in 1956, has not been confirmed and thus the snake’s distribution in this area is inconclusive.

The species is regarded as common in sub-Saharan Africa, occurrence in Senegal and Guinea has also been reported (Spawls 2010)

The black mamba is found in the northern regions of southern Africa. In South Africa, they live along the coastal regions from Kwa-Zulu Natal to Port St Johns and elsewhere, but are absent from the desert (Håkansson & Madsen 1983).

Black mambas reside in South and East African savannas, rocky hills and open woodlands. They like low, open spaces and enjoy sleeping in hollow trees, rock crevices, burrows or empty termite mounds. They are found in both tropical and temperate regions. In the temperate region they are found in the savanna, grassland and forest biomes. They also inhabit riparian zones. They are comfortable in trees but occur mostly on the ground. 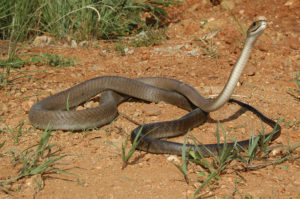 The Black Mamba is a heterotroph, as are all organisms in the kingdom Animalia, which means that it derives its nutritional requirements from complex organic substances. It is also a carnivore, meaning that it eats other animals as well as a predator, which means that it hunts and kills its food. Black mambas are diurnal snakes, which means that they will hunt during the day in order to capture its prey. They are cold-blooded and do require a significant amount of basking time in the sun to heat up their bodies. The prey of the black mamba includes a variety of organisms that include smaller mammals such as mice, squirrels, rats, and birds. They have also been found to feed on other snakes such as the forest cobra.

Black Mambas mate in the spring and/or summer. They need warm temperatures so the time frame can vary based on location. The males go to the females. They may have to fight other males along the way so their level of aggression and tension will increase during this period of time. The female’s preferences regarding males is not understood.

Once mating has taken place, the female will need the male to leave and she will become extremely aggressive if he doesn’t.

Black mambas are oviparous (producing eggs that develop and hatch outside the maternal body). Females will release the eggs into an area covered with vegetation that is warm as the eggs need heat to complete the process of incubation. She may have 10–25 eggs in her body and lay them in underground chambers. After 2–3 months the eggs hatch and the young are able to fend for themselves straight away, as the mother would have long since disappeared – straight away after laying eggs.

Only a handful of the young will reach the age of maturity. The first few days and weeks of life end quickly for most of the young because they aren’t fast enough or skilled enough to stay away from predators.

The black mamba is void of any symbioses, and so doesn’t live in close interaction with any other organisms. Its main interactions involve its prey and predators and the black mamba is near the top of the food chain in its habitat. It dominates smaller mammals and some birds. There is not much information about the lifespan of snakes in the wild. The longest recorded lifespan of a captive mamba was 11 years, but actual lifespans could be much greater (FitzSimons 1970).

Very little information is available on the ecosystem roles of black mambas. They are important in controlling rodent populations (FitzSimons 1970).

The black mamba does not live in close interaction with other animals except when the mating season begins when it will travel in search of a mate.

The presence of the Jacobson’s organ provides the snake with an advantage over its prey by enhancing its taste/smell senses. The fangs of the black mamba are front fixed, and they can be folded up into the roof of the mouth while they aren’t in use. These snakes have also evolved a hood-like structure around its neck that can flare out when threatened, this behavior makes the snake appear much larger to its enemies. Its venom is extremely potent. 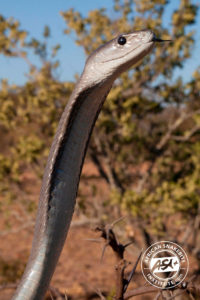 One of the more amazing adaptations that the back mamba, and all snakes for that matter, have, is the ability to move without legs! . Another recently discovered evolutionary trait that black mambas possess, which helps them move, are their scales. A study done at Georgia Institute of Technology, Atlanta in Georgia (United States) has shown that the scales on snakes have evolved to act like hooks to create more friction to help drive the snake forward.

The fear of this snake by humans has given rise to many myths among Africans about the deadly power of the snake. One such myth says that the black mamba has the ability to grab its tail, forming a loop with its body, roll down a hill and lash out and attack someone. Other myths show the mamba having exceptional intelligence, having the ability to plan attacks on humans and ambush them in cars when they reach their destinations. The other common myth is that it grows a feather on top of its head and will block the way for humans biting them on the encounter. The mythical feathered mamba is called iNdlondlo in isiZulu.

Dendroaspis polylepis has been assessed as Least Concern owing to its very large distribution throughout sub-Saharan Africa. No specific threats have been reported and this species is not undergoing significant population declines (Spawls 2010).

While black mambas are not endangered in any way, they do face a future threat due to human expansion. They are nervous animals and prefer to stay far away from humans. Human population expansion into their habitat could cause considerable habitat destruction and conflicts with human interests (FitzSimons 1970).

People who encounter the snake are encourage to move away slowly and call a professional snake handler for removal if the snake is inside any building.

Derivation of scientific name: The genus name was derived from the Latin words dendro-, meaning tree; because many of the snakes in this genus are tree-living snakes; and aspis, which comes from a word meaning ‘shield’, which is used to describe a snake coiling itself. The species name, polylepis is from the Greek words poly meaning ‘many’ and lepis meaning ‘scales’. So in English, Dendroaspis polylepis literally translates to ‘tree snake with many scales’.