Skip to content
Home » Animal of the week » Blue duiker 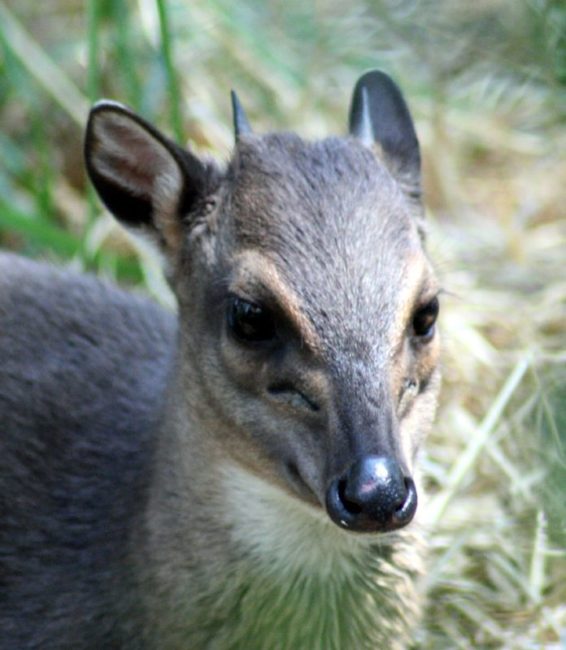 The genus name Philantomba has no known origin and the species name monticola refers to the kind habitat they prefer, derived from Latin words montis (mountain) and colo (‘I cultivate’ or ‘I inhabit’).

The blue duiker is a very small herbivorous mammal, which inhabits the thickest coastal forests in western, southern and eastern Africa. The blue duiker is a very secretive animal, their population counts and estimates are therefore difficult to establish. The species is subject to extensive hunting for bushmeat throughout its range. The genus Philantomba is believed to the oldest lineage and was the first to diverge; it is the strongest linage of the subfamily Cephalophinae.

A fun fact: the blue refers to the coloration of their hair, which appears to be blue under the forest shade and duiker is an Afrikaans word meaning ‘diver’ or ‘diving buck’, describing their behavior, which is to dive into undergrowth and disappearing into the bush when threatened or alarmed.

The blue duiker is the smallest antelope species in South Africa; their body length ranges between 55 and 80 cm, body height: 320–410 mm, and they are 13–16 mm tall at the shoulder. Females are bigger than males; males weigh around 4 kg while females weigh around 4.7 kg. Both sexes possess short, sharp horns measuring at 5 cm long hidden under short hair in females and both males and females have a 10 cm long tail. They have a light eye-brow ridge, which curves up to the base of the horns, and a glandular slit beneath their eyes. They are covered by a blue-grey coat, while underparts; inner legs and the rump of the tail are whitish.

The blue duiker is predominantly active at dawn (first appearance of light) and dusk (darker stage of twilight); they start moving around when monkeys and birds awake, and at midday they lie down and ruminate. Blue duikers use jumping and quadrupedal locomotion. They do not roam around large areas due to their relatively small size. The bonded pair patrol and defend their 2.5 to 4.0 ha of territory from other duikers, and intruders will be chased away by the pair.

Blue duikers use four senses for communication: 1) auditory (hearing), 2) visual (seeing), 3) olfactory (smell) and 4) tactile (touch). The flicking of the tail is the primary mode to communicate imminent danger. Males are known to emit a whistling or a sneezing sound to raise alarm, the young one and the mother communicate through a soft growling sound. Another mode of communication is by using scent to mark their territories and to indicate readiness for mating. Social acceptance is indicated by individuals licking each other, but mating pairs are also observed carrying out the same behaviour.

Blue duikers are widely distributed across central, western and southern Africa. The population in South Africa ranges coastally and inland from Umfolozi River System in KwaZulu-Natal to the Eastern Cape to as far as George in the Western Cape. Historically the blue duiker occurred in Hluhluwe–iMfolozi and Mkhuze areas, but they currently appear to be absent from these areas (Venter et al. 2016). The blue duiker’s distribution is restricted to the coastal provinces in South Africa, but the species has been introduced into captive-breeding systems around the country.

They are almost exclusively browsers (feed on leaves) but also feed on fresh fruits, berries, flowers and fresh forest litter on the forest floor; they also dig for tubers and roots. The species is known to feed opportunistically on bird eggs and insects, which technically makes them omnivorous, but they are predominantly herbivorous. They tend to coexist with fruit-eating birds; baboons and monkeys, and follows them around to feed on freshly fallen fruits and leaves from the activity of these animals. They are rarely observed drinking water even if it’s available because they get the water needed from the food they consume. 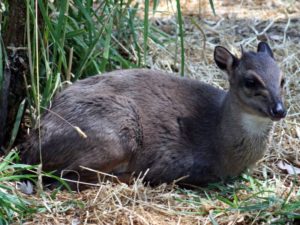 They are monogamous (they find a partner and pair for life); a pair will remain together throughout the year, spending much of the time together during their mating season. They are non-seasonal breeders, breeding occurs throughout the year. The blue duiker’s gestation period lasts 7.5 months; they produce one young per birth and twins are very rare. The young ones are hidden after birth for the first few weeks. At five months, the youngsters are weaned. Females reach their sexual maturity between 9 and 12 months and the males between 12 and 18 months. The lifespan of the blue duiker in the wild is 10–12 years, but in captivity, the oldest recorded was 16 years old.

Blue duikers have a mean of about four individuals per group, consisting of an adult male and female, one sub-adult and a juvenile. The sub-adult and the juvenile will eventually leave the territory when they reach sexual maturity to establish their territory and find mating partners.

The blue duiker is a herbivore, predominantly feeding on plants. They mutually coexist with fruit-eating animals like Cape Parrots, Samango monkeys and baboons, since they feed on the freshly fallen fruits and leaves resulting from the activities of these animals. The species is prey to a few predators namely leopard, caracal, wild dogs, hyenas, pythons, crowned eagles, baboons, crocodiles, monitors and humans. They may host external parasites and internally they host several species of nematodes. The blue duiker is hunted by humans in many parts of Africa for meat and income.

The over-exploitation of the blue duiker in some parts of Central and West Africa has been studied and documented by many researchers. Mostly this is due to non-selective hunting using snap traps. This is unsustainable and detrimental to the survival of any species. In South Africa, the legal local and international trade of live animals and the export of hunting trophies, pose a moderate to high risk to survival of the species. The recommendations from the organisations involved in the wildlife trade are that there should be intensive monitoring of the blue duiker within the protected areas to prevent illegal hunting and trade.

The blue duiker is adapted to forest thickest where they can conceal themselves from danger and predation. Their known smart strategy is to dive into the bushes and disappear whenever they are alarmed.

The blue duiker, like other mammalian species, is threatened by human-induced habitat loss, fragmentation and degradation due to urbanisation and agriculture. The extinction of the blue duiker would be detrimental to the forest dwellers across Africa since most of these tribes depend on animals like duiker for income and food. The species is prey to many small predators; their extinction would mean less prey for these predators, which may threaten their existence. This will also disrupt and cause an imbalance in the ecosystem.

The body parts of this species are used by humans, for example, horns are used for muthi and the skin for traditional outfits. The blue duiker is a very secretive species and will hide away from humans. Females are very aggressive after birth and may attack if you come to close to the new born. They are killed by farmers when invading their crops although they are not known for feeding on any crops.

The blue duiker is listed as Least Concern by the IUCN global assessment; locally it is listed as vulnerable under the C criterion (VU C1, C2a(i)). The species is listed on CITES Appendix II; it is also listed on TOPS and provincially it is listed as protected game. Throughout the African continent, the blue duiker is mainly threatened by bushmeat hunting for protein and trade. Unsustainable hunting of the species using snap traps, however, could be detrimental to the local ecosystem. In South Africa the species is threatened by legal local and international trade, hunting using dogs and illegal trade.

Reintroduction programmes are the final attempts by researchers and conservationists to maintain and restore biodiversity in the wild. The researchers agree that more research still needs to be done to facilitate successful reintroduction programmes. South Africa has established conservation organisations that are actively involved in conservation, captive breeding, utilisation, translocation and resettlement, research, training and education on small antelopes (OWG & SGBSA). These groups have identified captive breeding as one of the solutions to increase the population numbers by facilitating the reintroduction of captive-bred animals into their natural habitats. 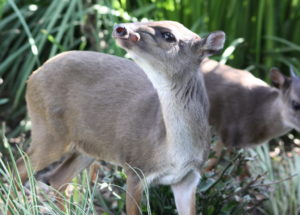 The non-detriment findings made by SANBI’s (South African National Biodiversity Institute) Scientific Authority in 2017 recommended that there should be intensive monitoring of the blue duiker within the protected areas. FreeMe Wildlife is a Non-profitable company that is permitted to provide rehab of sick and injured animals. They recently added the blue duiker reintroduction project amongst other projects they are running, collaborating with landowners and KZNWildlife. They are currently introducing the blue duiker at Dargle Forest, which used to host a healthy population of blue duikers. The organisation has released five blue duikers to the area so far and they are promising more.

The blue duiker belongs to the family Bovidae, which also includes antelopes, cattle, gazelles, goats and sheep. The genus Philantomba include Maxwell’s duiker (P. maxwelli) and Walter’s duiker (P. walteri). The species is sometimes treated as the subspecies of the red duiker; genus Cephalophus.