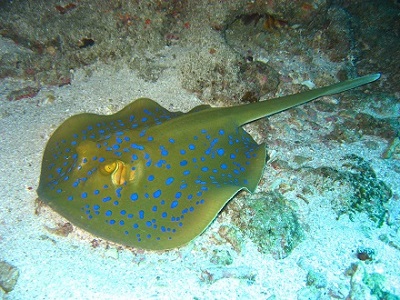 The blue-spotted ribbontail ray is a beautiful but dangerous cartilaginous fish. It has an elongated-oval, brightly blue-spotted body with a blue side stripe down its tail. Its bright colour warns its enemies of how venomous it is (Liske & Meyers 1994). This ray is sometimes confused with the bluespotted stingray (Dasyatis kuhlii), also found inshore over coral reefs. However, the bluespotted stingray can be distinguished by its more angular disc, thinner tail and fewer, less intense almost whitish-blue spots (Taylor 1997).

The blue-spotted ribbontail ray is recognised by its bright colour. It has two venomous spines, one large and one medium-sized, at the tip of the tail. The two spines are used to injure the enemy. It has bright yellow eyes that enhance its vision, enabling it to see behind it. Above each eye is a breathing spiracle (hole). (McEachran 2004).

Blue-spotted ribbontail rays mostly swim, but can also walk using their pectoral fins or limbs to move around. The pectoral fins move simultaneously during forward movement by pushing the body off the substrate and for strike feeding. They also use unilateral movements to carefully move the body to the right or left during both locomotion and prey capture. Alternating movements of the pelvic fins are similar to bipedal movements in terrestrial and semi-aquatic tetrapods (Rosenberger 2001).

The blue-spotted ribbontail ray uses electroreception (the biological ability to perceive natural electric stimuli) to communicate with other members of its species and to detect prey. They use ampullae of Lorenzini, which are special sensing organs called electroreceptors and form a network of jelly-filled pores to detect slight electrical impulses within the water (Smith et al. 2004).

Blue-spotted ribbontail rays have been recorded from southern Africa and the Red Sea to the Solomon Islands. It is found primarily in the Western Indo-Pacific. T. lymma has also been recorded in Australia in shallow tropical marine waters from Ningaloo Reef, Western Australia to Bundaberg, Queensland (Taylor 1997).

Blue-spotted ribbontail rays are found on sandy bottoms around coral reefs and are most abundant inshore. These rays like to bury themselves just underneath the sand where they feed on various invertebrates. They are usually found on shallow continental shelves and have also been observed around coral rubble and ship wreck debris at depths of 20–25 m (Sham & Azmi 2016).

Blue-spotted ribbontail rays have no teeth but the mouth has food crushing plates designed to crush their victim or prey. They capture their prey by pinning it down with its wing-like fins or by scooping up those that hide in the sand. T. lymma has very distinct feeding behaviour. During high tide, they migrate in groups into shallow sandy areas of tidal flats to feed on sand worms, shrimps, hermit crabs and small fishes. At low tide, they recede back into the ocean, usually alone to hide in the coral crevices of the reef (Bester 2009).

T. lymma is ovoviviparous. This means that the embryo is nourished by the yolk, and the eggs are retained within the female until they hatch. The ray produces about seven live young per litter. Each juvenile is born with the distinctive blue markings of its parents in miniature. The lifespan of blue-spotted ribbontail rays are still unknown (Allen 1996).

During courtship, the male often follows the female with his sensitive nose close to her cloaca (a cavity at the end of the digestive tract used to release both intestinal and genital wastes in vertebrates) in search of a chemical signal that the female will emit that indicates she is ready to mate. Courtship usually includes some sort of nibbling or biting of the disc. The teeth of the male are used to hold the female in place during copulation. The male fertilises the female via internal fertilisation through the use of their claspers. The breeding season is usually in late spring through to summer and gestation can be anywhere from 4 to 12 months (Bentley 1996).

Rays have developed very strong senses to make their lives easy in the ocean; these include hearing, smell, touch and sight as well as the ability to sense natural electric stimuli. With their eyes positioned on the top of the body it can see above itself as it lies in the sand waiting for prey. Their ears are small holes located on top of the head that house sensitive hairs that detect vibrations. They mostly rely on the sense of smell to detect food. These are adaptations, which have allowed them to survive in their environment (McEachran 2004).

In Australia, T. lymma is eaten and therefore hunted for its meat. It is also used in fisheries and for commercial purposes in aquariums (Cribb et.al. 2004).

The most dangerous predator to blue-spotted ribbontail rays are human beings. They are fished for their meat, which is either smoked and salted or dried for local markets. Their venom is very strong and can result in people becoming very ill or even dying (Ferrari & Ferrari 2002).

Although this species is very wide ranging and common, it is subject to anthropogenic activities as it intentionally captured by inshore fisheries as a result of its attractiveness for the marine aquarium fish trade. Another major threat to this species is the destruction of its coral reef habitat by use of explosives to kill fish for easy collection. They are also poisoned by farm pesticides and fertilisers running into the sea. Without a habitat in which to live, this species may be pushed to extinction along with other species of the coral reef habitat. According to the IUCN Red List of threatened species, this species is classified as Near Threatened and the population trend is unknown (IUCN 2010; Compagno, L.J.V).

This family has two different subgroups namely the Java and Bali forms. The distinct difference between the two is their size, with Bali being much larger than the Java. On the familial level, family Dasyatidae is made up of 9 genera and 70 species; in South Africa only 17 species have been found (Weigman 2016). Members of the genus of Dasyatis are called maskrays, because of the colour pattern around their eyes. The largest species of this family can grow up to 4 m (Taylor 1997).