Skip to content
Home » Animal of the week » Bont-legged tick 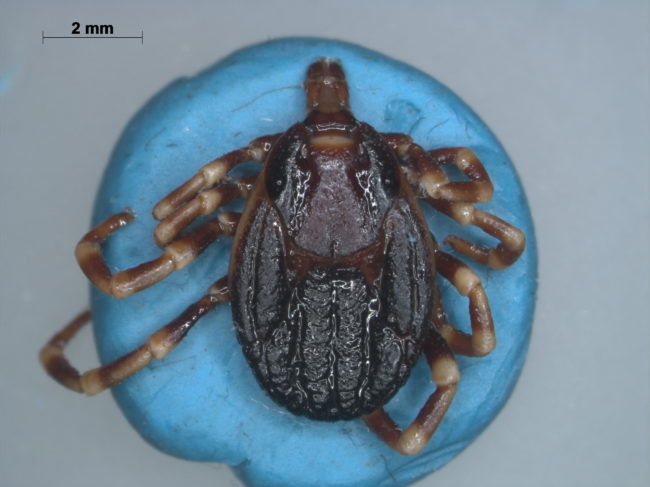 There are 25 species of bont-legged ticks in the genus Hyalomma. They have lengthy palps and hypostomes and are dark-brown or black in colour. These inornate ticks are well adapted to arid conditions, and have beady eyes and banded legs.

Getting around
Hyalomma truncatum ticks move by crawling slowly on their hosts or on vegetation. To travel longer distances, they attach themselves on their hosts species, where they will pierce the skin with their mouthparts and feed on the blood of their host, while being transported around by the host.

Communicating is done through sensing of chemical signals, which are classified into two types, namely the arrestment pheromone (arrestants) and sex pheromones.

Hyalomma truncatum is widespread in arid and semi-arid regions of eastern, central and southern Africa.

The tick is adapted to dry environments and areas of little vegetation where it lives in or around livestock housing.

They feed on blood from their hosts (including birds, cattle, sheep, goats, pigs, horses and camels).

Depending on the hosts species, Hyalomma truncatum has both two- and three-host life cycles. Domestic and wild herbivores are preferred by the tick. Hares and rodents are preferred food for immature stages. Adults may be seen in large numbers in the late summer after the rains, and immature stages can be found in the dry fall and spring months.

Hyalomma truncatum serve as food for many animals, including chickens, other birds and reptiles, as well as amphibians. Some birds such as Red-billed and Yellow-billed Oxpeckers specialise in feeding on ticks, and these birds can often be seen in association with large herbivores where they perch on the animals and pick in their ears or anywhere where they can find ticks. Hyalomma truncatum is a known disease vector – it transmits diseases of human and animals, including the Crimean-Congo Haemorrhagic Fever virus, anaplasmosis, and babesiosis.

Generally, the tick hides in woody or bushy areas to make it easy to hide themselves, making it easy to reach out with their legs and crawl onto a host.

They benefit the moist, dark ecosystems in which they live by serving as a food source for many reptiles, birds and amphibians. They also help control wild animal populations. Scientists even use them as indicators of the health and stability of ecosystems.

Hyalomma truncatum can bite humans and cause itching, pain, inflammation, redness and swelling at the site of the bite. The tick is known to transmit Crimean-Congo Haemorrhagic Fever (CCHF) virus to humans.

Hyalomma truncatum ticks are currently not listed on the IUCN Red List.

The genus Hyalomma, bont-legged ticks, comprises 25 species that have long palps and hypostomes. It is closely related to Hyalomma albiparmatum and Hyalomma  nitidum