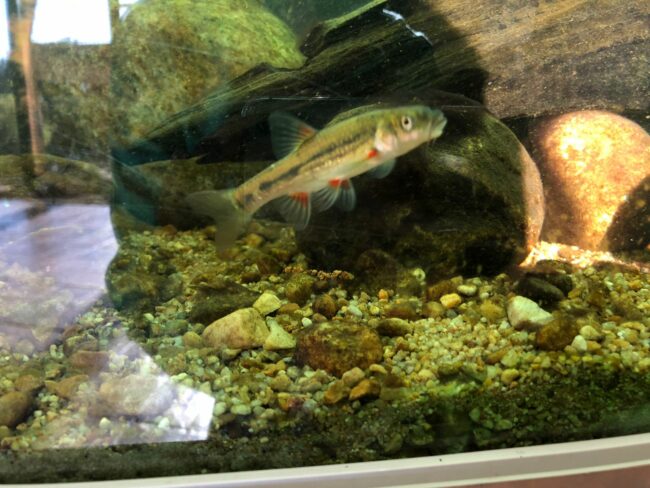 Derivation of the scientific name: Its scientific name comes from the Ancient Greek pseudos meaning false and the Latin barbus meaning beard, referring to the barbels or barbs. Pseudobarbus was described by Smith (1841) as a subgenus of Barbus. Nearly 150 years later, the subgenus was raised to full generic status.

Known for its red fins and darker spots along the midline of the body, Pseudobarbus burchelli is one of the Critically Endangered Cape Floristic Region (CFR) fishes.

How to recognise the Breede River redfin

A Breede River redfin is a small, medium-sized, pigmented riverine fish that gets its name from its red fins. Rays of the primary dorsal fin are soft and flexible, and scales are striated in a radiating pattern. It is also defined by the presence of dark spots along the midline of the body, which serve as part of the sensory organs that detect movements and vibrations. Juveniles and young adults are olive brown and tend to have scattered spots They can grow up to a maximum of 14 cm, with the females growing longer than the males. During the breeding season, the fish is characterised by tubercules on the head, bright red fins and contrasting patterning.

The Breede River redfin facilitates movement by flexing its body and moving its tail back and forth. To move forward through the water, the fish expands its muscles on one side while remaining relaxed on the other. Caudal fins are used by fish to push themselves through the water. 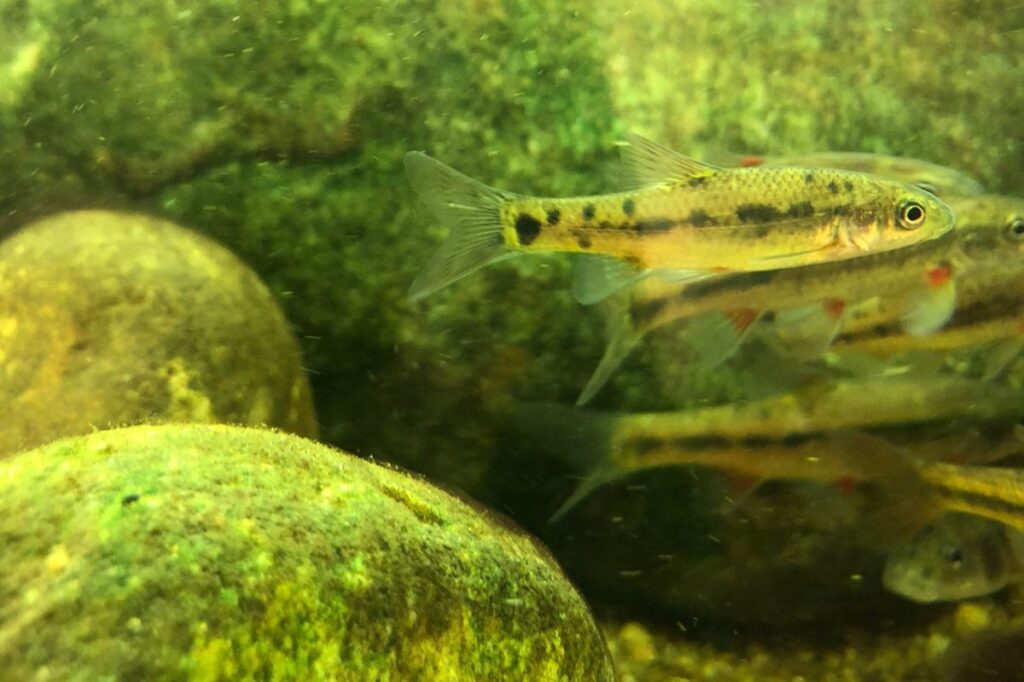 Breede River redfin populations inhabit clear, oligotrophic mountain streams, which is a typical habitat for many redfin species. The tributaries exhibit minimal mineralisation and slight suspension, providing refuge to a variety of small-bodied animals. The tributaries have a wide variety of macrohabitat types, including riffles and pools with the predominant bottom substratum being bedrock, boulders and cobbles. The Breede River redfin has been observed in such microhabitats but mostly in static pools with sand substrate.

Despite a lack of detailed studies, evidence suggests that the Breede River redfin forages around benthos and consumes an omnivorous diet. They eat small aquatic invertebrates, which are usually taken from the bottom as well as plant material such as algae and detritus.

The breeding season occurs from September to February, with the major spawning possibly occurring between December and January. During the breeding season, males display prominent tubercles indicating that it is associated with reproductive function. Breede River redfin is a relatively short-lived species with females growing to a slightly larger adult size than males.

The Breede River redfin is known to be a gregarious species. The juveniles occur in large groups forming large shoals, but as they approach adulthood, they tend to form smaller groups and begin defending their territories.

It’s known that Breede River redfin interact with other fish species from the Cape Floristic Region, such as Sandelia capensis, Galaxias zebratus and Pseudobarbus skeltoni. The species can coexist due to resource partitioning and the occupation of different microhabitats.

The International Union for Conservation of Nature (IUCN) lists Breede River redfin as Critically Endangered, mainly due to predation from alien fish species, such as largemouth bass (Micropterus salmoides) and banded tilapia (Tilapia sparrmanii). Other habitat degradation activities, such as water extraction, bulldozing of riverbeds and excess nutrients from agricultural activities, contribute to the decline of the species.