Skip to content
Home » Animal of the week » Brown locust 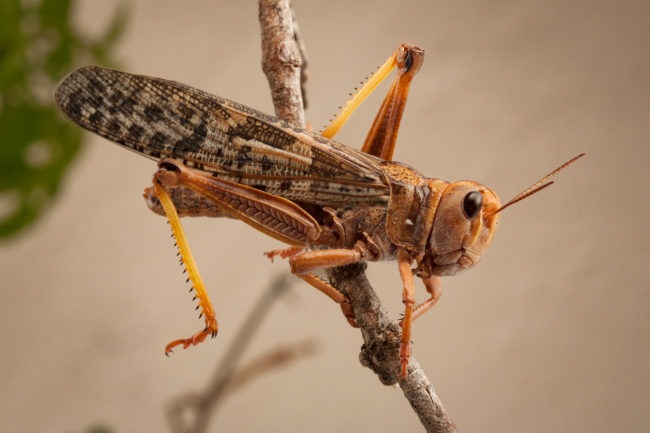 Locusts are grasshoppers that are able to exist in either a solitary or gregarious phase. The gregarious phase lives in swarms, are able to migrate over large areas and may even darken the sky in this stage. Brown locust is an agricultural pest in southern Africa, with its populations reaching plaque proportions (Todd et al. 2012). It is known to cause significant damage to crops and pastures in parts of southern Africa, including Namibia, Botswana, Zimbabwe and South Africa, where the main outbreaks area are in the semi-arid Karoo region (Todd et al. 2002; Khambule 2010; Bam et al. 2020).

The brown locust is a medium-sized insect in a monotypic genus Locustana. It is characterised by classic gregarious behavior with a discontinuous genetic variation resulting in the occurrence of several different forms on crowding. The two known forms of the brown locust include the gregaria or migratory form, which is the larger form with a body length of 41–51 mm, changing colour from yellowish grey to yellow when sexually mature. The solitary form is smaller (solitaria) with a body length of about 26–36 mm. Adults are green, mottled with brown and black (Picker et al. 2012).

These are the breathing holes, as these animals generally lack lungs. It has fine tubes that branch in all directions through its body, and air is drawn into these through the holes in its sides. Wings are very long, covered in black spots from about halfway along their length to the transparent tip, hind wings are pale blue. This species have black and orange nymphs (hoppers) that at times aggregate in bands (Tilch & Hanrahan 2000). 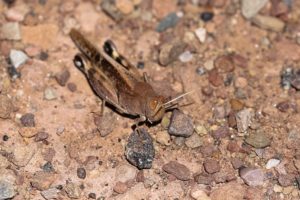 Getting around
Grasshoppers usually moves by walking or jumping, but most adults fly. Their adaptations for movement include the forewings (called tegmina), which are thickened and with numerous veins; the hind wings also contain many veins but are membranous, fanlike, and folded when in repose. Their hind pair of legs is large and strong, and modified for jumping (Gibb et al. 2012). The brown locusts have a peculiar manner of flight, which is almost always soaring upwards and then dipping and swerve before settling down (Uvarov 1921).

The male locust makes a chirping sound by rubbing its hind legs against its wings.

The brown locust is native to the semi-arid Karoo, which includes parts of South Africa and Namibia. However, the locusts are known to infest all areas that are south of 16°C (Le Gall et al. 2019).

The brown locust habitat includes areas of short grasses with bare grounds used for basking in the sun and enough wet or dry soils in which to lay eggs (Lea 1962). Uvarov (1921) reported that the breeding sites for the brown locust, especially the swarms, are parts of South Africa, like the southwestern corner of the Free State where the rainfall is slight and the veld consists of short grass mixed with short Karroo bush (Pentzia). The solitary grasshoppers are found in the veld where there is an outcrop of white limestone in the red sand.

In courtship, the male grasshopper makes a chirping sound by rubbing its hind legs against its wings to attract females. These sounds are species-specific. During mating males deposit the sperm into the vagina of the female (Gibb et al. 2006; Picker et al. 2012).

Females have an egg-laying tube which is short and usually concealed, as are the male genitalia, and the abdomen in males always turns up at the end during mating. Eggs are laid in groups in soil and mixed with a frothy substance that hardens to form the egg pod (Picker et al. 2012).

The brown locust may produce up to three generations in seasons where there is an abundance of rain, while during droughts the eggs remain dormant for up to 15 months. Laying eggs takes place in well-drained, loose soil and the eggs hatch after 10–20 days; sometimes there is a 1–3 month period of suspended development (diapause). Both diapause and non-diapause eggs can be laid in the same pod but generally solitary grasshoppers are more likely to lay eggs that are diapause than gregarious locusts. They can lay up to five pods but the average is two; each pod contains 10–82 eggs (New Zealand Digital Library 2020).

Solitary hoppers (nymphs) can be brown, green or grey; gregarious hoppers are black with orange markings in the later instars. Development periods vary from 21 to 38 days for solitary hoppers. Gregarious hoppers take longer, at least 42 days, because they are significantly larger than the other phase. The size difference between the two phases is greater than in any other species of locusts (Khambule 2010).

In the Karoo, brown locusts overwinter in the egg stage (1–3 months). Hatching begins in September after the first rains and continues in October with fledging in December. In years of good rainfall further laying can occur in January to produce a second generation in March; this generation in turn can lay again, probably in April (Khambuke 2010).

Family life:  The species exists in two forms. The fully gregarious adult brown hoppers are extremely active, flying both day and night and laying only non-diapause eggs in vast egg beds, which may hatch to cause major swarms. True solitary forms of the brown locust are relatively sedentary and only undertake night flights. They do not form swarms and are thought to only lay diapause eggs. These eggs accumulate on the soil in a stage of dormancy and only hatch after adequate rainfall, causing unexpected swarms. The eggs of the species are able to survive repeated unexpected dehydration and rehydration (Khambule 2010). 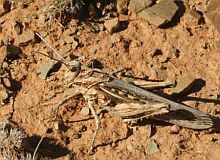 The brown locust has a potential of being an indicator species for natural, anthropological, local and global environmental changes. In South Africa, the records of outbreaks dates back to 1797 and these are used to study environmental change patterns in time and space. The analyses of these records indicated that brown locust outbreaks track large-scale exogenous phenomena such as climatic variations (Henschel 2015).

The species is one of the known agricultural pests in South Africa, attacking mainly cereals and pastures. The South African Government spent millions of Rands to control the infestations of the Brown Locust over the years. For example, the major outbreak in 1985–1986 cost the country about R50-million for chemicals and labour for controlling these locusts.

Successes of these initiatives were reported, which was the ability to limit the true swarming phase with extensive migrations in recent years, but the outbreaks have also been recorded more frequent than in other locusts and the non-swarming outbreaks last for 7–11 years (Henschel 2015; Le Gall et al. 2019).

In South Africa, strides have been made in controlling the outbreaks of these locusts. However, there is a lack of research on the impacts of the application of insecticides to human health and livestock as well as risks to the environment in terms of pollution and ecosystem benefits in terrestrial as well as aquatic ecosystems. There is an exception of a study by Stewart (1988) who reported that the non-target grasshopper populations decreased following the application of chemicals used for brown locust control in the Karoo.

Locusts are prey to nomadic birds, mammals, reptiles, arachnids and other insects. The fluctuations of the locust populations change the predator food–webs dynamics. In times when there are not locust eruptions, the resident predator populations also decline, however, they are sustained by grasshoppers in solitaria still available, as well as by other insects, in particular harvester termites, Hodotermes mossambicus, which populations increase during locust population declines and vice versa (Erasmus 1988). The harvester termites feed on leaf litter and dry grass (Bissett et al. 2019).

The brown locust withstand arid conditions of the Karoo with a number of strategies. The eggs have an impermeable cuticle, are drought resistant and may live in the soil for about three years. Diapause eggs prevent immediate hatching, allowing the build-up of eggs in the soil over a period of time. These eggs only hatch when the moisture content of the soil is suitable. For a period of about 9 to 40 days, the eggs remain in diapause, once diapause is completed eggs may enter a stage of quiescence (dormancy), which can last for several years. Once the conditions are favorable, such as after heavy rains, the hatching cause outbreaks of locust swarms enabling them to migrate to alternative breeding sites.

Additionally, the foam covering an egg pod is reinforced with soil particles forming a hard case protecting eggs against compression and desiccation. This foam allows gaseous exchange between egg mass and the soil surface and is used also as an escape route during hatching. The brown locust has a relatively thicker and stronger froth plug than Locusta migratoria migratorioides and Schistocerca gregaria (Kambule 2010). 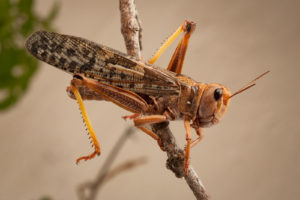 Why do these grasshoppers form swarms?

The gregarious phase in locusts is strategy born out of desperation and driven by hunger and swarming is a response to find new pastures for feeding (Anstey et al. 2009). Additionally, the gregarious locusts were reported to have high levels of serotonin in their bodies (Guo et al. 2013), which regulates moods and social behavior, appetite and digestion, sleep, memory, sexual desire and depression in humans.

Grasshoppers and locusts are both component of heathy and disturbed grassland ecosystems. The insects are abundant in natural and human-altered habitats like rangelands, wetlands, agricultural fields and lawns. They are known to stimulate plant growth, participate in nutrient cycling and play an important role in food chains. Some grasshoppers are proposed as ecological indicators of ecosystem quality and efficacy of ecological networks (Bazelet 2011; Latchininsky et al. 2011).

Conservation and what the future holds

These locusts are pests of agricultural landscapes and are not threatened in South Africa. The country has succeeded in managing the locust outbreaks in some respect, but the challenge lies in the changing climate, which might promote outbreaks. The country would benefit greatly from detailed studies focusing on understanding the impact of land use change, climate change and other global change challenges in relation to brown locust