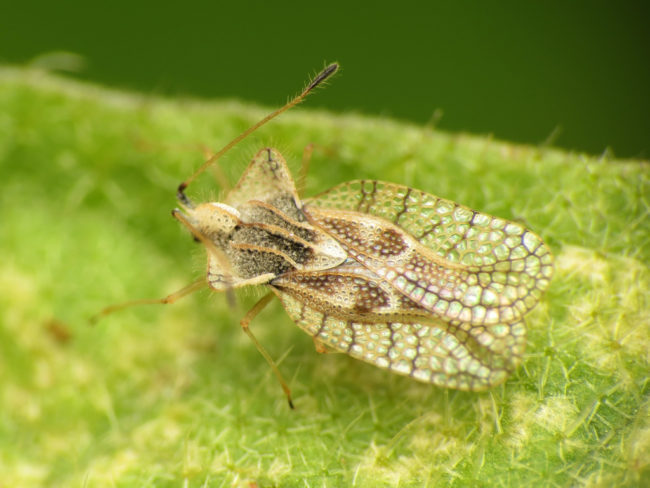 Gargaphia decoris, the bugweed lace bug, is originally from Brazil and Argentina in South America. The bugweed lace bug is host specific to Solanum mauritianum (Solanaceae) Scop, also known as bugweed, a perennial shrub, which also originates from South America. The common name of G. decoris suggests a special association between the bug and the plant; this is called host specificity. It occurs when an insect will only feed and develop (complete its life cycle) on a specific plant.

All lace bugs are known to be host specific, with a few exceptions. Host specificity has contributed greatly to the preference of bugweed lace bug’s use as a biocontrol agent for the control of bugweed infestations in several countries where it is invasive, without having negative impacts on native flora.

The bugweed lace bug is pale brown. Members of the Tingidae family are well known for poor colouration, generally varying in shades of brown. Tingidae bugs are called lace bugs because of the lace aspect of their wings. The bugweed lace bug can be identified by two black bars on their transparent lace-like wings.

The bugweed lace bug is small, it grows to about 5 mm long. The immature stages (called nymphs) are spiny and have no wings. Nymphs in the subfamily Tinginae are known to have one pair of abdominal scent glands. 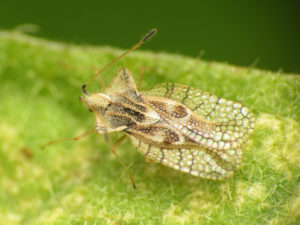 The bugweed lace bug adults can fly, however, Tingids are known for low flight activity. Tingids are also gregarious (live in groups) and sedentary (mostly inactive).

Means of communication are not known for the bugweed lace bug. However, the immature stages and adults of a close relative, Gargaphia solani Heidemann, are reported to use chemical compounds for communication and as predatory protection strategy.

The bugweed lace bug originates from southern Brazil and northeastern Argentina and it is host specific to bugweed in its native region. The native range is characterised by a subtropical climate with rainfall occurring throughout the year. It has recently established populations in New Zealand where it has been released against bugweed.

In countries where bugweed is invasive, the climatic conditions are often suitable for the establishment of the bugweed lace bug. These countries include South Africa, Madagascar, Kenya, Uganda, Eswatini, India, Sri Lanka, Australia (Queensland coastline), New Zealand North and South Island, and the USA (California).

The bugweed lace bug is mostly found in disturbed sites and pine tree plantations, where bugweed usually occurs. This seems to be the case in both the native range and in areas where it has been introduced. It has a preference for partially shaded, but not fully shaded conditions. This preference is not fully understood, but it could be driven by factors such as host plant quality, predation or temperature.

As already mentioned above, the bugweed lace bug is host specific to bugweed. Both adults and nymphs are sap-suckers, they feed on the plant sap on the under-surface of the leaf. The nymphs feed in large groups.

The reproductive behaviour in the Tingidae family is virtually unknown. Also, courtship behaviour has not been reported. As previously indicated, the bugweed lace bug completes its life cycle on bugweed trees. The adults can live for 2–3 months. Females lay eggs in batches of variable size, ranging from 34–876 eggs. In some Gargaphia species, the females are known to lay eggs on the same spot, thus forming clusters of eggs. Although not known for the bugweed lace bug, other species in the Tingidae family either insert part of their eggs in the spongy mesophyll (endophytic oviposition) or place them on the surface of the vegetal tissue (exophytic oviposition).

The eggs are laid on the under-surface of the leaf and females will guard them until they hatch and thereafter will guard the nymphs. However, as it is with most species in the Tingidae family, maternal care is rare to non-existent. In a close relative of the bugweed lace bug, Gargaphia solani Heidemann, one female takes care of eggs laid by several females until they develop to adults, and this reduces the number of females exposed to predators and therefore ensures survival of the species.

Also, nymphs of species in the Tingidae family often respond to disturbance or being scattered by quickly grouping together again. The developing nymphs feed on the underneath surface of the leaf as they develop to adults. This life cycle is repetitive during the year, resulting in several generations.

The populations are highest at the end of summer and autumn but drop radically during winter probably because of low temperatures, humidity and rainfall that contributes to reduced plant quality or prolonged development of the immature stages.

The eggs usually hatch after 9– 14days and undergo five immature stages (nymphal instars) before moulting into adults on the same plant. The egg to adult development stage takes about one month. 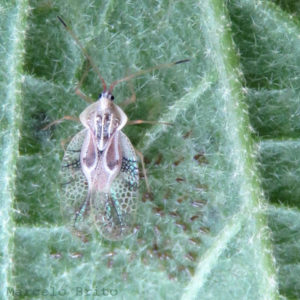 The eggs, nymphs and adults of the bugweed lace bug are prey to generalist predators such as mirids, coccinellids and formicids, and predation has been the main reason for failed establishment in field sites where it has been released for biocontrol purposes.

The bugweed lace bug is not known to coexist with other species. Laboratory and field trials have been conducted to test its association and potential impact on bugweed together with a flower-feeding weevil Anthonomus santacruzi Hustache, also a biocontrol agent for bugweed that originates from South America. However, the populations did not establish and no association was observed between the two species.

Extensive feeding by the bugweed lace bug causes the leaves to turn dry and yellow and ultimately fall before maturity. Feeding also reduces tree photosynthetic rates by removing chlorophyll, with more impact on trees growing in full sun compared to trees growing in shade, probably because of a combination of stresses including accumulated heat-light stress. It also causes a reduction in tree height, fruiting, flowering and even mortality of bugweed trees. It is for this reason that the bugweed lace bug has been used as a biocontrol agent for bugweed.

South Africa has been a global leader on the biocontrol efforts against bugweed. In 2010, New Zealand released the bugweed lace bug against bugweed, using South Africa’s experience to guide their efforts. These efforts are important because as stimulate interest in other countries where bugweed is invasive.

Nevertheless, similar to South Africa, the bugweed lace bug has not been successful at controlling bugweed invasions in New Zealand. In both countries the bugweed lace bug seems to have outbreaks that are damaging to bugweed but do not provide adequate control of the weed because population density is not sustained over long periods.

Currently, bugweed is unlikely to be controlled only by biocontrol, and therefore it has been suggested that it should be integrated with clearing programmes (cutting of stems and herbicide application). This could be ideal for areas with large infestations of bugweed, which are costly to eradicate by either biocontrol or clearing, separately.

Members of the Tingidae family are distributed worldwide, with three subfamilies: Vianaidinae, Cantacaderinae and Tinginae all represented in the Neotropical Region.

Gargaphia is a New World (belonging to the Americas) genus comprising about 70 species. The defining characters of the Gargaphia genus are not unique to the group, and therefore it has been suggested that the genus should be divided into several distinct genera.