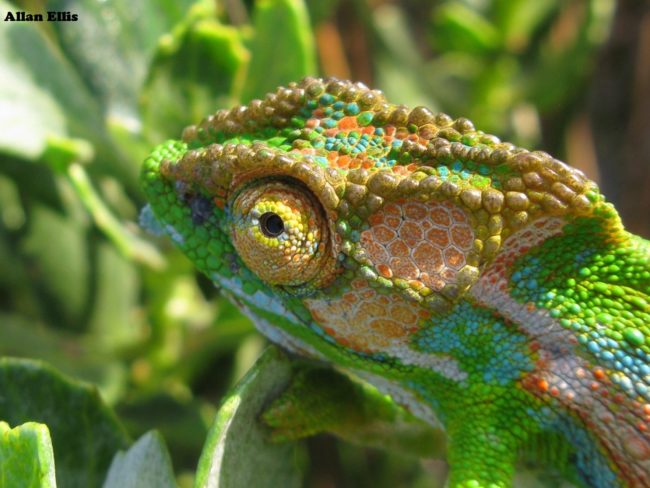 South Africa has a unique biodiversity and is home to over 350 species of reptiles; with 19 chameleon species being formally described and 80% of these species endemic to the country. The Cape dwarf chameleon is restricted to South Africa; its status is Near Threatened according to the IUCN.

Due to habitat loss and land transformation (i.e. urbanisation and agriculture, their habitats have become threatened and severely fragmented). In addition to this loss climate change could have another catastrophic effect by reducing its range. 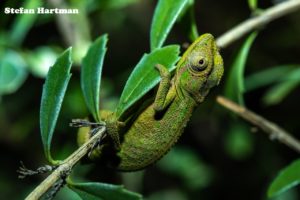 Adult Cape dwarf chameleons have a variety of bright colours depending on their habitat; juveniles can be easily distinguished from adults as they have a dull coloration. Their colouration also acts as a defensive mechanism against predators (camouflage).

Sizes vary with the  adults being 45–100 mm in length (snout to tail). These chameleons turn into a darker colour to absorb heat, or change to a pale colour to reflect light to absorb less heat.

Bradypodion pumilum uses its tongue to catch prey and projects quickly in a fraction of a second to catch insects that are within its reach. They also have eyes that can move independently from each other.

Cape dwarf chameleon is only active during the day. They are very slow moving animals; with their primary mode of movement being walking and climbing and they always have at least one foot touching the surface during movement.

Their tail assists in locomotion by providing stability and balance when they move vertically through vegetation and between gap areas. 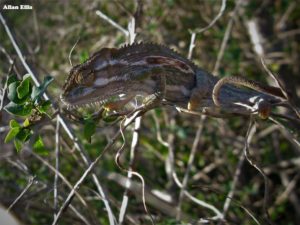 Chameleons express their moods and communicate with each other by changing their colour.

Bradypodion pumilum uses branches in trees and bushes in a variety of vegetation types within the fynbos biome (fynbos, renosterveld, thicket, riparian vegetation and forest areas), as well as in some well-vegetated gardens in towns.

Bradypodion pumilum are insectivores, having a unique foraging style classified as cruising foraging, and have small home ranges. They walk around slowly and catch prey, or they would sit and wait for prey to cross within catching distance.

They are quite accurate at catching their prey; also, their tongues are twice the length of their bodies, which increases their reach. These chameleons usually drink by licking dew or raindrops off substrates. 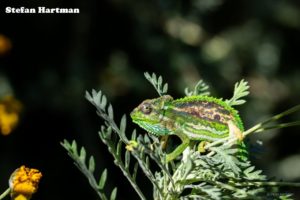 Cape dwarf chameleons are viviparous, meaning that they retain their eggs in the maternal reproductive tract until development is complete. Females give birth to between five and fifteen offspring, and the newborn babies are self-sufficient. Breeding can occur all year round.

Females reach a larger body size on average than males.

In general, these chameleons are not territorial; however they are philopatric (they tend to remain near a particular area).

They are solitary animals and avoid engaging with other chameleons in the same vicinity and do not show aggression. When one is observed by another they would move away from each other. However there are rare occasions where the encounter would escalate to a fight in which they then bite each other until one runs away.

Bradypodion pumilum are highly preyed upon by other species including spiders, snakes, birds and domestic cats.

This chameleon species moves very slowly and as they feed on prey that moves towards them, they expend very little energy during their hunt. They have great visual acuity and can remain still for long periods of time. They have a tongue that shoots out fast in order to catch moving prey.

Bradypodion pumilum tends to rely on vegetation they inhabit for camouflage due to their cryptic nature. The chameleon can also change its colour to catch its prey and trick its predators. 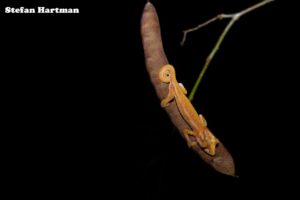 Chameleons’ role is to regulate pest and insect populations, and maintain its ecosystem as a key predator.

Bradypodion pumilum’s current status is Near Threatened on the IUCN (International Union for Conservation of Nature) Red List. National parks and provincial nature reserves protect about 40% of its habitat.

This species is under threat as it has lost significant pieces of its habitat to urbanisation and agriculture. It also occurs within the fire-prone vegetation type fynbos and too frequent fires can reduce population numbers.

Climate change over the years could have a negative impact on their suitable habitat, lifespan and distribution. The fact that these chameleons are in areas that are fragmented are causing loss of gene flow between subpopulations, which could cause a low recovery rate if anything adverse should happen.

There are seventeen species in the genus Bradypodion in South Africa and several undescribed species. Other genera within the family is Brookesia, Calumma, Kinyongia, Chamaeleo, Nadzikambia, Rhampholeon, Rieppeleon and Furcifer.

There are two viviparous lineages of chameleons within southern Africa, namely Bradypodion and the east African Chamaeleo bitaeniatus.

Derivation of scientific name: The genus is from the Greek, bradys, meaning slow and podion, which is the diminutive of podos, referring to the feet, thus the genus name means ‘slow-footed’.