Skip to content
Home » Animal of the week » Cape Parrot 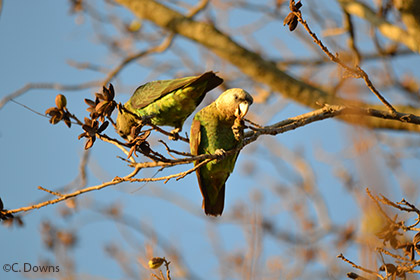 The genus name, Poicephalus, means ‘different head’. All the species in this genus have heads that are a different colour to the rest of their bodies. The species name, robustus, is Latin for ‘robust’, probably referring to its beak, which is quite hefty and allows the Cape Parrot to crack open all sorts of hard nuts and fruits; especially those of the yellowwood trees (Podocarpus spp.), which is prevalent in the Cape Parrot’s habitat. Until recently the Cape Parrot was classified as a subspecies: Poicephalus robustus robustus.

Often confused with the more widely distributed Grey-headed Parrot, the Cape Parrot is the only endemic parrot species in South Africa, with a wild population of less than 1 000 birds according to an assessment done in 2004. This bird species’ whole lifestyle is centred on yellowwood trees (Podocarpus spp.).

How to recognise a Cape Parrot

The Cape Parrot is a medium to large parrot approximately 251–349 mm in length, and weighs approximately 260–329 g. The feathers on the head, throat and neck are olive yellow to golden brown, while the body and the wings are dark green. The thighs and outer edges of the wings are orange-red and the tail and flight feathers are bottle-green to black. Females typically have an orange-red forehead, while the males have a dark-earth coloured fore crown and no coloration on the forehead. Juveniles resemble the female, but without red on the legs and wing edges.

Until recently the Cape Parrot (Poicephalus robustus robustus) was not recognised as a separate species from the Grey-headed Parrot (Poicephalus robustus fuscicollis). However, genetic work conducted by the University of KwaZulu-Natal (Coetzer et al. 2015) indicated clear genetic differentiation between P.r. robustus and the P.r. suahelicus–P.r. fuscicollis cluster, supporting previous recommendations that the Cape Parrot should be viewed as a separate species, namely P. robustus, and that the Grey-headed Parrot and Brown-necked Parrot should be grouped under the P. fuscicollis species complex as P.f. suahelicus and P.f. fuscicollis respectively.

Cape Parrots are food nomads; moving between forest patches depending on food availability. They are good flyers and regularly commute between coastal forests and inland forests. It is suggested that the Cape Parrot can fly up to 90 km in a day while foraging.

The loud and often continuous calling of the Cape Parrot makes it conspicuous. The species has a distinct vocal repertoire that includes the following five distinct calls described as ‘tzu-weee, zu-wee, zeu-wee, zz-keek and a nasal zeek’. It often calls before taking off and will call nearly continuously while flying.

The Cape Parrot only occurs in South Africa and is closely associated with yellowwood forests. The current distribution of the Cape Parrot is restricted to a mosaic of Afromontane Southern Mistbelt forests from Hogsback in the Eastern Cape through to the Balgowan and Karkloof areas of KwaZulu-Natal. Previously they were more widespread in KwaZulu-Natal, the former Transkei and the Eastern Cape, but are now locally extinct from the Afromontane Southern Mistbelt forests north of Balgowan and along the escarpment through Mpumalanga to Limpopo Province. A small fragmented subpopulation still persists in the Magoebaskloof region of Limpopo Province.

The Cape Parrot prefers Afromontane Southern Misbelt forests, which makes up a tiny portion (<0.5%) of South Africa’s land surface, but are not confined to it. There are records of Cape Parrots visiting coastal forests and/or commercial orchards and gardens during the summer months when food is scarce. Due to the continued decline in forest patches and subsequent food shortages, the birds have increasingly made use of commercial crops e.g. pecan nuts.

The yellowwood trees in these forests generally occur at altitudes between 1 000 and 1 500 m a.s.l., on steep south-facing slopes that receive frequent mist in the summer and a mean annual rainfall of > 1 000 mm. These trees are important to the Cape Parrots for breeding, feeding and social interactions. The species is a secondary cavity nester, preferring tall, dead yellowwoods as nesting sites.

The diet of the Cape Parrot is the most specialised of all the Poicephalus species studied thus far. They prefer the fruit kernels of yellowwood trees (Afrocarpus / Podocarpus spp.) when these are available, but will also feed on the kernels of other forest fruit including wild plum (Harpephyllum caffrum), white stinkwood (Celtis africana), ironwood (Oleo capensis), white pear (Apodytes dimidiata), and the exotic and invasive syringa (Melia azedarach) and black wattle (Acacia mollissima) at other times of the year.

Fruit kernels of yellowwood trees are only available from June through to November. Yellowwoods are mast fruiting and these fruiting events can be separated by long intervals of six to seven years. Due to the variable fruiting phenology of yellowwood species, the Cape parrot is considered a food nomad, moving between forest patches and occasionally making long foraging trips to coastal forests and/or visiting food sources outside of forests, including commercial orchards and gardens during the summer months when food is scarce. Foraging is concentrated in the first and last few hours of daylight.

The Cape Parrot is considered a long-lived species and can live up to 30 years in captivity. They are considered solitary, non-territorial nesters and start breeding at 4–5 years of age, only breeding in alternate years. It is a secondary cavity nester, preferring tall, dead yellowwoods called ‘snags’. Breeding occurs all year round, but usually peaks from August to February. After an incubation period of 28–30 days, the female lays an average of four eggs. Even though four eggs are laid on average, only one or two are usually hatched and fledged. Both parents attend to the nest and regurgitate food to the young, but the female seems to spend more time in the nest. The chicks fledge at 55–79 days after which they remain in groups with their parents and continue to be fed by both parents.

Flock size is rarely greater than 10 individuals and is often family groups (an adult pair with 2–4 juveniles or non-breeding birds). However, Cape Parrots roost communally in large Eucalyptus or yellowwood trees along the highest ridges and at these sites flock sizes may increase to 20–70 birds as several groups aggregate. Between periods of activity birds can be seen resting or preening. Preening includes scratching and stretching behaviour.

Cape Parrots are predispersal seed predators, feeding predominantly on the kernels of yellowwood trees, while the kernels are still unripe and hard. These kernels are unpalatable for other frugivores while still unripe. Thus these parrots can therefore exploit this food source before any other frugivores can feed on the yellowwood kernels. They are specialised to eat yellowwood kernels that are too large for most of the other birds species found in South African forests.

The Cape Parrot has a very large beak used to crack all sorts of hard nuts and fruit kernels, especially those of the yellowwood trees. The Cape parrot feeds on the yellowwood fruits while these are still green and unpalatable to other frugivorous species, giving them free access to these fruits.

Poorer world without me
The Cape Parrot is a flagship species for South African biodiversity. It is the only parrot species endemic to the country and it would be a major loss for our biodiversity if this parrot species goes extinct.

The exotic pet trade has a major influence on parrots worldwide and it is no different for the Cape Parrot. It is a sought-after bird in the local and international pet trade. Numerous breeders across the country are breeding with this species. Harvesting of Cape Parrots from the wild is, however, still a problem. This could be due to demand being higher than the supply, as the captive breeding success of these parrots is rather low. Focus should be put on establishing a completely self-sustaining captive breeding programme to supply the pet trade and thereby hopefully reduce harvesting of wild birds.

Annual censuses conducted by the Cape Parrot Working Group (CPWG) for more than 15 years indicate an estimated global population size of 1 000–1 500 individuals, representing considerably less than 500 breeding pairs. Based on 15 years of survey data the population appear to be stable. The species is listed as Endangered in the South African Red Data Book for Birds, and as Critically Endangered on the current ‘Threatened or Protected species list (section 56 of the National Environmental Management: Biodiversity Act No. 10 (NEMBA) of 2004)’. It is also protected under several provincial ordinances.

Due to the IUCN and BirdLife International not recognising the Grey-headed Parrot and Cape Parrot as two separate species, both taxa are together considered as Least Concern at an international level. While the ultimate threat to this species is habitat loss through the degradation and reduction in Afromontane Southern Mistbelt Forest, the more recent, but also significant, threats are (1) infection and mortality caused by Psittacine Beak and Feather Disease Virus (PBFDV), and (2) local poaching and trade.

Until recently the Cape Parrot (Poicephalus robustus robustus) was not recognised as a separate species from the Grey-headed Parrot (Poicephalus robustus fuscicollis). However, genetic work conducted by the University of KwaZulu-Natal (Coetzer et al. 2015) showed clear genetic differentiation between P.r. robustus and the P.r. suahelicus–P.r. fuscicollis cluster, supporting previous recommendations that the Cape Parrot should be viewed as a separate species, namely P. robustus, and that the Grey-headed Parrot and Brown-necked Parrot should be grouped under the P. fuscicollis species complex as P.f. suahelicus and P.f. fuscicollis respectively.