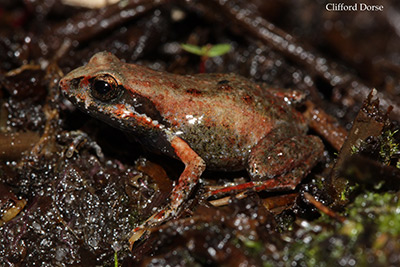 Arthroleptella is a genus of frog in the Pyxicephalidae family. All frogs in this genus are known as moss frogs.

How to recognise a Cape Peninsula moss frog

The Cape Peninsula moss frog is approximately 20–22 mm in length; adults vary considerably in colour and markings, from pale greenish brown to blue-black. Sometimes they have a dorsal stripe. The belly colour is variable, from pure white to mottled to black. They are tiny dark frogs present in abundance in wet, mossy places near streams. The gular region is black in males with fine white stippling anteriorly, and the outer metatarsal tubercle is well developed. They have no webbed toes and their pupils are horizontally elliptical.

Arthroleptella species are hard to find; not much is known about their locomotion. Tadpoles do not metamorphose in water, they squirm about on the moss until they develop into frogs; toes are without webbing and they are also able to hop out of harm’s way when exposed.

The advertisement call is a short, rapidly pulsed, insect-like chirp consisting of three pulses. The call is 0.1 s long and has an emphasised frequency of 3.1–3.4 kHz.

The species inhabits wet mossy areas associated with mountain streams and hillside seepages in the southwestern Cape. They live in leaf litter and among thick vegetation around mountain seeps or along banks. They are restricted to fynbos and Afromontane forest in the winter rainfall region, where annual rainfall is > 750 mm. The Cape Peninsula moss frog inhabits seepages, both in open fynbos and kloofs, where the vegetation is thick and the substrate is sandy or rocky. Populations of this species survive in heathland and forest, they do not survive in developed areas.

Cape Peninsula moss frogs are generalist predators; they feed on insects and other arthropods living in the leaf litter.

Breeding is usually between July and November, but they can be active throughout the year, depending on the amount of available moisture. Calling males remain well concealed in cavities in mud/moss. Eggs are not laid in water. Females approach calling males and lay clutches of ± 5–15 eggs, deposited in a jelly mass in the nest or a hollow area. Their eggs are large, unpigmented and laid in mud or damp vegetation. In this nest tadpoles will squirm around in the jelly and develop into mini froglets, barely 3–4 mm in length.

Tadpoles and froglets subsist on the yolk reserves provided in the large eggs. Development is direct and metamorphosis takes place 10–14 days after eggs are laid; towards the later stages, the froglets move out of the jelly and sit among the vegetation from where they begin to feed on small animals. The Cape Peninsula moss frog has no free swimming tadpole’s stage; they do not spend any part of their life cycle in water. Tadpoles are colourless with dark tails.

This species does not occur in synergy with any other Arthroleptella species. Some of these frogs are indistinguishable except by laboratory genetic analysis. Isolated and restricted distribution allows them to be identified from their locality.

The Cape Peninsula moss frog plays a vital role in keeping the food chain balanced. They probably have many natural predators (snakes, birds and reptiles), because of their small size, but they also depend on small insects and arthropods for sustenance.

These frogs have developed various behavioural and physiological defences to avoid being eaten. They hide beneath vegetation, soil and objects. Males make tiny nests in leaf litter at the base of the plant or in some moss, so that females can lay their eggs in a moist area that is well hidden. They rely on their cryptic nature and camouflage to escape predation; they are able to jump out of harm’s way in an instant.

In general, frogs are important to our ecosystem. Frogs have plenty of prey and predators (insects, dragonflies etc.), and they provide us with medical advances. Their tadpoles filter our drinking water and keep waterways clean by feeding on algae (filter feeders). Adult frogs eat large quantities of insects, including disease vectors that can transmit fatal illnesses to humans.

Most of our frogs require suitable habitats; they have permeable skin that can easily absorb toxic chemicals, thus making frogs susceptible to environmental disturbances and stresses. In this frogs are good bio-indicators of environmental stress. Not only can this help with monitoring their habitat, but it can also assist in other species’ habitat improvement.

Thus, the disturbance and disappearance of frog populations will affect the ecosystems and food chains.

Not much is known on people’s myths, legends and beliefs of this particular frog. There are no reports or information of this species being utilised. This species is not dangerous to humans in any way.

The Cape Peninsula moss frog’s distribution falls almost entirely within the Table Mountain National Park and known sub-populations are not severely fragmented. Major declines are not expected, and as they are relatively abundant within the range, the species is classified as Near Threatened (NT) and is not considered to be under immediate threat. However, appropriate conservation management practices are necessary to ensure its continued survival as the quality of their habitat is probably declining, which could cause the species to become endangered.

Even though its habitat is largely protected, the major threats to this species are the spread of alien species and too frequent or intense fires, which could cause extreme population fluctuations. Tourism and the alteration of drainage patterns in the area need to be properly managed to minimise impact. No conservation actions are currently prioritised for this species; however habitat and limiting factor management as well as monitoring programs to determine population trends are recommended.