Skip to content
Home » Animal of the week » Cape porcupine 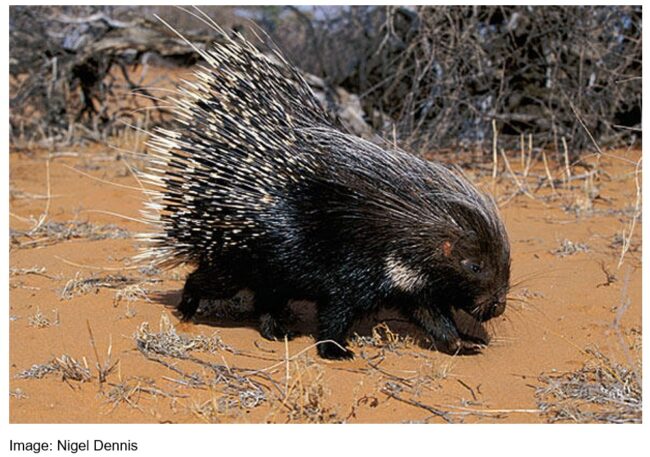 I know I walk slowly, be patient, don’t startle me because I might unleash my quills and spines on you.

Description/How to recognize a Cape porcupine

Cape porcupines, also known as Old World porcupines, are the largest rodents from the sub-genus Hystrix and are native to southern Africa. They are hystricomorphs and nocturnal (i.e., they normally rest during the day in their burrows and forage at night). Hystrix africaeaustralis is one of the species described under this sub-genus, with two named subspecies (Hystrix africaeaustralis africaeaustralis and Hystrix africaeaustralis zuluensis). Adult Cape porcupines weigh about 10.0–24.1 kg and are not sexually dimorphic, i.e., both males and females look the same. They are heavily built with short and well-bristled bodies, rather short legs, and short tails that are well hidden. Their heads are rounded with greyish brown bristled faces and stout but mobile sensory hair. They have small eyes that are situated far back on their heads. Their ears are inconspicuous and shaped like human ears.

The Cape porcupine’s body is covered with flattened bristly hairs, spines which are up to 50 cm long and stout quills that grow up to 30 cm long and erect for self-defence. The quills are banded black and white at the back and the longer quills have multiple repeating black and white bands, with up to six white sections. The tail bears a rattle of hollow rattle quills, which are circular in cross-section but are hollow and open at the end and shaped like a capsule.

Cape porcupines are monogamous and are reproductively active throughout the year. Females carry on average one litter each year during wet summer months with an interval of 365 days, and survivorship of juveniles is high irrespective of density.

Cape porcupines walk slowly and shuffle but can run quickly when necessary. They are capable of digging but cannot climb or jump.

Cape porcupines communicate in various ways depending on the situation. They communicate vociferously through piping calls, grunting and snuffing noises. They also use tactile communication through a light touch or more aggressive physical contact for mating, competition or defense, as well as a chemical communication to scent-mark their feeding areas. They communicate warning signs through stamping feet, raising quills and shaking the rattle quills on their tails.

Due to their tolerance to various habitats, Cape porcupines are widely distributed, occurring throughout the southern African sub-region with exception to extremely arid areas such as the Namib Desert in Namibia. They are found in Burundi, Kenya and in partS of southern Uganda, through Tanzania, Rwanda, southeastern Democratic Republic of Congo (DRC), in the extreme southwestern part of Congo, Angola, Zambia, Malawi and Mozambique. In the south, they are found throughout most of the southern African sub-region (South Africa, Botswana, Lesotho, Eswatini, Zimbabwe and Namibia) but absent in most central parts of Botswana.

Cape porcupines inhabit the savanna, subtropical or tropical dry shrublands and grasslands, artificial and/or terrestrial plantations, rural gardens and arable lands. They are absent from forests. Their day-time shelter is thought to include rock crevices, caves and abandoned burrows or other types of holes, which they have excavated or modified to their own requirements.

Cape porcupines are typically herbivorous, consuming mainly underground plant storage organs such as the bulbs, tubers and roots. They also feed on epigeal plant parts such as leaves, shoots, stems, tree barks and fruits. Cape porcupines are also considered generalist foragers, and they consume diverse types of food depending on their availability. For example, porcupines inhabiting natural systems such as woodlands have been observed to feed on live tissues of the inner bark of mature trees and to uproot young trees. In grassland habitats, porcupines feed on the rhizomes, bulbs and geophytes of a variety of wild plant species. Their eating habit is considered fairly destructive in the sense that they bite or dig up more vegetables storage organs than they eat. Additionally, in instances where their feeding time is not limited, they can consume about 1.5–2.7 kg of economically important agricultural crops per feeding session. Although they predominantly feed on plants, Cape porcupines have also been found to occasionally consume carrion, and they chew or nibble on bones in areas with deficient phosphorus levels – a condition called osteophagia. 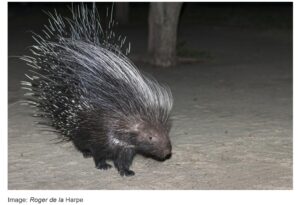 Male and female Cape porcupines are similar in size, with an estimated adult weight of 12–18 kg. They reach sexual maturity during the first or second year of their lives and actively reproduce throughout the year. Female Cape porcupines come into heat several times per year, with breeding taking place between spring and summer in South Africa. Due to the dangerous anatomy of porcupines, females initiate copulation by presenting themselves to the males for intercourse. The gestation period lasts for about three months, producing one litter per year. Their offspring, called porcupettes, are born in a litter of one to four, with an average of two in separate grass-lined birth chambers within the burrow system during summer. Females nurse their offspring for about three to four months, during which they are sexually inactive (unoestrous). After weaning, females begin cycling 2–42 days after lactation stops. They then go through 3–11 cycles lasting for about three to seven months (90–210 days) before conception and during this time the female’s cycle is normal, but do not become pregnant. The life span of Cape porcupines is approximately 10 years in the wild, while their longevity in captivity is up to 20 years.

Cape porcupines are monogamous animals and adults form basic social units comprising of either adult female and male, adult pairs and their offspring from successive litters, or an adult male and subadults or juveniles. They are generally solitary at night, but members of a social unit occasionally forage near each other in small groups or in pairs. It is probable that they are territorial within their home range.

Cape porcupines are preyed on by wild cats (leopards and lions) and hyenas for meat, however, the success rate is very low as they are not easy to attack. When disturbed by predators, Cape porcupines stand motionless and only turn aggressive when they are cornered. They often give their predators several warning signs such as stomping their feet, snorting, hissing, rattling their tails and bristling their quills. However, they will lash around and charge sideways or backwards to lodge the razor-sharp quills into the predator should they persist.

Their moonlight avoidance behavior, coupled with their ranging movements concentrated mainly in thick vegetation areas helps them to avoid predators and keep themselves fed. Their metabolic rate allows them to be active and thrive during extremely hot and cold weather, and this increases their ecological tolerance, making them adaptable to a wide range of habitats.

Cape porcupines are crucial members of a healthy ecosystem due to their positive influence on the landscapes through biotic (foraging) and abiotic (soil turnover) impacts. Their foraging is thought to contribute to the maintenance of the plant community richness by affecting plant dominance and subsequently increasing heterogeneity in the microsites. They are also considered engineers of ecosystems of their foraging habitats as their digging opens up soil surfaces, which then allows water to seep into the ground, increasing the opportunity for germination of diverse annual plants, shrubs and grasses.

Based on African mythology, porcupines are filled with species protective powers because of their formidable armor of quills. Their internal organs are burned and ground with herbs and crushed tree barks and prescribed by traditional healers as medicine to enhance strength and protection against enemies. In the Zulu culture, porcupine quills are occasionally used to make incisions on the skin when applying topical medicines.

The Care for Wild Rhino Sanctuary previously issued a report asserting that porcupines are being killed by tourists as trophies. In South Africa, these animals are hunted for food, but they are also bid on at game auctions for money.

The IUCN Red List listed Cape porcupines as a Least Concern species. Their current population trend is considered stable, although hunting pressure may threaten the extinction of this species in some areas.