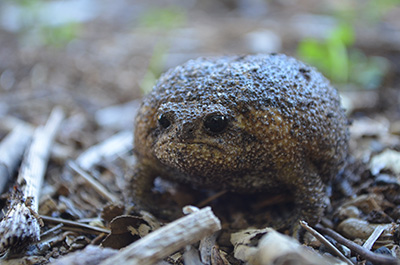 The genus name, Breviceps, means ‘short head’, while the Afrikaans common name, blaasoppie [blow-up] refers to these animals habit of inflating their bodies into a ball. This mainly happens when they are alarmed and feel threatened.

The Cape rain frog was the first African frog species to be scientifically described by Linnaeus in 1758, but it was originally named Rana gibbosa. It is the most common and largest among the rain frogs.

Cape rain frogs are generally seldom seen, except during and after heavy rains. It is believed that the rain frogs bring rain, but they are actually brought out by rainy weather. They mostly start calling before the rainy season starts, when they can occur in large numbers. This is when they start to breed and feed.

How to recognise a Cape rain frog

It has a round body with a bloated head and a snout with forward-facing eyes. The legs are shorter than the length of the body. It has coarse skin, brown and cream in colour and dotted on the belly. The males have coarser skin on their throats than the females. They have short, stubby toes that are thick and unwebbed.

The Cape rain frog is a burrowing species. When they walk, they waddle back and forth. They inflate and float in water, but are not able to swim, and can therefore drown if they can’t reach ground quickly enough.

Cape rain frogs start calling in winter just before the rains start. They produce a harsh squawking sound with short intervals during mating season. The males will call from beneath vegetation or from their burrows to indicate to females where they are.

This species is endemic to the southwestern parts of the Western Cape in South Africa, from the central Cape Peninsula in the south, to west of Citrusdal in the north.

Their diet consists of mainly worms, termites and other insects.

Sex: During mating season, males call from beneath vegetation or from their burrows so that the females can locate them. Since he is too small to get a firm grip on the female, she secretes a sticky liquid that glues him to her back. Fertilisation takes place in a burrow that the female has dug where groups of approximately 22 eggs are laid. They lay fertile eggs and jelly capsules, which provide moisture for the developing froglets. The females will remain burrowed near the eggs until they become young froglets without undergoing the tadpole stage. The adults grow up to 45 mm in length.

Cape rain frogs play a vital role in the ecosystem and in the food chain. Many predators such as lizards, snakes and bush pigs depend on them for food. They also depend on small insects for food to keep the food chain balanced.

When they are scared or angry, Cape rain frogs blow themselves up so that they seem much bigger than they actually are to a predator; hence they were given the Afrikaans common name, blaasoppie. They use this defence mechanism to their advantage by scaring off predators. As burrowing frogs, they have thick, muscular legs, which enable them to burrow for shelter. Because the males’ legs are short and do not allow them to grip the females during mating, the females produce a sticky liquid that glues the males to their backs.

As burrowing frogs, Cape rain frogs aerate the soil, which supports the easy movement of water and nutrients into the soil so that they can be absorbed by plants. This behaviour also allows for free movement by other organisms in the soil. They are also prey to a number of species that eat frogs.

A common belief regarding this animal is that it occurs when it rains or that it comes with the rain because of its common name: rain frog. Some people consider them to be some sort of prophets and indications of good luck.

The Cape rain frog’s conservation status is Near Threatened. Its habitat has been disturbed and fragmented by agricultural and urban development in much of its range. There is the possibility that they are affected by the use of pesticides and herbicides in the agricultural landscapes and this might be the reason for the decline of this species from most renosterveld fragments in the Swartland.