Skip to content
Home » Animal of the week » Cape Robin-Chat

A song-filled, perky, shy, yet curious bird that bears an orange throat and a striking white speculum, which separates the blackish lores and ear coverts from the crown. It has become one of the most familiar and easily identifiable birds in South Africa because it has adapted well to living alongside humans in their gardens.

Derivation of scientific name: There is not much literature on the derivation on the scientific name of the Cape Robin-Chat. The robin-chats were previously known as robins in southern Africa, but they are not really robins and are more closely related to flycatchers.

The name ‘robin’ comes from a colonial era where the British named almost all red or orange breasted birds after their Robin Redbreast, Erithacus rubecula. In India and Africa, the ‘robin’ is in fact a chat; in North America it is called a thrush; whereas in New Zealand and Australia robins are regarded members of the flycatcher family. The Cape Robin-Chat is called Cossypha caffra in South Africa, but it is also listed as Dessonornis caffer in some classifications. 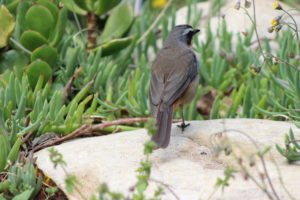 Both females and males look the same, but can be distinguished from other robin-chats by the white speculum (eyebrow), the pale orange upper breast, and grey sides to neck with greyish underparts. When in flight it shows orange tail feathers with a faded brown streak. Juveniles have heavily mottled underparts and no white eyebrows. They have black legs, which separates them from the juveniles of Chorister Robin-Chat. They have yellow soles under their feet. The Cape Robin-Chat is about the size of a house sparrow. It is around 16–17 cm from head to tail; and weighs around 25–34 g.

The Cape Robin-Chat flits about alone, hopping from perch to ground to next perch, and would often perch on branches or any prominent position. A Cape Robin-Chat will roost alone up to three metres above ground in dense vegetation cover.

The Cape Robin-Chat has a harsh, low alarm note that consists of three syllables “wa-dur-dra”. The Afrikaans name of this species, ‘JAN Frederik’ is based on the rhythm of this call if the syllables of the last part are made together. The song consists of variable short channels of musical notes that always start with low slurred whistle cherooo-weet-weet-weeeet; the singing is usually at its peek at dusk and dawn. The Cape Robin-Chat can mimic a large array of other bird species, including cuckoos, mouse birds, bulbuls, thrushes, shrikes, starlings, sunbirds, white-eyes, canaries and buntings. Some chats have been recorded mimicking the sounds of hooting cars.

The Cape Robin-Chat occurs in patches from southern Sudan to Kenya, Tanzania, and eastern Democratic Republic of the Congo, with its biggest population being in southern Africa. In southern Africa, it is common across South Africa, Eswatini, Lesotho, southern Mozambique and southern Namibia, and has an isolated population in the eastern highlands of Zimbabwe. 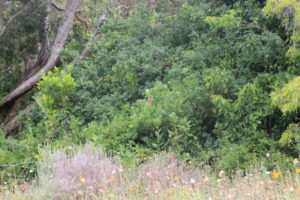 The Cape Robin-Chat is found throughout South Africa and typically occurs in thickets, riparian fringes, and forest margins, in gardens and parks. It occurs at the base of patches of bush and rock on heath-covered hillsides and at the base of cliffs. The nests are deep cut nests, usually situated on or close to the ground, in hollow stumps or on earth banks, and it is a preferred host of the Red-Chested Cuckoo.

The Cape Robin-Chat feeds on ground level, mostly in and under bushes, but will from time-to-time gather bark and foliage in tall trees. It is an insectivore, but also feeds on other invertebrates including spiders, centipedes and earthworms. It may add tiny frogs and reptiles to its diet. Some species of the robin-chats, especially the Chorister and Red-Capped Robin-Chats, eat berries as well.

SEX and LIFE CYCLES
Sex: Robin-chats lay between one and three eggs, with the exception being the Red-Capped Robin-Chat, which will lay about four eggs in one clutch. The Cape Robin-Chat can breed more than once in one season. The breeding season in Western Cape is normally from July to December. Some pairs of the Robin-Chats will raise two broods in one season. The incubation process, which is carried out by the females, lasts about two weeks, and the chicks obtain feathers about two to three weeks after hatching. Both parents play a part in feeding the young for about six weeks in total, and both parents will defend the nest fiercely, attacking snakes such as boomslang or Cape cobras.

Family life: Cape Robin-Chats are monogamous, having one partner for life unless the other partner dies, in which event the remaining party will seek out new mate. Cape Robin-Chats mate and maintain a territory for life. Both the male and female takes on the task of feeding the young, however it rests with the female to undergo the incubation process. Cape Robin-Chats are long lived, with the oldest having been recorded to have lived up to 17 years.

Cape Robin-Chats are insectivores, feeding on insects, spiders and sometimes on small amphibians and reptiles, in this way they therefore serve as predators of these animals. Their chicks are often preyed upon by snakes such as Boomslang (Dispholidus typus) and the Cape cobra (Naja nivea). Being a garden bird, the Cape Robin-Chat will also be preyed on by cats. Other enemies including crows and owls prey on the eggs, the Red-Chested Cuckoo is a brood parasite of the Cape Robin-Chat, laying their eggs in the Cape Robin-Chat’s nest to incubate and raise its young. However, crows also serve as friends to the Cape Robin-Chat as they will alert them of dangers and will help them fight off other predators such as owls.

The Cape Robin-Chat have adapted to using other birds such as crows to detect approaching dangers and also will rely on these birds in fighting off predators such as owls. They build their nests as deep cuts in the ground, this then hides their eggs and chicks to some degree. As life time partners, a pair of Cape Robin-Chats will defend their territory together and will advertise it by singing loudly. The female will also sing in the absence of a male. With natural habitat being degraded, they have adapted to using man-made structures as well for their nesting sites. 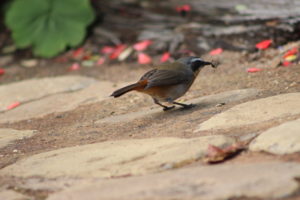 Having grown common in gardens and being an insect eater, the Cape Robin-Chat plays a major role as a biological pest control and their absence would mean an increase in insects such as termites and wasps. From time-to-time, the Cape Robin-Chats would feed on ripe fruit, and as such will serve as seed dispersers, dispersing seeds of such plants as Halleria lucida.

Should these birds decline or disappear it would mean an end to the beautiful songs sang at the crack of dawn as well as their sun set serenades.

The Cape Robin-Chat is a bird of beauty and as such it has become a favourite garden bird. It was voted as South Africa’s favourite bird in 2015 in an online poll conducted by Birdlife South Africa with 10 000 people voting in its favour. This shy bird can be daring as well, as it will approach residence porches in the areas in which it occurs in search for food such as cheese crumbs. This bird would easily serve as an alarm clock for bird lovers as it will sing at the crack of dawn and again at sunset.

Cape Robin-Chats are listed as Least Concerned on the IUCN Red List. This species has adapted to live within man-made structures, such as gardens, using structures such as gutters to build nests. Habitat destruction is therefore not a concern for this bird species. This bird species does occur in some protected areas; however there re no conservation actions taken towards it.