Skip to content
Home » Animal of the week » Carmine Bee-eater 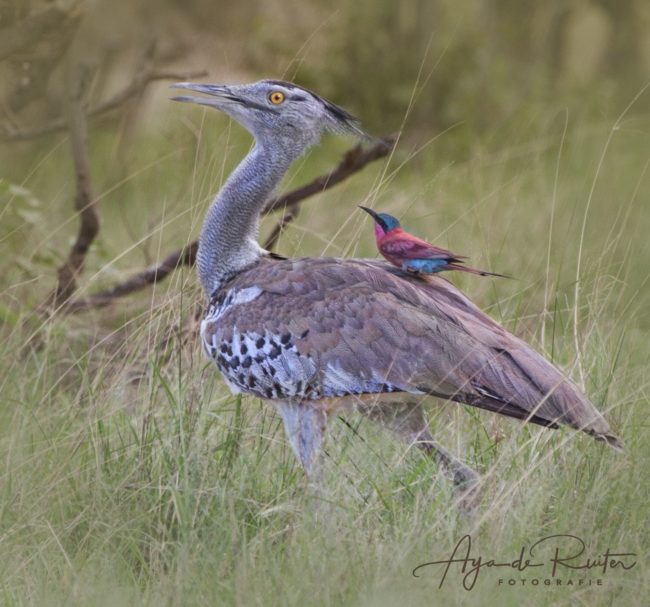 The Mandinka people of West Africa (southern Mali, eastern Guinea and northern Ivory Coast) have coined the name ‘Cousin to the fire’. The birds are referred to as such because they attend fires in pursued of insects fleeing the flames.

The insectivorous Southern Carmine Bee-eater is the largest of all African bee-eaters, which is classified in the family Meropidae, with three genera and 28 species. Bee-eaters are often spotted aerially pursuing and predating on bees, but their diet is not limited only to bees. Visual observations and analysis of bird droppings have revealed that bee-eaters also have a taste for various other insect species.

Adults and juveniles of Southern Carmine Bee-eaters are readily distinguished from each other by their plumage. Juveniles have less bright, dull brownish-pink feathers, while adults display extravagant bright reddish-pink plumage to go along with distinguishable middle brackish elongated tail streamers.

The lower limbs are snowy-grey in colour. Male and female bee-eaters are similar in size and weight, averaging 26 cm in size excluding tail streamers and weighing 62 g (Sinclair et al. 2012). When airborne, the tail appears silver-grey and the underbelly light blue.

Southern Carmine Bee-eaters travels through flight using its long-pointed wings, but it also hitch-hike on larger birds when traveling short distances or foraging.

Southern Carmine Bee-eaters are summer migrants to the woodland savanna; they have a wide distribution range within Africa. The species has been recorded in various African countries, including Tanzania, Botswana, Angola, Namibia, Zimbabwe and South Africa. In the southern African context, the species has been observed in multiple provinces including the Western Cape (Hockey et al. 2005).

Within South Africa the species is adapted to open savanna habitats. The characteristic sparse savanna terrain offers an advantage to the birds when it comes to hunting insects. Due to their high affinity to water bodies, bird colonies are usually located on flood plains associated with the rivers where they breed. They form nesting burrows on dry sandbanks. They are often spotted perching on plants suspended above aquatic systems.

The adult bee-eaters are mostly aerial foragers, their diet consists of various invertebrates (e.g. dragonflies, termites and locusts), small fish and their chicks are exclusively insectivorous. One of the behavioral traits the species has acquired, is the ability to form social relationships with other animal species.

Both the Southern Carmine Bee-eater and the Northern Carmine Bee-eater sister species have been recorded hitch-hiking on large mammals (e.g. buffalo) and large birds (e.g. Kori Bustard) when foraging. They often carry prey back to a perch, where they rub the prey against the perch to kill it; this method is effective in de-stinging bees and wasps. They frequently regurgitate pellets consisting of insect exoskeleton. 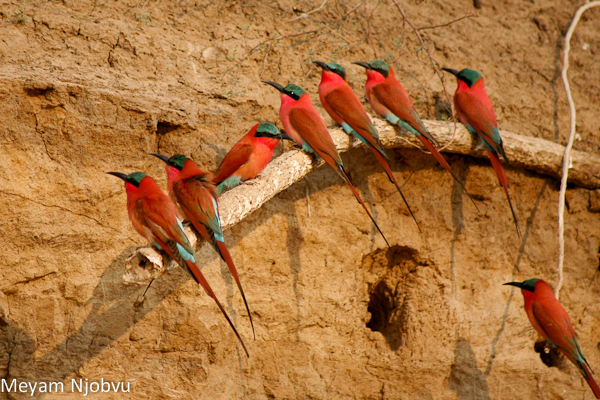 Southern Carmine Bee-eaters form monogamous breeding relationships, thus committing to a single partner. The courtship behavior involves males offering females gifts in the form of insects, and coitus follows as the female accepts the male’s advances. Normally the female reproduces about 2–3 eggs; however the chicks’ survival rate are low due to food scarcity (Hockey et al. 2005).

Both adult and immature bee-eaters have different sounds of vocalisation. Adults produce distinct calls for threats and courtship.

Visual displays of fending off other birds involves the fluffing of upper body feathers, and females usually mimic juvenile posture to receive a gift from males during courtship.

As highly sociable birds, they breed in sizable colonies of around 1000 nests on sandbanks. Southern Carmine bee-eaters perch alongside each other on flora overhanging water bodies, aerial pursuits and clashes have been observed (Hockey et al. 2005).

Bee-eaters are often spotted pursuing grass fires. This opportunistic strategy allows them to feast on insects fleeing the fire. Their migration route may trail that of locusts, which gain them access to a steady food source to maintain their energy needs for the path ahead.

The species plays a significant ecological role in the ecosystem; its biological pest control role ensure that insects are kept in check, also ensuring a balance in the ecosystem and elimination of weak members in insect populations (Alfallah et al. 2010).

Due to its extravagant plumage, some cultural groups kill the birds for their colourful feathers, and at times for food. Some beekeepers are convinced the species pose a threat to their honey-bee farms (Mikula & Tryjanowski 2020).

On the IUCN Red List, it is classified as Least Concern as, due to its wide distribution, it does not meet the criteria to be classified as Vulnerable. The exact number of the population has not been quantified and Southern Carmine Bee-eaters’ population is believed to be decreasing. Although the populations number is declining, the decline is not rapid enough for the species to be of conservation concern. For a species to be considered of concern, its range should not exceed 20 000 km2.

Various anthropogenic activities pose a threat to the species. The alarming use of insecticides for insect control, the disruption of rivers due to dam construction, and their over-exploitation for food consumption leads to the declining of the population.

Merops nubicus (Northern Carmine Bee-eater) is a sister species of the Southern Carmine Bee-eater. The species has not been documented in South Africa; it is nomadic to Zambia (Sinclair et al. 2012). Interestingly, although spatially separated, these two sister species have evolved the similar behavior of bird–bird hitch-hiking on large birds, specifically  the Kori and Arabian bustards.

Bee-eaters are from the order Coraciiformes. They are related to rollers, kingfishers, hornbills, among an array of diverse other bird species. An interesting fact about this order is that both bee-eaters and rollers host a similar feather louse of the genus Meromenopon. This entails a strong evolutionary affiliation between these related species.